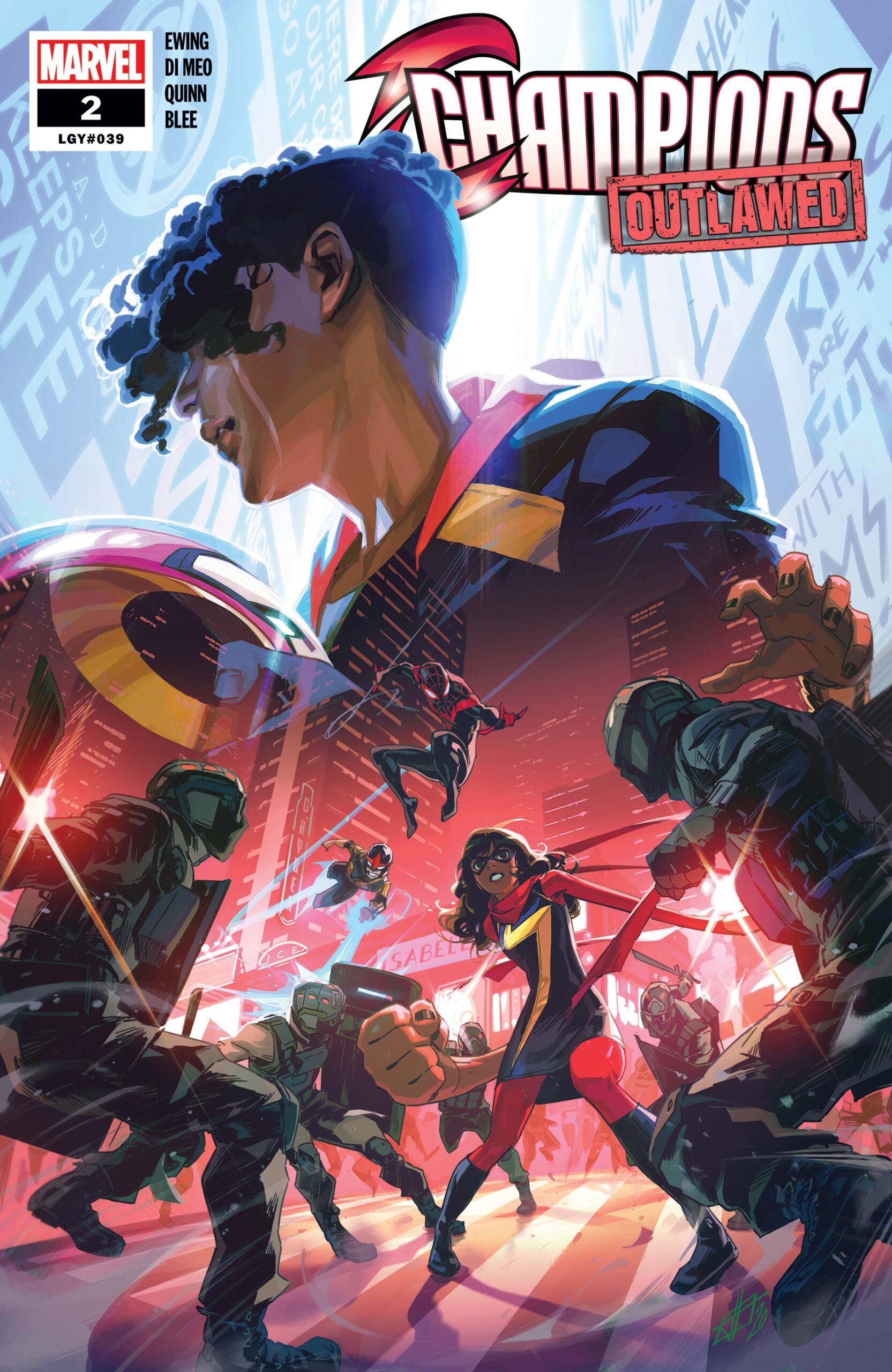 I love the nuance and depth of storytelling that comes with these young heroes trying to come to grips with a world where some people fear them and are using the government and police forces to project that fear. Spoilers below!

Writer: Eve Ewing
Penciler: Simone DI Meo, Robert Quinn
Cover Artist: Antonio Infante
When clashing protests over the teen vigilante ban break out across Chicago, the Champions risk their freedom to protect the young protestors from overzealous C.R.A.D.L.E. agents — but Chicago’s own hometown hero, Ironheart, is nowhere to be seen. Where is Riri Williams? Why has she abandoned the Champions? And could it have anything to do with the mole in their ranks – ?

First we get a look at one of C.R.A.D.L.E.’s “reeducation centers” where a group of teens are being lectured to on the dangers of kids with powers. Two of the teens push back and are about to activate their powers when Timeslip runs in and makes them disappear. There are always those working against their own people.

In Chicago there’s a protest against Kamala’s Law, which is interrupted by counter-protestors. Predictably, things escalate and the police start making arrests. Kamala, Miles and Sam are watching things unfold. Nova wants to intervene and help those getting arrested, but Miles and Kamala aren’t so sure. Kamala tries to call Riri since it’s her turf, but she doesn’t respond. C.R.A.D.L.E. agents arrive on the scene, and eventually Sam decides to jump into action with Kamala and Miles forced to follow suit. They face a rude awakening when some of the counter-protestors start throwing things at them. This was a poignant scene as the young heroes are faced with the reality that there are a group of people who vehemently object to their presence and don’t want their help.

At Riri’s house, she’s stuck on her couch and doesn’t see motivated to do anything. Her mom tries to encourage her, and Xavier stops by and tries to get her out, but nothing works. Suddenly Miles, Kamala and Sam show up at her door trying to escape the crowds. The four have a lengthy discussion on what happened to the team previously and things get heated until a large squad of C.R.A.D.L.E. agents arrive.

There’s a brief cut away where Viv Vision is alive and on the run while watching things unfold at Riri’s house just as the Champions take on the C.R.A.D.L.E. goons.

There’s a lot to like about this issue. It’s easy to empathize with struggles that the Champions are dealing with, both internally and between each other. They’re all shaken and don’t know exactly what they should do. There’s even a brief moment when Miles says that maybe they should just turn themselves into the C.R.A.D.L.E. agents. I appreciate seeing how each of them are dealing with the issues in different ways. Especially with Riri, there’s a great moment when Sam thinks she wants to quit being Ironheart and goes on a long, heartfelt monologue about how Riri may not need Ironheart, but Nova is all he has. You think that speech is leading to some kind of inspirational moment, but Eve Ewing turns that moment on its head as Riri scoffs at him, saying “One day, you and me are gonna have to fight.” I also love the art by DI Meo and Quinn in this book. They do a great job making each of the Champions emotive in distinct ways.

In a lot of ways, the idea of Kamala’s Law harkens back to Civil War and the Superhero Registration Act. And while this run isn’t as high profile as Civil War, it feels more real because there are citizens and law enforcement involved.

Whenever you have a story dealing with something as broad as legislation against superheroes, you would think the heavy hitters would get involved. That’s both a crutch and a hurdle for any shared universe storylines. Maybe this is coming, but you’d think the Champions would seek some guidance and support from higher level superheroes. I get that it’s a more interesting story to have these young heroes figure it out on their own, but eventually an Avenger or someone on that level is going to have to at least be accounted for.

Champions is one of the most diverse books in comics and I just love this squad. It’s fun to see Riri moping on the couch at home in Chicago as her mom tries to cheer her up. Ewing is the perfect writer for this book and no surprise, her voice really shines when she writes Riri’s lines.