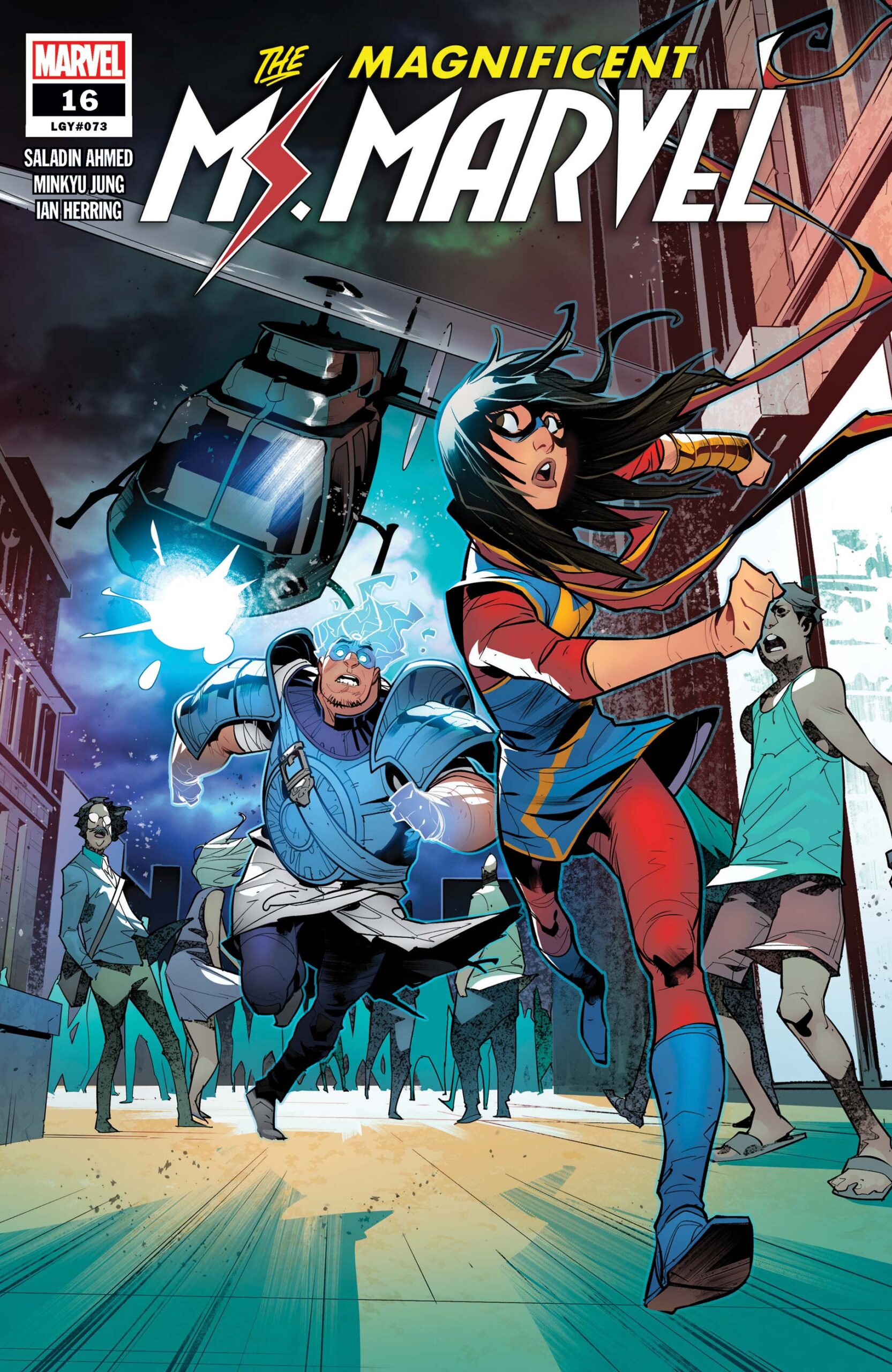 Marvel Comics The Magnificent Ms. Marvel from Saladin Ahmed and Minkyu Jung has been a really exceptional run and reinforced Kamala Khan as one of the best and most important characters in comics today. Last month, Marvel announced that the series would be coming to a close with issue #18 in January 2021. While I feel pretty confident that we’ll be seeing a relaunch of a Kamala book very soon, it’s still the end of an important era for the character.

Issue #16 continues to story of the fallout from “Kamala’s Law” banning underage superheroes and the government agency C.R.A.D.L.E. enforcing that law. If this sounds all too similar to real world xenophobic policies and the government agencies that enforce those policies, I’m assuming that’s the point. Ahmed and Jung crafted a really well told story that balances the monsters hunting down underage superheroes, and mythical monsters that actually feel easier to deal with. Spoilers below!

Writer: Saladin Ahmed
Penciler: Minkyu Jung
Cover Artist: Eduard Petrovich
AMULET RETURNS – just in time for C.R.A.D.L.E. and Dum Dum Dugan to crack down on the teen heroes of Jersey City! An arcane horror threatens everything Amulet and Ms. Marvel hold dear – but can they do anything to stop it when they could be arrested at any moment?

Following the events of Outlawed and Champions, “Kamala’s Law” is very divisive, and that division is even impacting Kamala’s own family, as her parents argue over whether Ms. Marvel is dangerous. The government is using Kamala as the poster child for a law she doesn’t even support, but her family won’t let her speak out against it for fear that it will make her a target. This moment rang so true to the immigrant family perspective of wanting to stay out of trouble.

Kamala can’t find peace at home or at school, as her friendships are strained. Zoe is MIA, Mike is avoiding her and Bruno seems eager to get away. Thankfully, Nakia at least seems to be the kind of friend Kamala needs right now.

Later, Kamala heads to a juice bar to study when C.R.A.D.L.E. agents burst in looking for another young hero named Amulet. When the juice bar owner expresses skepticism that their warrant is legit, he gets threatened with arrest and the whole situation escalates. Kamala sneaks out intent on helping as Ms. Marvel when she runs into the superhero in question. Ms. Marvel warns Amulet about the situation inside, and he tells her that he’s on the hunt for actual monsters who eat people and can use some help. The two hunt down a mythological Ghul in the form of an old lady possessed by a cursed amulet. After the battle, Amulet shares his real name, Fadi Fadlalah, and while Kamala wants to reciprocate, until fear for her family makes her reconsider.

The book ends with C.R.A.D.L.E. agents getting a call from someone who sure looks like Nakia saying she can help find Ms. Marvel. Nothing is sacred!

This story hit home and felt so much like what many are facing in the real world. The constant dread of government agents crossing legal boundaries to execute xenophobic policies lingered over the whole story and Ahmed did an excellent job of weaving that into the plot. It was actually a relief when Kamala and Amulet went off to hunt the Ghul and we got some good, old-fashioned, monster action . Sadly, those other kinds of monsters can’t just be beaten with a few punches and I’m sure Kamala will have to deal with that in the next couple of issues.

The story is rightfully told from Kamala’s point of view, so when she runs into Amulet and the two adventure off, we never see how the situation in the juice bar resolves. While I get that it’s not a major plot point, it was unsatisfying that that situation was tied up with a dismissive comment by Amulet that the juice bar owners can take care of themselves. Maybe we’ll learn what happened next issue.

Kamala Khan’s story is impactful on so many levels, and this book was just another example of how important it is to tell socially relevant stories in this format. Black and brown people in our world regularly suffer through what our young heroes are dealing with due to Kamala’s Law and C.R.A.D.L.E. and I hope all readers will make the connection.