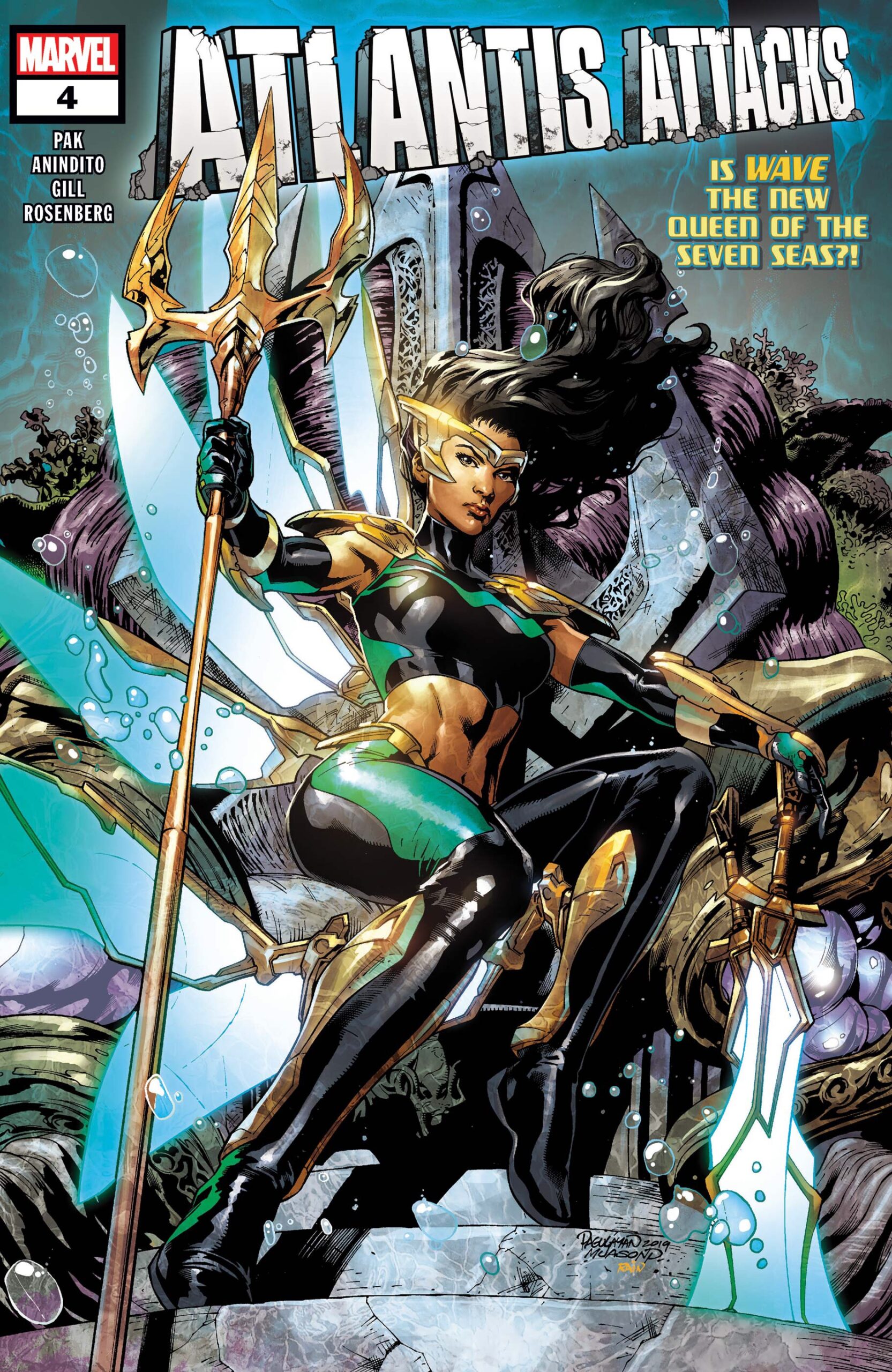 The Agents of Atlas (old and new) finally find out who Earth’s “true rulers” are in the return of Marvel Comics series Atlantis Attacks. This series started way back in January (remember that time?) and got through three strong issues before Marvel (and the rest of the world) shut down due to COVID-19. Finally, 9 months later, Atlantis Attacks returns with issue #4. Spoiilers below!

SECRETS REVEALED! For months, the young AGENTS OF ATLAS have served secret agent Jimmy Woo’s Atlas Foundation and defended billionaire Mike Nguyen’s Portal City of Pan. But as their efforts to defend Pan from KING NAMOR and ATLANTIS rip the hard-fought unity of their team to pieces, Silk and Amadeus Cho finally fight to find out if Woo and Nguyen have been guiding them – or manipulating them. And why is new Agent of Atlas WAVE sitting atop the Atlantean throne? What’s Jimmy’s true endgame? Is Nguyen a visionary or villain? The curtain’s ripped aside – and the Agents of Atlas may never be the same!

There are three factions at play in this story: 1) Namor and the original Agents of Atlas, 2) The New Agents of Atlas, and 3) Mysterious Pan creator, Michael Nguyen and the Sirenas (Ancient enemies of the Atlanteans).

Namor thinks that the New AoA betrayed him and is on the warpath. In response, mysterious Pan creator Michael Nguyen enlisted the aid of the Sirenas to travel to Atlantis and threaten its destruction while Namor is on Pan. The New AoA try to repel Namor so that the innocent citizens of Pan don’t become collateral damage, and the original AoA…well, they’re kind of caught in the middle. They’re technically allied with Namor (his cousin Namora is one of their members after all), but they’re not necessarily up for mass death and destruction.

Namor takes on almost the whole New AoA squad and gains the upper hand, which prompts holographic Nguyen to show up and try to negotiate a deal. His leverage is that if Namor doesn’t stop, the Sirenas will destroy Atlantis. Namor doesn’t take too kindly to that negotiating tactic and instead threatens to destroy all of Pan and Nguyen himself. The New AoA continue to fight valiantly but are barely hanging on.

Then Amadeus Cho and the original AoA show up and don’t know exactly what to do. Cho begs for the fighting to stop and demands that Jimmy Woo come clean and reveal his secrets. Woo admits that the world is ruled by ancient dragons, one of which is the AoA “advisor” Mr. Lao. There are three dragons vying for world domination (it always seems to come to that), but since a direct battle would destroy all of Earth, they use people as pawns. Upon hearing this, all the parties decide that the best course of action is to find Nguyen and figure out exactly what his scheme is.

In the meantime, the Sirenas, accompanied by Wave, reach Atlantis only to be attacked by the Atlantis dragon, which has gone berserk on the Atlanteans as well. Amazingly, Wave is able to put it down, saving Atlantis (again), and becoming the people’s champ. The Atlanteans start chanting her name just in time for Namor to arrive. The king is thrilled at his people chanting someone else’s name. Just how powerful is Wave anyway?

Finally, back on Pan, Amadeus and both versions of the AoA discover Nguyen’s underground hiding place. Nguyen’s a smart guy and is prepared for this scenario, as he immediately activates what looks like a spider arc reactor that attaches itself to Cho’s chest, causing him to Hulk out and fall under Nguyen’s control. Now the collective AoA have to fight one of their own.

King Namor – This issue really shows the power of the King of Atlantis. The New AoA aren’t exactly a team of bums, but Namor takes them on single-handedly and mostly comes out on top. Writer Greg Pak made it a point to show just how much more powerful Namor is compared to the rest of the “kids” and it was impressive to watch. Namor is literally a force of nature and we don’t get to see that often enough in comics.

Massive Cast – Not only are the New Agents of Atlas already a large team, but the last couple of issues have brought in so many additional characters and factions that it’s really starting to become difficult for any character to do more than show up in one panel. It’s almost like the WWE Royal Rumble with someone new running in every panel to have their brief moment before joining the mass conglomerate in the ring. If you’re a fan of any one of these characters, with the exception of Namor and Amadeus Cho, they don’t do much.

My gripe above notwithstanding, it is amazing that there’s a series that features almost every Asian superhero in Marvel Comics. What Greg Pak and the creative team have created feels like its own distinct Asian superhero universe, almost like an Asian Milestone, and it’s so much fun. This is the third straight miniseries for this team though and I really hope that more of the characters get a chance to shine in their own books (currently Sword Master and Aero have ongoings), and that the New Agents of Atlas are given an ongoing next. It’s time to put a ring on it Marvel!