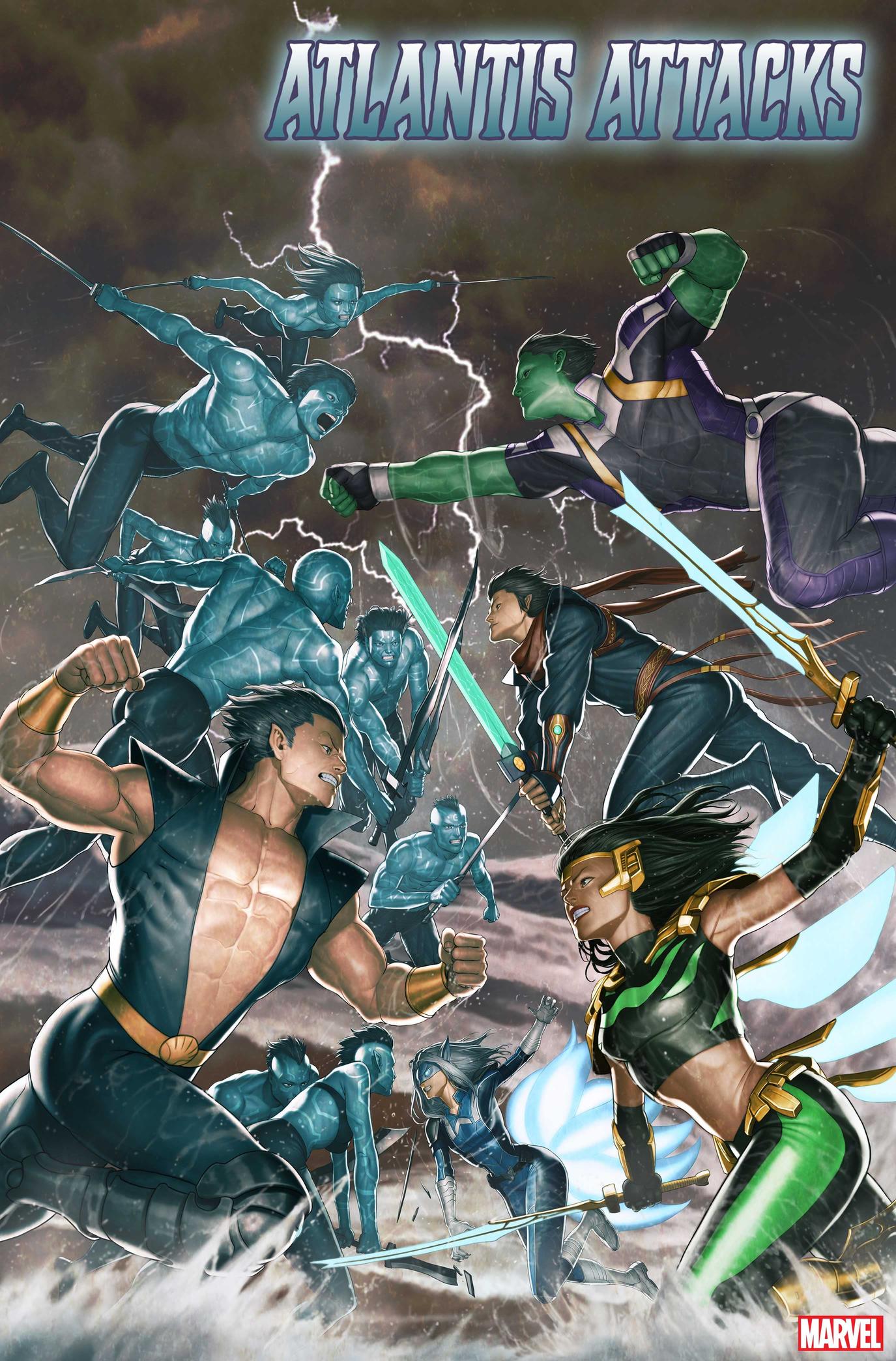 The Agents of Atlas are back with a five-issue miniseries called Atlantis Attacks, featuring a battle with the always prickly king of Atlantis – Namor McKenzie (yes that’s really his canon last name).

Despite Namor’s very not-Asian surname (in the comics canon, Namor’s father was an American named Leonard McKenzie), there’s been a bit of a groundswell on social media over the last few years to claim the character as part Asian or Pacific Islander. With the live-action version of DC’s Aquaman being played by Jason Momoa, who is part Native Hawaiian, many fans have been attracted to the idea that when we eventually see Namor in the Marvel Cinematic Universe, he too should be played by an Asian/Pacific Islander actor. All that’s to say that it feels very appropriate that the most Asian comic in the Marvel comics roster would bring in Namor for a major storyline. Spoilers below!

This is actually the second Marvel event bearing the name “Atlantis Attacks.” The original, which was published in 1989, featured Namor teaming up with the Avengers and the Fantastic Four to fight off an attack on the surface by Atlantis.

For this latest story, we see King Namor attacking the appropriately named multi-Asian city of Pan, when it is revealed that the city’s magic is being powered by a dragon of Atlantis. The Agents of Atlas, led by Amadeus Cho, recognize that it’s not a morally acceptable situation to keep a creature like the Atlantis dragon captive for the benefit of Pan and its mysterious CEO, but have little choice when freeing the dragon without an alternative power source could lead to extensive casualties among the Pan citizens.

Namor attacks Pan, but is intercepted by Cho and his team. Cho begs Namor for some time to figure out alternative arrangements and it takes the collective show of force of the whole Atlas team to convince Namor to give them one day to figure it out.

With just one day, what’s Amadeus’ plan to save Pan? Apparently the answer lies with the return of the original Agents of Atlas founder Jimmy Woo, who has reformed the original team for help!

The Good
Reunited and it feels so good – seeing the return of original Agents of Atlas, a team that had such a fun and pulpy comic run, was really exciting for me. If you haven’t read the 2006-2007 Agents of Atlas series, I highly recommend it. Seems like a good time to catch up before Atlantis Attacks really picks up.

Namor – Namor is an interesting comic character. He first appeared way back in 1939. That’s before characters like Spider-Man (1962) and Black Panther (1966). He’s known as the “First Mutant” and he’s been a part of the Avengers, the X-Men, and was one of only six members of The Illuminati, a secret group of special beings in Marvel comics brought together by Tony Stark. Namor clearly holds a special place in the Marvel comics pantheon. And yet the character has struggled to maintain popularity and hasn’t had an individual on-going comic since 2011. That’s nearly a decade! Given all that, I’m happy to see Namor in a featured role next to the Agents of Atlas. It’ll be fun to see his dynamic with all the other characters, especially considering the Atlas team is primarily made up of younger heroes and Namor doesn’t generally play well with others (ask T’Challa).

Super Asian Team-Up – Obviously I love the Agents of Atlas because it’s basically a giant team of Asian comic superheroes. The Agents of Atlas mini-series, which led right into Atlantis Attacks, was really the origin story of the group and we got to see them meet each other, struggle through some growing pains, and ultimately come together. It’s pretty cool now in this mini-series to see them as a real “team”, and there’s one pay off moment that really hammers that home. I’d say this book is worth it based on that one page shot alone.

Give us an on-going! – This isn’t really a “bad” about the comic, but I really hope Marvel commits to a true on-going Agents of Atlas comic after Atlantis Attacks. While I enjoy the “event” format of a mini-series, it would be great to know that the Atlas team is going to stay around a while so that the stories can breathe a bit more. Going from War of the Realms to one 5 issue mini to another 5 issue mini leaves only so much room for long form storytelling or true character development. And especially on a team like this with so many members, it’d be nice to see more team development that an on-going can allow. It’s time.

Asian Comics Representation – The  Agents of Atlas are essentially an Asian comic character incubator program. With the recent push for more diversity and the desire by basically every major U.S. company to tap into the potentially robust Chinese market, Marvel looked around and realized that it didn’t have many (any?) major Asian superheroes. That’s not unique to them since DC isn’t exactly doing much better now that the Kenan Kong and the Justice League of China are on the shelf. Thus, instead of introducing new Asian superheroes piece by piece in different parts of the Marvel comics universe, they decided to make the bold move of bringing established and new characters together to form this giant team. It’s pretty cool to see Shang-Chi and Jimmy Woo team up with Wave and Sword Master. I just wonder what the next step is in this process. Like I mentioned above, I hope we get an Atlas on-going after this. I have to think a Shang-Chi mini and/or on-going is in the works given that the MCU film is just about 1 year away. Sword Master and Aero have on-going comics as those characters were specifically created for the Chinese market. I hope we continue to see more of these characters given a chance to shine individually and as a team in 2020 and beyond.