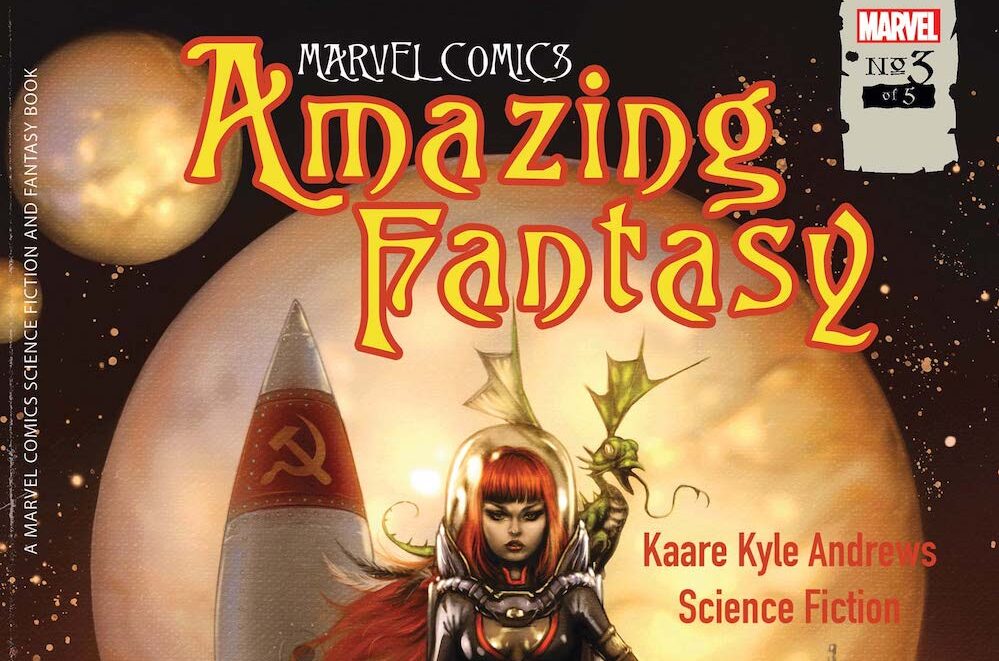 The current Marvel comics Amazing Fantasy miniseries by Kaare Andrews echoes back to 1962, when Spider-Man debuted in Amazing Fantasy #15. So of course, it’s only fitting we see teenage Peter Parker in this current run of Amazing Fantasy (2021) too. This miniseries has taken some of Marvel’s most iconic characters and reimagined them in a fantasy world in the vein of Dungeons and Dragons. In issue #3, we’re in for a doozy of a battle. Spoiler – I’m going to be kinda critical here!

Amazing Fantasy #3 is available now at your local comic book shop! Spoilers below!

Writer: Kaare Andrews
Penciler: Kaare Andrews
Cover Artist: Kaare Andrews
EXPERIENCE THESE HEROES LIKE NEVER BEFORE! On this amazing island of fantasy, World War II Cap, teenaged Spidey and spy school Black Widow have found their tribes. They must now meet on the battlefield of death. The stage is set. The actors are in place. All that’s left is WAR. Or is there one last chance to stop it all?

REVIEW – Players are in place – Fight!

When this miniseries started, I was really intrigued by the concept. The idea of World War II Captain America, Red Room Black Widow and teenage Spider-Man plucked from their respective debut time periods and thrown together in a fantasy adventure sounded fascinating. I thought they would try to search for a way home, and along the way, stumble into each other. Instead, each hero has fallen into specific warring groups within this fantasy world, and in Amazing Fantasy #3, these conflicting fractions come to the fore.

What is confirmed in this issue is our heroes have passed on to some afterworld for the dead. And having that part of the world and story confirmed sure acts as a foreshadowing to the brutal battle and violence that’s to come. Captain America fell in with a clan of cat-people, and despite efforts to save one woman’s child, the kid unfortunately does not survive. This really becomes the catalyst for Cap completely losing it, because he’s ridden with guilt from the death of his fellow soldiers (back in issue #1!). While the battle scenes were dynamic and energetic, the central conflict in the story so far feels a bit too straightforward; though I think that may change given how this issue ended. The conclusion to this issue was pretty exhilarating! I did not expect Uncle Ben to throw Peter under the bus and unleash further chaos.

There is one thing that bothers me about Amazing Fantasy so far, and that is how women are characterized and represented. At the start, I was hoping maybe some cliches were to pay homage to the source material of Dungeons and Dragons (still troubling), but I’d hoped the comic would move into a different direction. I’m disappointed in how women are characterized and represented in this comic thus far, primarily as love interests, mothers and/or bodies. I’m also a bit dubious of how Black Widow is characterized, and even the way Captain America is used in this story is very hyper-masculine. The comic on this front is treading on some old tropes and stereotypes, such as how women’s bodies are presented as slim and slender.  Given the source of inspiration for the comic, table top games and RPGs, that part of pop culture has had to also reckon with sexism and misogyny. I was hoping this part of the comic would be different.