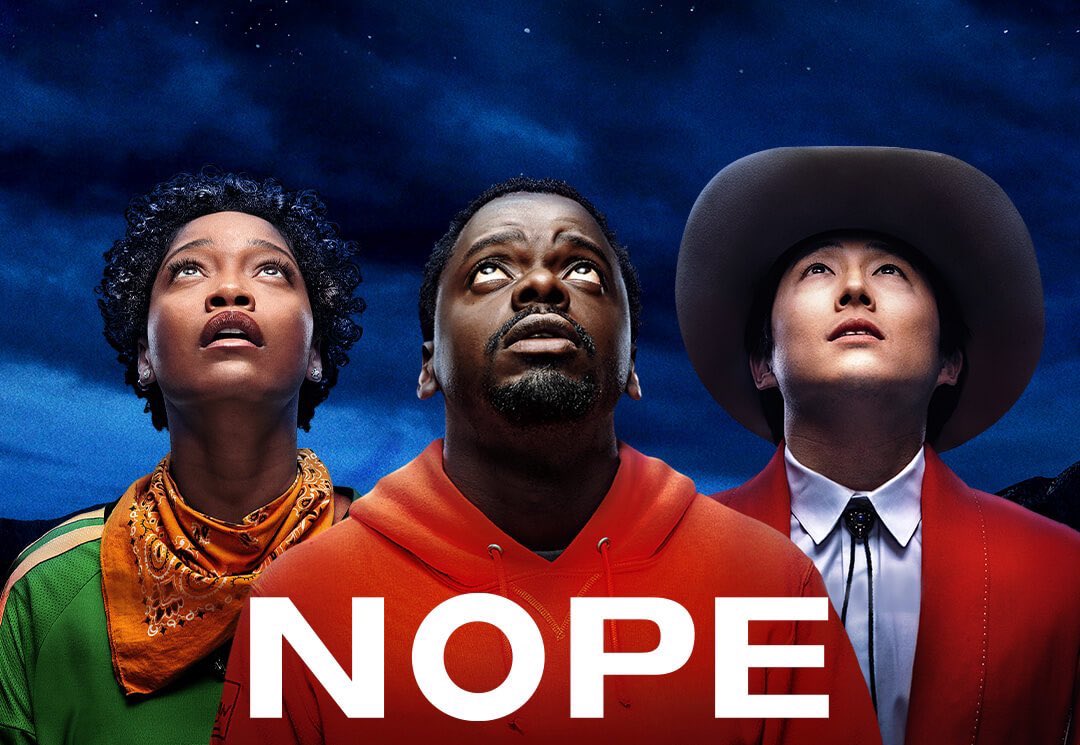 Jordan Peele is one of a quickly dwindling number of directors who can get audiences to theaters simply on name alone. People don’t have to know much about a Jordan Peele movie (indeed, we often don’t know much at all). All they need to know is that Peele is directing and they’ll be watching.

Peele effectively created his own sub-genre of film, affectionately referred to as “social thrillers,” with Get Out and Us. Those two films are distinctly different stories from one another, and with his latest feature, Peele takes yet another approach.

Nope, which was shot in IMAX, is Peele’s biggest spectacle yet, featuring stunning visuals around an incredibly talented cast. Daniel Kaluuya, who also starred in Get Out, returns to the fascinating world of Peele’s mind, along with Keke Palmer, Steven Yeun and Brandon Perea. The chemistry between the cast is as stellar as the visuals.

However, unlike Peele’s first two films, the social commentary and symbolism embedded in Nope sometimes overshadow the overall plot, resulting in a film that’s ambitious and enjoyable, but ultimately not quite as satisfying. As with any Peele film however, there’s a lot to dissect, and the deciphering of all the metaphors and the societal reflection that the film inspires are worth the price of admission.

Nope premieres exclusively in theaters on July 22, 2022! Light spoilers below!

Oscar® winner Jordan Peele disrupted and redefined modern horror with Get Out and then Us. Now, he reimagines the summer movie with a new pop nightmare: the expansive horror epic, Nope.

The film reunites Peele with Oscar® winner Daniel Kaluuya (Get Out, Judas and the Black Messiah), who is joined by Keke Palmer (Hustlers, Alice) and Oscar® nominee Steven Yeun (Minari, Okja) as residents in a lonely gulch of inland California who bear witness to an uncanny and chilling discovery.

Nope, which co-stars Michael Wincott (Hitchcock, Westworld) and Brandon Perea (The OA, American Insurrection), is written and directed by Jordan Peele and is produced by Ian Cooper (Us, Candyman) and Jordan Peele for Monkeypaw Productions. The film will be released by Universal Pictures worldwide.

The stars shine brightly. If there’s one reason to go watch Nope, beyond the strength of the director of course, it’s to see an incredibly talented cast make magic. Academy Award winner Daniel Kaluuya and the irrepressible Keke Palmer play siblings OJ and Emerald, who are in the business of training horses for TV and film. The two are polar opposites, as the former is quiet and reserved, weighed down by responsibility, and the latter is dynamic and outgoing, ready to embrace the world.

Kaluuya and Palmer are perfectly cast in their respective roles, and the two share an easy chemistry that feels like a genuine family relationship. Kaluuya exudes a subtle confidence, while Palmer crackles with energy. It’s fun to see them play off each other, and their dynamic is critical to this film as it’s the central relationship in the story.

Joining the pair are Steven Yeun and Brandon Perea, both of whom maximize their material. Yeun is so good at playing a character who seems perfectly happy on the outside, while hiding something more troubling on the inside. Yeun’s Jupe is the consummate showman, with a flair and exuberance that Yeun seems to relish.

Perea, in his biggest role yet, is an absolute joy. He revealed that he took a different approach in auditioning for the role of Angel than what was originally in the script, and Peele enjoyed it so much that he re-wrote the character for Perea. The change was a stroke of genius, as Perea’s Angel is hilarious and relatable. If there’s a character in the film that audiences will most likely connect with, it’s Angel.

Rounding out the primary cast is Michael Wincott, who plays a legendary cinematographer that the siblings enlist for his expertise. With a commanding voice that sounds like he drank a gallon of gravel, Wincott brings a weight to the film that balances the youthful exuberance of the rest of the cast.

The incredible cast is highlighted and bolstered by visuals that only IMAX cameras can capture. For a film that consistently focuses on shots of clouds in the sky and the sweeping prairies where OJ and Emerald keep their horses, the visuals never get boring. Instead, each wide shot feels sprinkled with hidden meaning, making the audience strain forward in search of seeing the unseen. Nope is Peele’s biggest blockbuster like film yet and there are so many memorable shots and moments that justify the extra cost of an IMAX ticket.

Despite the strong performances of the cast and the impressive visuals, the film’s plot sags from the weight of the metaphors and symbolism. Jordan Peele’s films all have something to say about society, and while Nope is no different in that regard, the message overwhelms the story.

One can’t help but wonder if Peele’s films will suffer from expectations in the same way that M. Night Shyamalan’s did. With Shyamalan, every one of his films after The Sixth Sense was expected to have some unpredictable twist, to the point where audiences became more interested in figuring out the twist instead of enjoying the film as a whole. While the expectations are not quite as specific for Peele’s films, there’s certainly much anticipation on how Nope will follow up on the uniqueness of Get Out and Us.

It’s in that uniqueness where Nope falters. While it is Peele’s biggest spectacle, there seems to be more focus on the visuals than the full development of the plot. For a Jordan Peele film, one expects layers and depth in the storytelling that isn’t quite as prevalent here. Instead Nope is surprisingly straight-forward.

Nope is a meal with some wonderful ingredients and incredible plating, but there was something missing in the recipe that prevents it from being a fully satisfying feast.

Nope is a smashing success in featuring people of color. One would be hard pressed to find another blockbuster film, written and directed by a Black creative, and starring two Black talents, along with two Asian co-stars (Perea is Filipino and Puerto Rican).

It’s notable too that the story doesn’t necessarily require a diverse cast and doesn’t dwell constantly around the fact that the characters in the story are people of color. Instead, the four stars simply get to be present, on-screen, and let their talents shine.