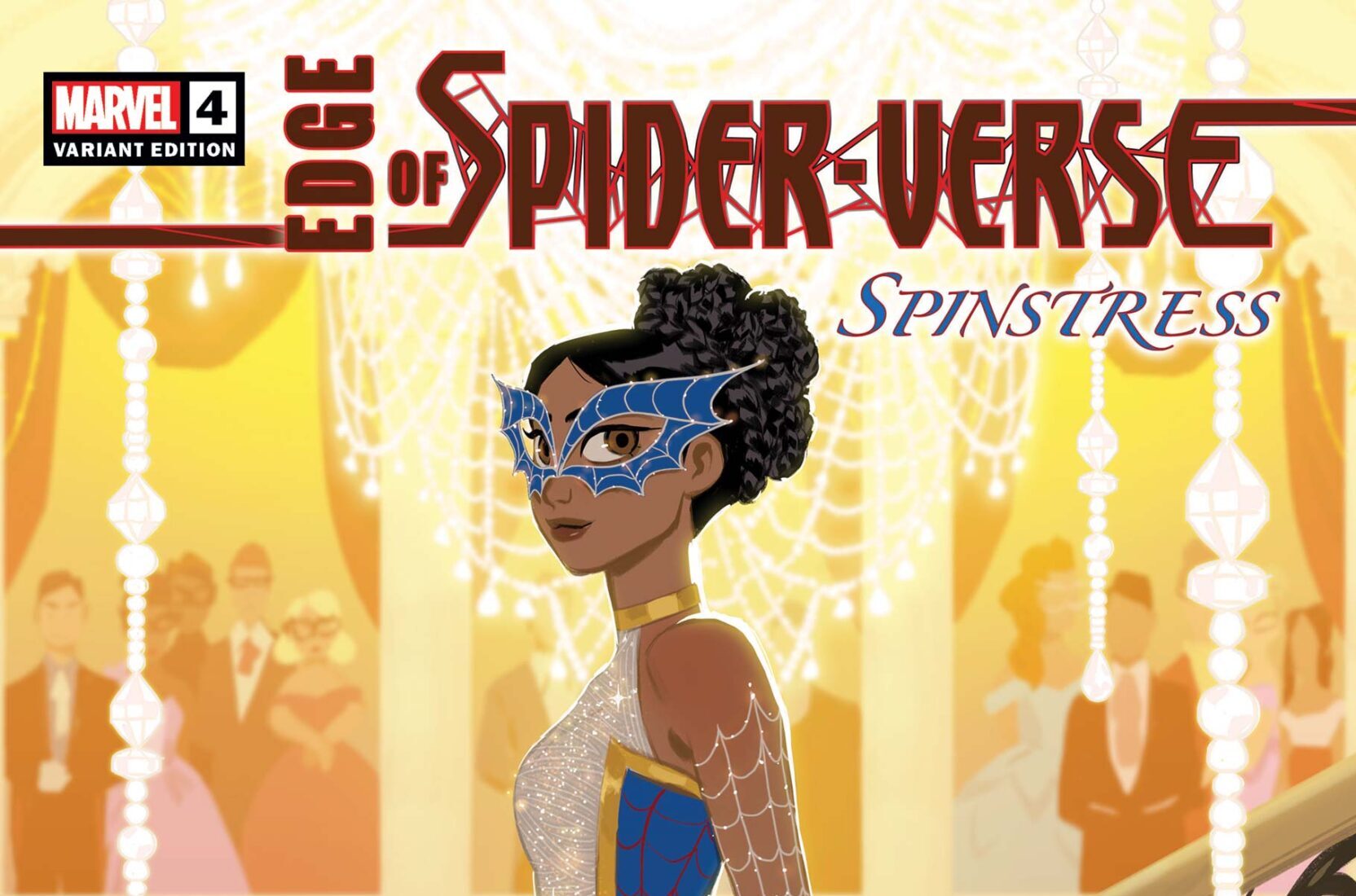 The Spider-Verse is always fun to explore, because it really gives readers a look at how anyone (or anything for that matter) can be a superhero with the powers of a spider. The latest installment of Edge of Spider-Verse features an interesting array of Spider-Man inspired characters with one clear standout.

Edge of Spider-Verse #4  is available now at your local comic book shop! Spoilers ahead!

Writer: Tee Franklin, Dan Slott, David Hein, Jordan Blum
Penciler: Ty Templeton, Luciano Vecchio, Nathan Stockman
Cover Artist: Josemaria Casanovas
Spider-Ham! Spider-Mobile! Sun-Spider! Spinstress! You know the first two, but you may not remember the Amazing Sun-Spider who debuted in 2020’s SPIDER-VERSE miniseries as a winner of our Spidersona contest! She gets her own story here! Spinstress is a brand new Spider-Princess who sings, talks to a spider and kicks villainous butt! And the writers of the Broadway smash hit “Come From Away” are bringing her in for a landing!

REVIEW – Spinstress Steals the Show with a Regal Debut

A talking pig and an anthropomorphic car, a high-schooler with Ehlers-Danlos syndrome and a princess are an intriguing combination of characters, and they’re the featured lineup of spider-powered heroes in Edge of Spider-Verse #4. While each character-focused narrative leads into a larger story, The End of the Spider-Verse, to be addressed later on, each one still stands on its own as a way to highlight the hero in the spotlight.

Some fall flat, others are fine, and one shines with a glimmer to rival a princess’s crown.

“Once Upon a Spider: The Spider-Princess” takes place on Earth-423 and centers on Princess Petra. From the opening sequence, Spinstress’s story is clearly a Disney princess take on Spider-Man, and I mean that in the best way possible.

The first scene is reminiscent of the start of Beauty and the Beast, when Belle is going through town and singing. As I read the lyrics that Princess Petra, who becomes Spinstress later on, was singing, I tried to match them to the melody of “Belle” (until it became clear it wouldn’t match up throughout).

From the animal sidekick to the villain, it takes elements from various princess stories and fairytales and weaves them (pun intended) with Spider-Man flair. The narrative is fun, heartfelt, well-done, and as great as would be expected from David Hein — one of the writers for the Tony Award-winning musical Come From Away. Give me a whole Spinstress series written in this style, and I’m sure it’d become a favorite of my musical-loving self.

The coloring of Spinstress’s narrative is also really compelling, and I’d love to read more about her heroics and how she deals with the self-conflict she’s been dealt.

Sun-Spider has the second-best narrative in the issue. It felt a bit slow to begin and picked up later, but would’ve benefitted from more time. Really, it’s unfortunate, because it is very cool to come across a superhero who uses a wheelchair and crutches. So hopefully Sun-Spider has more stories to come. The fact that Sun-Spider’s costume also includes a backwards snapback is awesome.

Spider-Ham’s adventure is amusing given the inclusion of Pete Spiderman, a rather mundane everyday suburbanite who rocks a fanny pack and cargo shorts. He very much gives off “dad energy,” as Gen Z would describe it, which makes the pairing fun to follow. It provides the quippy humor I expected but isn’t anything particularly special. It does give us more Peter Porker, and sometimes that’s all you need.

Conceptually, Spider-Mobile is cool but left more to be desired. It’s a quick and cheesy read, and maybe I just expected too much from it, because cars have the connotation of a cool factor. But I did find it to also be a bit witty, which was appreciated.

Even if some characters had more compelling stories to offer than others, what’s wonderful about this issue (and the preceding issues of Edge of Spider-Verse) is that they’re fun and a showcase of how one idea can spur a world of creativity.