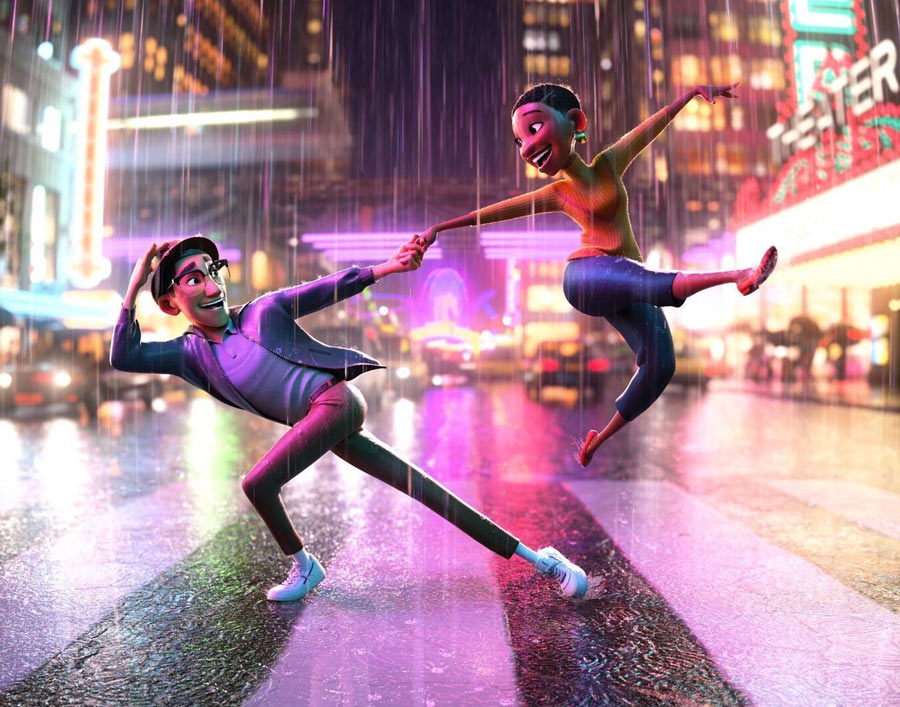 Walt Disney Animation’s Us Again is 7 minutes of beauty, joy and warmth. The studio’s first theatrical short in five years, Us Again will be premiering with Raya and the Last Dragon on Disney+. It’s an appropriate pairing, as the two animated films center diverse characters and tell emotionally satisfying stories.

Directed by Zach Parrish, with Brad Simonsen producing and the acclaimed Filipino dance couple Keone and Mari Madrid as the choreographers, Us Again tells a genuinely touching story about an older mixed-race couple that is sure to resonate with audiences of all ages.

Us Again premieres March 5th in theaters worldwide with Raya and the Last Dragon and will be available on Disney+ in June! Spoilers below!

A grumpy old Asian man wants to do nothing else besides sit in his recliner and stew. His wife, an older Black woman, literally pulls him up and tries to remind him to enjoy the life they have, but he refuses.

Once night, a downpour of rain magically restores the couple’s youthfulness, and the two dance through the city, once again full of life.

However, the couple must stay under the pouring fountain of youth, and the man is determined to do just that. As the pair dance and rekindle the romance in their relationship, the man’s desperation to remain forever young is apparent. Through it all, his wife continues to try in vain to show him that it’s not their age that prevents them from enjoying life, but his disposition.

As the rain leaves, taking their youth with it, the woman has almost had it with her husband. Thankfully, he realizes just in time what she’s been trying to show him the whole time, embracing her and the current stage of their lives together.

There is no dialogue in this short film. Instead, the story is beautifully told through music, animation and dance. All three of those elements are masterfully done and come together in such a perfect way that dialogue would have only crowded the story.

Every element in this story is in synergy, between the dance choreography, the music, the lighting, the facial expressions, and even the rain drops. It’s just a wonderful combination of non-verbal story-telling techniques that result in an emotionally impactful story about growing old and appreciating every stage in life.

The music is light and fun, the colors are bright and vibrant, and

If you’re at at all feeling like you’re past your prime and life is starting to pass you by, Us Again, will resonate with you. And it should, because it’s too easy to waste the precious moments we have in life thinking about the past.

Even if you’re young, the film is an important reminder to appreciate the time you have left with all of our loved ones.

Considering the circumstances that we’ve all been dealing with over the last year, there’s never been a better time for these kinds of reminders.

There’s simply nothing bad to say about Us Again except that it made me feel emotional.

Us Again features a Black and Asian couple, which is virtually a non-existent pairing in pop culture media. What’s also great is that the story has nothing to do with the couple’s race or color. They’re simply a couple going through a rough spot in life and just happen to be Asian and Black. I love that the film normalizes telling a universally relatable story through the lens of a mixed-race couple.

Also, the dancing in the film was choreographed by the award winning Filipino dance couple Keone and Mari Madrid, and their expertise truly comes through in the film. Just watching the dance movements, there’s never a moment that feels unrealistic or overly stylized. You can imagine Keone and Mari going through these exact movements, and that’s likely how the choreography was animated.