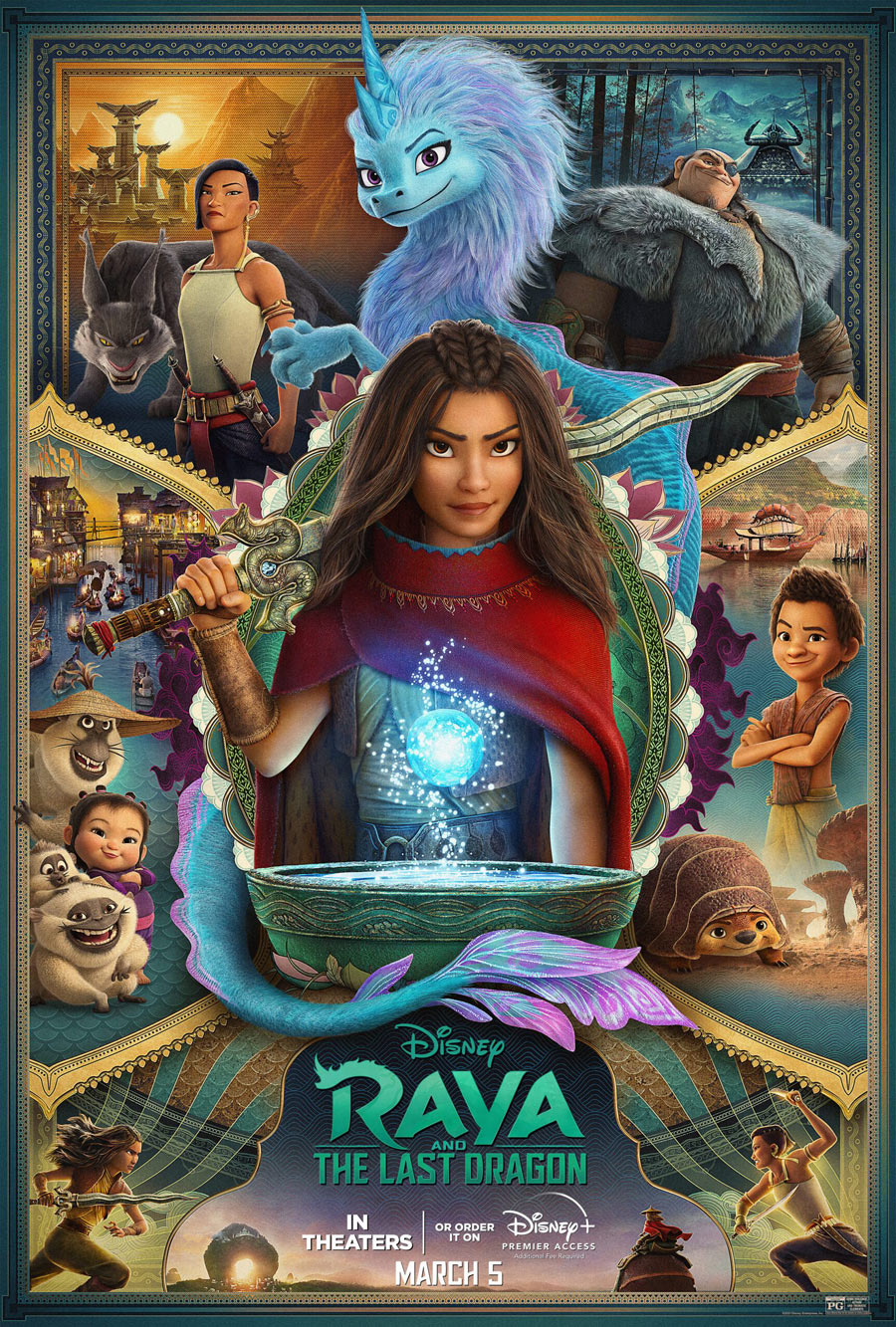 Raya and the Last Dragon, Disney Animation’s latest visual masterpiece, is the first big studio film inspired by, and infused with, Southeast Asian cultures. Starring Kelly Marie Tran as Raya, and featuring one of the most incredible casts of Asian actors ever, the film highlights Southeast Asian themes, aesthetics and culture to tell a universal story of trust and community.

Raya and the Last Dragon releases exclusively on Disney+ via premier access this Friday, March 5th and it’s not to be missed! Light spoilers below!

The story takes place in the fictional world of Kumandra, where the people are divided into five lands inspired by a dragon’s body parts – Heart, Fang, Tail, Talon and Spine. It wasn’t always a divided land, as when dragons roamed the world, the people were united and prosperous.

However, these formless monsters called the Druun came, turning people into stone and destroying the land. The dragons combined all of their magical energy to repel the Druun, but at the cost of their own lives.

With the dragons gone, the people of Kumandra are divided, and survive with the last remaining dragon magic concentrated in one Dragon Gem, that keeps the Druun at bay.

Chief Benja (Daniel Dae Kim) is the chief of the Heart and guardian of the Dragon Gem. He trains his daughter Raya (Kelly Marie Tran), to be a warrior who can protect the gem, but also to be a unifying leader. Despite Benja’s efforts to unify all the lands, the other groups conspire to steal the Dragon Gem, resulting in the Gem being shattered into pieces. With the Gem broken, Kumandra is further fractured.

Years later, Raya, now grown into a young woman, is determined to find the rumored last dragon, Sisu (Awkwafina), in hopes of restoring Kumandra. When she finally finds Sisu, Raya realizes that they must recover each of the pieces of the Dragon Gem to return the dragon magic to Sisu and save the land.

Raya, Sisu, and trusty friend and steed, Tuk Tuk (Alan Tudyk), embark on their adventure to each of the Kumandran lands to recover the Gem pieces. Along the way, they meet unlikely allies like Boun (Izaac Wang), Little Noi (Thalia Tran), and Tong (Benedict Wong).

Meanwhile, the Fang, led by Chief Virana (Sandra Oh) and her daughter Namaari (Gemma Chan), is the only land that has prospered during these troubled times, and aren’t exactly thrilled about Raya’s plan. Namaari believes that she must stop Raya in order to protect her people, but will it come at the cost of all the other lands?

It’s worth taking a moment to visit Disney’s site about Kumandra, but it’s not necessary to understand the story or enjoy the film.

Raya and the Last Dragon is a Southeast Asian action-film that leans heavily into the themes of trust and community. At first I was a bit concerned that the themes would be covered in a cursory way with little actual nuance. Especially with something like “trust,” it’s not a topic that’s really easy to explore beyond the most superficial idea that it’s important to trust each other. What impressed me about Raya is that the story explicitly shows how difficult it is to really trust someone who isn’t already a friend or loved one, especially when they repeatedly prove unworthy of that trust. Yet the film shows how that kind of trust is the only way for a fractured community to heal. That’s not the kind of depth and nuance you expect from a “kid’s film.”

Namaari turns out to be less a villain than a conflicted rival. From their first meeting as young girls, Raya extends a considerable amount of trust to Namaari, only to be betrayed. Through those moments, it’s the dragon Sisu who displays an unrelenting trust in humanity and repeatedly insists that Raya must keep trying.

It was so hard not to hate Namaari after her repeated transgressions. However, each time, it was clear that Namaari believed that she was acting in the best interests of her people. The internal and direct conflict between Raya and Namaari give the film an emotional weight that carries the story throughout.

Southeast Asian representation is infused throughout the film, and is particularly evident in the depiction of food and the film’s fight scenes. Food is such a unifying element, and early on, as Chief Benja is teaching Raya about the importance of all the lands working together, he uses the example of a large pot of stew with ingredients from all the lands. Similarly, throughout the film, meals together are a constant bonding agent between Raya and her friends.

The fight scenes are exquisite and authentic, thanks in large part to co-writer Qui Nguyen who also acted as one of the fight consultants. Raya uses weapons modeled from Filipino martial arts styles Kali and Arnis, including escrima sticks. For much of the film, Raya wields a distinctive sword, which was inspired by the kris or keris, a sword famous in countries like Indonesia, Thailand, the Philippines and Malaysia. Raya’s fighting style was based on Pencak Silat from Malaysia and Indonesia. For Namaari, her fighting style is distinctively inspired by Muay Thai kickboxing and Krabi Krabong configurations from Thailand. That level of authenticity to Southeast Asian fighting can only be delivered by someone like Nguyen, who grew up immersed in the culture and with a genuine love of martial arts.

Raya is an almost impossibly beautiful film. From the lush landscapes, to the various forms of water (which is almost a character in and of itself), and the intricate designs, Raya feels like a 3D movie. It’s yet another resounding success for the Disney visual development team, which essentially created five distinct worlds within the film.

In particular, the night market in the trading port of Talon is stunning, with colors and lighting that really make the whole scene come to life. If you’ve ever had the opportunity to visit any Asian night market, you know that its essence was perfectly translated into this film. I wanted to walk through the vendors, and shop and eat there.

Finally, it can’t go unnoticed that this film highlights various strong, intelligent, and very capable women. Kelly Marie Tran’s Raya is a true warrior who is also warm and loving to her family and friends. She has a genuine compassion and love for others. Gemma Chan’s Namaari, Akwafina’s Sisu and even Sandra Oh’s Virana are all memorable characters in their own right, giving the film a diverse group of interesting women characters not often seen in film, animated or otherwise.

Notably lacking from Raya and the Last Dragon are the songs during the film. Disney animated films are known as much for their memorable soundtracks as they are for anything else, and I’m disappointed that Raya will not get that benefit. The music helps children in particular connect with the stories and allows the stories to stay with them long after each viewing. Frozen’s “Let it Go” is probably the best example of a song that as memorable as the movie itself, but others like Moana enjoyed similarly beloved soundtracks.

Raya has an original song by Jhené Aiko titled “Lead the Way” which plays during the end credits, but that doesn’t have the same impact as in-movie songs. As with Moana, having culturally authentic music sung by the characters would have been another wonderful way to celebrate Southeast Asian culture, and also help make the film endure beyond each viewing.

There’s always the goal of having more established and well known names involved in a project like this to ensure that more casual audiences will be drawn to the film. Everybody, especially Disney, wants Raya and the Last Dragon to be a huge success. Part of the drive to make that happen is having actors attached who will be known by those beyond Asian-American audiences. However, if Disney, which is singularly the most powerful entertainment brand in the world, won’t take a “risk” on lesser known voices, then who will?

As much as I would have liked to see more Southeast Asian voices included in the brilliant cast, I can’t overlook the incredible contributions by Southeast Asian creatives. First and foremost, the two co-writers, Adele Lim and Qui Nguyen, brought a genuine passion and love to this project that can’t be replicated. Any time Lim, who grew up in Malaysia, talks about the film I feel like she borders on tears of love. Similarly, Nguyen, who is Vietnamese-American, can barely contain his excitement when describing the martial arts of the film.

Beyond Lim and Nguyen, the main cast includes Izaac Wang, whose mother is from Laos, and Thalia Tran, who is also Vietnamese-American. It’s wonderful to see two young Southeast Asian actors have the opportunity to be a part of a groundbreaking film like this.

In this article:Disney, Raya, Raya and the Last Dragon, RayaandtheLastDragon, Review, Top