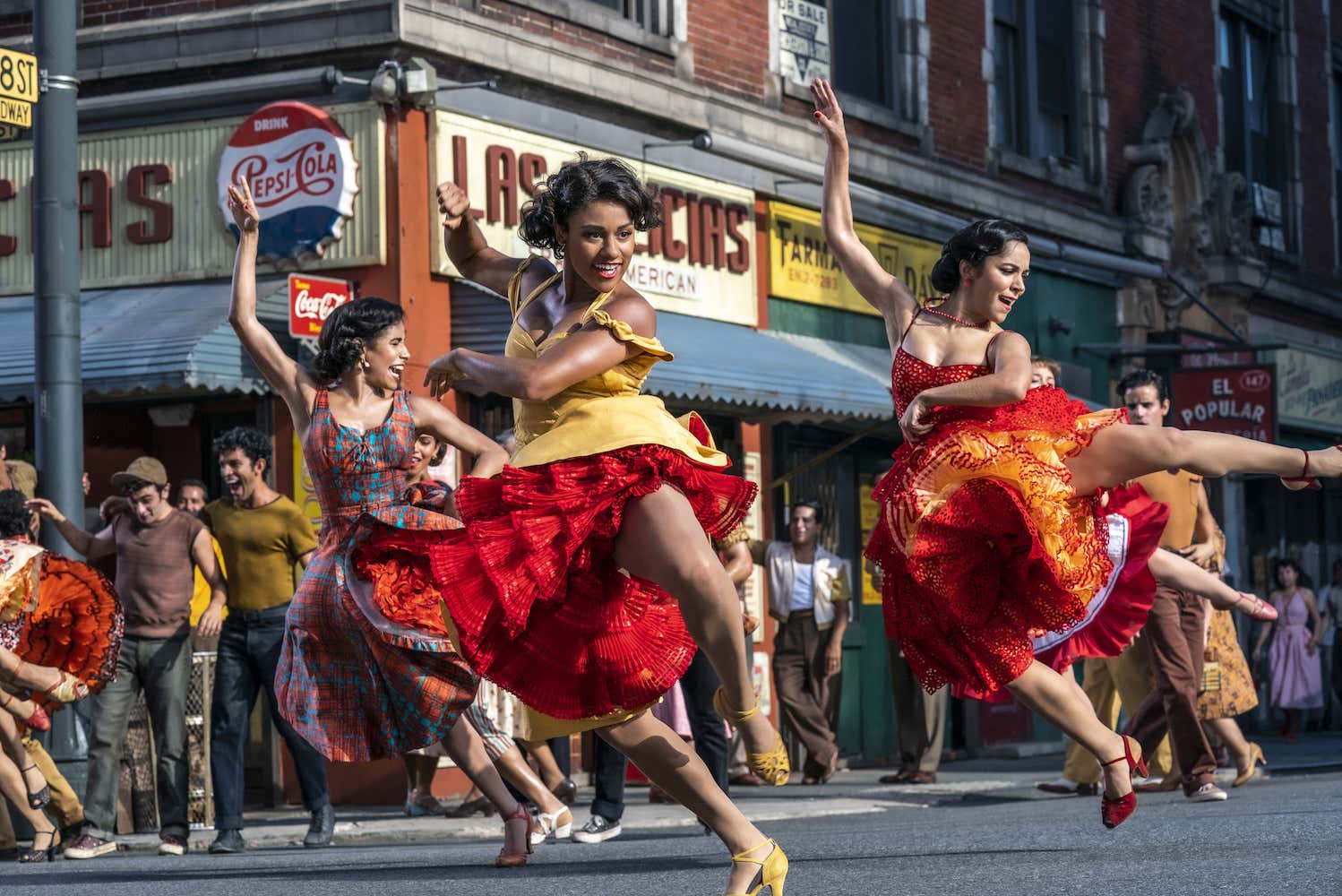 In order to properly examine Steven Spielberg’s imagining of West Side Story, you can’t look at it like a remake of a movie of an adaptation of a stage play. That would be both too easy and unfair. Instead, you’ve got to start from scratch (still taking Shakespeare’s influence into account, of course). Which begs the question, why would the mind who brought us some of the greatest fantasies of the 21st century make a musical about gangs and romance? But, as the camera pans over the destroyed lower New York projects and we’re introduced to most of The Jets (New York’s young, whites-only street gang), as well as their reluctant father figure, NYPD Lieutenant Schrank, we immediately realize this take is going to be both an adventure and a human drama.

Spielberg is back in his element. If you’re unfamiliar with the plot of West Side Story, it centers around two rival gangs—one white (The Jets), the other Puerto Rican (The Sharks)—in the 1950s. Retired Jets gang-banger, Tony (Ansel Elgort), falls in love with María (Rachel Zegler), the Puerto Rican sister of rival gang-leader Bernardo (David Alvarez), and a forbidden romance ensues. Meanwhile, the city (and both their friends’ lives) falls apart due to the violence at the center of it all.

Steven Spielberg is one of the last directors whose films can be considered an event—they’re infrequent and they’re larger than life each time. He’s of the “old guard” and he doesn’t like making films; he loves it. Everything from the finely tuned coloration and camera angles to Justin Peck’s sweeping and meticulous choreography was inspected and selected with care and purpose. This version of the film knows what it is and embraces all of the nods to cinema of the past. Even down to David Newman’s operatic score, the film is a love letter to Old Hollywood musicals.

That brings us straight to the casting. For a story like this to work, chemistry is the single most important feature this musical cast and crew could have, and it can’t be one-sided. They played it smart with giving us a bevy of fresh faces, young talent and some established veterans (can you say “Rita Moreno?”). Fortunately, West Side Story’s ensemble hits the jackpot; there’s a rhythm—and a humor—to the interactions between María, Anita (Ariana DeBose) and Bernardo as they argue and bustle in the kitchen, dance in the wide city streets and even mourn their forbidden and lost loves; there’s music even in the minute dialogue between Tony, Riff (Mike Faist) and the rest of the Jets as they banter, dance and fight their way to the finish line. Every character, from beat cop Officer Krupke (Brian d’Arcy James) to the background dancers at the prom (which include superstar dancer Maddie Ziegler), has their own world, their own life and is lovable in an equally unique way.

Scale is something Steven Spielberg and the design team understand. When you can make the basement beneath the drugstore feel like both a shelter and a cavern worthy of Indiana Jones-style exploration, there’s a show-don’t-tell kind of mastery at work. The set-pieces are authentic to their locations and their era alike, and the clothes and fabrics have the fit and finish that make this world feel lived in and as if we’re right there with them. No detail was spared in getting the message across. Musicals aren’t everyone’s bread and butter, but this is a hard one not to love—the choreography is acrobatic at times but is always blended in seamlessly with the walk-and-talk so that it never feels like it’s leading up to a song.

And speaking of messages, the themes from when this tale was originally penned (even back to The Bard, if you will), are still as relevant today as they were then. Anybodys (Iris Menas) is the borough’s misunderstood and often-ridiculed gender-fluid character who struggles to earn the respect of the exclusively white, straight and male Jets to the very end. Brown women’s bodies are equally as desired as they are abused, and police bias and various privileges come into play on a daily basis against the West Side Puerto Ricans. West Side Story wants us to give peace a chance—but wants us to understand that love doesn’t always win in the end.

It’s hard to critique this movie. It’s a classic story told by a master director featuring gorgeous visuals, great performances and, of course, music by the genius Leonard Bernstein. While this particular batch of songs aren’t my personal favorites from a live musical (that might go to “My Fair Lady”), they’re established standards. I guess the question becomes: Did we need a West Side Story in 2021? I couldn’t help but wonder as it played out if they couldn’t have modernized the whole thing (a la 1996’s Romeo + Juliet). The antiquated aesthetics (and some attitudes) are far removed from the minds of today’s audiences, but in a world of smartphones and “progressive” sentiments, the story’s nature can be both its weakness and strength. In the same sense—while we didn’t need this movie—when it’s made to this caliber of skill, craft, mastery and execution, it’s a privilege to have it. Spielberg and his team are firing on all cylinders, and it’s a treat to watch.