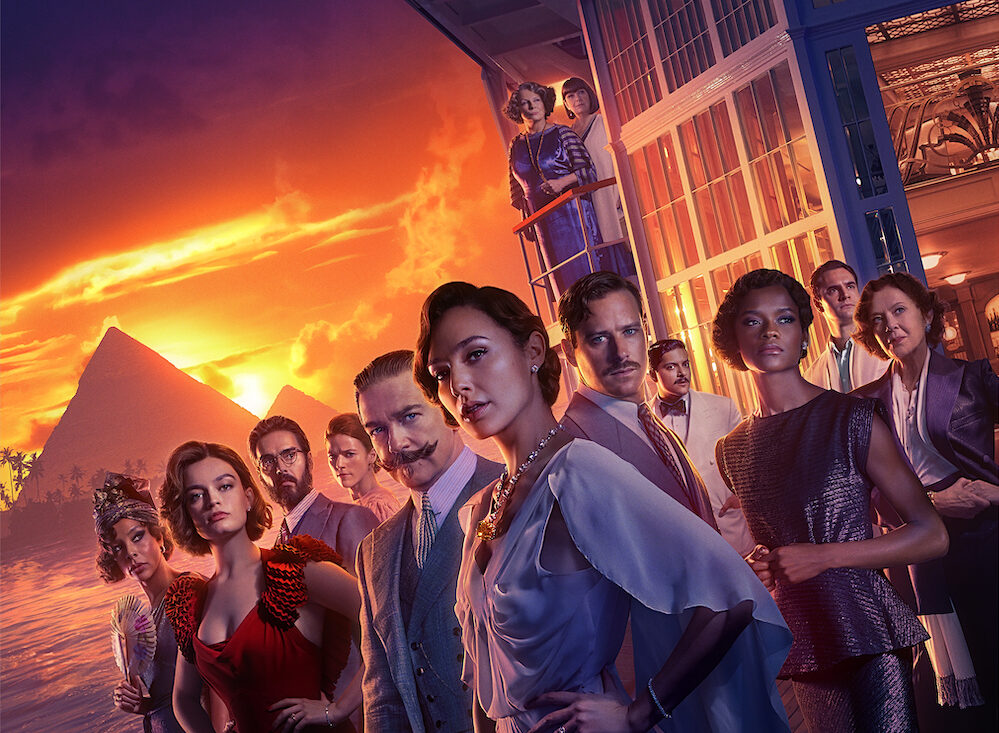 Murder mysteries are a tried and true genre, and by now we know to suspect everyone from the butler to the creepy neighbor to the former flame. 20th Century Studios’ Death on the Nile doesn’t try to upend any of those tropes. Instead, it plays to its strength by delivering a more-or-less well-rounded “Whodunnit?” featuring some memorable performances, lots of well-staged scenes and a classic plot against the backdrop of a bygone time.

Death on the Nile premieres in theaters Friday, February 11th!

Belgian sleuth Hercule Poirot’s Egyptian vacation aboard a glamorous river steamer turns into a terrifying search for a murderer when a picture-perfect couple’s idyllic honeymoon is tragically cut short. Set against an epic landscape of sweeping desert vistas and the majestic Giza pyramids, this dramatic tale of love gone wrong features a cosmopolitan group of impeccably dressed travelers and enough wicked twists and turns to leave audiences guessing until the final, shocking denouement.

Filmed with 65mm Panavision cameras in late 2019, “Death on the Nile” transports audiences to the 1930s, recreating many of the locations that served as inspiration for Christie’s glamorous, high society thriller.

REVIEW – Death on the Nile Plays the Hits but Lacks Depth

The sequel to 2017’s Murder on the Orient Express brings the great detective Hercule Poirot (played very passionately by director Kenneth Branagh) to a cruise on Egypt’s great lake, where he must solve a shocking murder before he and his esteemed passengers return to port and the unknown killer escapes. He’s joined once again by Bouc (Tom Bateman) and a bevy of new faces, all who claim innocence but have an exhaustive list of motives for committing the crime.

Right away, the movie gets off to a stunning start (as does the entire first act). We’re taken through the depths of Poirot’s vivid and terrifying memories, introduced to some key players and treated to a visual feast of choreography, roaring music and emotion. Branagh and his team crafted this film with intention and the details are never lost, from the Old Hollywood style lighting to the subtle film grain that becomes especially apparent once the films shifts to color from the monochrome opening sequence.

It doesn’t slouch on the casting either: Hercule Poirot is surrounded by stars (literally and figuratively) as he rubs elbows with Gal Gadot’s superstar Linnet Ridgeway-Doyle, Sophie Okonedo’s rising blues crooner Salome Otterbourne and a host of others (including Russell Brand, who seems to have phoned in his performance this time around). But great casting alone does not a great film make.

Death on the Nile is a competent murder mystery, but the second act reveals the thin plot; as soon as Poirot gets some alone time with his passengers, all becomes clear in the very first run so there’s nothing for him (or us viewers) to revisit. The characters have one-track minds and (well-played as they are) one dimensional personalities. All which brings us to a rushed finale. Somewhere between using his years of deductive reasoning and having a seasick gut reaction, Poirot has an epiphany (or fever dream) and unlocks several ongoing cases at once. A cinematic, but awfully convenient turn of events.

But that shouldn’t stop viewers from enjoying this movie—it’s a lot of fun. If you pay close enough attention, there aren’t really many surprises, but familiarity sometimes breeds fondness. Death on the Nile plays to type. And sometimes that’s okay.