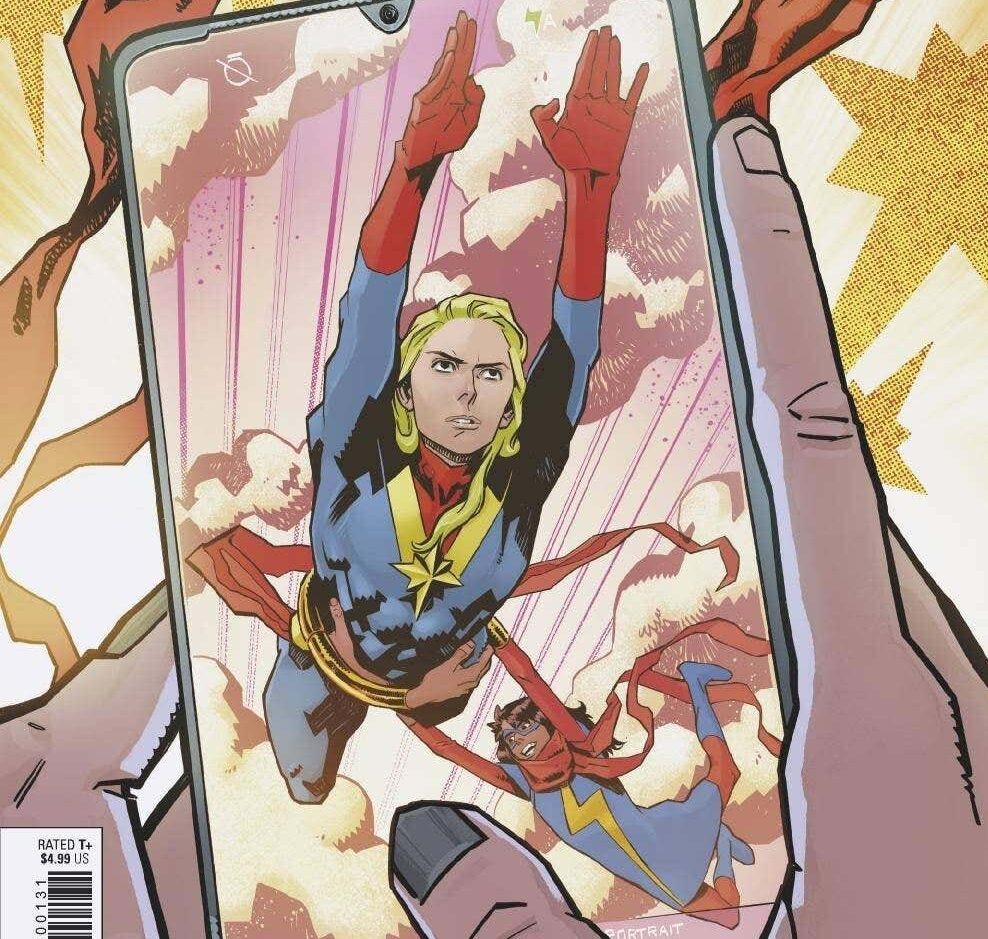 Marvels Snapshots are back! If you haven’t read any of these comics, they focus on bystanders who are impacted by a superhero’s action. In this Captain Marvel issue, our protagonist is Jenni Saito, a 14 year-old who lives with her parents in Long Island, NY.

Jenni has been suspended from school once again! This seems to be a semi-regular occurrence by the way she and her parents react to the news. This time Jenni gets in trouble for protesting about Trans kids, and how they shouldn’t have bathrooms restrictions. The previous time, she got in trouble for getting into an argument with a teacher regarding reparations. She has strong opinions and doesn’t want to be like everyone else.

Writer: Mark Waid
Penciler: Colleen Doran, Claire Roe
A team of heroes fights a stirring battle for the safety of the planet. A young woman struggles with desperation and despair, trying to cope in the modern world. But that’s only the beginning. Superstar creators MARK WAID (Kingdom Come, FANTASTIC FOUR) and COLLEEN DORAN (SPIDER-MAN, A Distant Soil) tell a tale of inspiration within inspiration, as we see how the world’s marvels have inspired others – and how they’ve been inspired themselves. Featuring Captain Marvel, Ms. Marvel and a few surprises.

As all the Snapshot stories go, Jenni comes face to face with Ms. Marvel, Thor, Iron Man, and Captain Marvel. Jenni has such spunk that, as the battle ends, she gets closer to the action. She gets to take a selfie with Ms. Marvel and they have a chance to sit down and talk. Jenni thinks of herself as a “nobody.” Ms. Marvel understands the feeling, and as Kamala shares her story, they realize how much they have in common. Both teenagers were greatly influenced by Carol Danvers, Captain Marvel.

At this point Captain Marvel joins Jenni. Jenni doesn’t believe that Captain Marvel can understand how she feels. I love how Carol responds, “Do you think I was born an adult?” she asks. We get to see Carol’s childhood through her eyes, how controlling her father was, and how women were to be a certain set way. Carol joined the Air Force as soon as she was old enough to get out of that environment with her dad. Jenni’s adventures with Captain Marvel and Ms. Marvel ends pretty soon after that.

Jenni’s meeting with both Kamala and Carol has given her new life! Her spirit was so dim when we met her at the beginning of the issue, being berated by her parents, and she was close to conforming. By the end of the issue, Jenni is ready to keep standing for what she believes is right and sets her alarm to go to the Mutants’ Rights Protest happening the next morning!

I was so curious about these Snapshot stories that I read all of the issues that were available on Marvel Unlimited! They are all so different but this story is one of my favorites. As I have been reading about young heroes in the Marvel universe, Jenni falls right in line with them. I found myself hoping that she has a wonderful life going forward, and that she will keep standing up for that she believes is right! Perhaps we will see more of Jenni’s stories one day!

Alex Ross’ cover grabs you right away, and the story doesn’t disappoint!