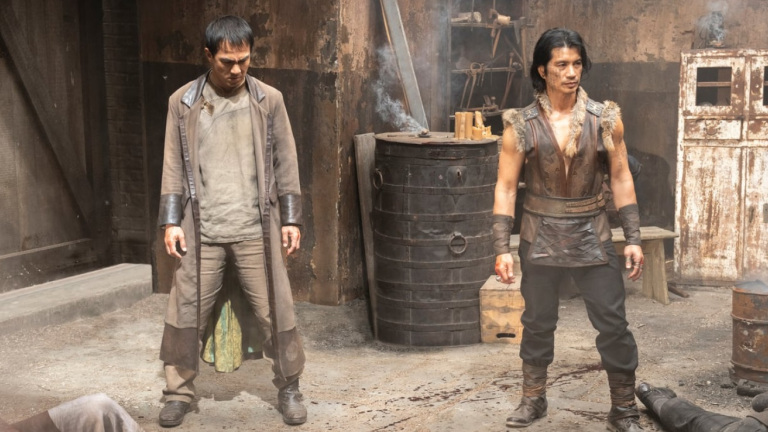 Let’s break this down by all the major parties so it’s easier to follow along instead of simply describing the episode in order. My recap is not in the chronological order of the episode and instead will separate out the stories of each of the major factions.

First, Ah Sahm and Young Jun are intent on finding another source for opium so that they can counter the lower prices that Mai Ling and the Long Zii are selling at. For Young Jun, it’s about rebelling from his father, as well as wanting to prove that he can be a leader. Ah Sahm’s motivations are less clear, but it seems he has his own sights set on leadership and sees this as a start. Young Jun even questions why Ah Sahm is so determined to do this, and asks if there are any ulterior motives. Ah Sahm claims it’s about retribution for losing his fight against Li Yong (in season 1). It’s almost sad to see Ah Sahm mislead Young Jun after the bond they had built.

Ah Sahm takes Young Jun to see Vega, who in turn introduces the dynamic duo to Happy Jack, one of the very few Black characters on the show. Happy Jack has access to opium supplies, and after a bit of a back and forth, Jack agrees to provide and store the opium for the right fee.

Later Penny Blake invites Ah Sahm to her factory and asks for his help in protecting their workers from Leary’s men. Ah Sahm wants no part of it and leaves. However, when Ah Sahm and Young Jun go back to Happy Jack to pick up the first shipment of drugs, they find out that Jack has altered the deal and refuses to store the opium. A rumble ensues with Young Jun stabbing everyone with his trademark pair of blades, but in the end Jack pulls a gun to Young Jun’s head and our “heroes” have no choice but to take the drugs and find storage away from Father Jun’s eyes.

Ah Sahm has the bright idea of going back to Penny Blake, agreeing to provide Hop Wei muscle to protect her factory, and unbeknownst to her, use her facilities to store the drugs. This was some impressively underhanded maneuvering by Ah Sahm. It’s nice that we’re getting to see the strategic side of his character in addition to his physical skills.

Next let’s check in with the Long Zii, which finds a member of one of the smaller Tongs selling some drugs, which they’re not allowed to do because only the Hop Wei and Long Zii have the authority to do so. The Long Zii rough him up and take him to Mai Ling, who wants to send a message. Li Yong intervenes, saying that he knows the leader of this smaller Tong, and requests permission to peacefully talk some sense into them. Mai Ling agrees but tells him to take Zing and the Fung Hai with him as a show of force.

Li Yong and the Fung Hai confront the other Tong and Li Yong convinces their leader to promise that they won’t sell drugs. Li Yong is satisfied, but Zing escalates the discussion until a fight breaks out and the Fung Hai kill everyone. Li Yong is livid at Zing and promises consequences once he reports to Mai Ling. Zing asks Li Yong to consider why she wanted the Fung Hai brought along to begin with. This shakes Li Yong.

In the meantime, Mai Ling meets secretly again with Deputy Mayor Buckley, paying him more than they agreed. She mistakenly assumes that Buckley will be pleased that “business is good,” but fails to realize that Buckley cares only for his ultimate goal of chaos in Chinatown resulting in passage of the Chinese Exclusion Act. He warns Mai Ling not to think that they are partners. This exchange prompts Mai Ling to later seek out a man named Mr. Nichols to provide “insurance” against Buckley. It’s not clear what form that insurance will take place or what this Mr. Nichols specializes in, but it’s good to see Mai Ling cover her bases. Buckley is the worst.

Big Bill O’Hara and Lee are next. Bill is still doing the bidding of the Fung Hai, but making good money in the process. In his other life as a cop, Bill and Lee are still working on the mysterious Chinatown murders. Lee makes the connection that all the murders are related to Chinese revenge except for the two businessmen (we know Ah Toy killed them last season). They decide to pay a visit to Ah Toy’s partner, Leonard Patterson, who is the last known person to complete a deal with the dead businessmen. The meeting doesn’t last long and both Bill and Lee are convinced that Patterson is hiding something. Unfortunately, both Lee and Bill can barely focus, as they’re battling their own demons.

Lee, who seems to be fighting both health issues and alcohol abuse, drinks too much to help him sleep and ends up getting mugged by some thugs at a bar and left in an alley. Lee is a mess and I’m not too clear on how he’s descended into this state so quickly.

Finally some quick hits from Chao, Ah Toy and Mayor Blake. Chao visits his mistress and their child. Sadly Chao refuses to let the child acknowledge that he’s her father. “No papa, just friend” he tells her. Ah Toy is visited by a wealthy woman named Miss Davenport, who seems to travel to brothels and try to save the prostitutes. Ah Toy sarcastically welcomes Davenport, saying that all her women work by choice.

For Mayor Blake’s part, the bumbling mayor takes part in an anti-Chinese rally organized by Buckley and comes out looking like the fool he is. It’s shocking that the Mayor can’t seem to do anything about the constant undermining by his Deputy Mayor and his wife. All he really does at this point is stomp around and rant about his situation. Nobody cares to listen.

The episode ends with a montage of all the characters coming to terms with the fallout from the events of the episode: 1) With the factory as her own source of income, Penny Blake can more freely ignore her husband at home, 2) Li Yong struggles with his growing uneasiness with how Mai Ling is running things and the break in their trust, 3) Lee continues to struggle with substance abuse while Bill attempts to pretend all is well with his family, and 4) the Hop Wei set up opium storage in Penny Blake’s factory.

Character Development – In our interview, Executive Producer Jonathan Tropper promised more character development in season 2, and this episode really laid the foundation of that development. In particular, Ah Sahm and Li Yong had several strong emotional moments in this episode. Ah Sahm continues to gain confidence and is starting to develop his own schemes independent of Young Jun. As for Li Yong, we get to see that he genuinely cares for his fellow Chinese, and isn’t just a brute who does Mai Ling’s bidding. He’s disturbed at the savage and senseless violence by the Fung Hai and is conflicted between his support for Mai Ling and his disapproval of her methods. It’s good to see the two characters who were central to the biggest fight in season 1 develop from a mental and emotional perspective.

Light on Action – This episode was a bit light on the action. There were essentially two action scenes, with Young Jun and Ah Sahm fighting Happy Jack’s grunts and Li Yong, Zing and the Fung Hai killing the smaller Tong. Both were visually stunning and would probably suffice as the fight of the season for other episodes. However, neither scene had much emotional weight and ultimately won’t be very memorable. We do see the foundation for an inevitable duel between Joe Taslim’s Li Yong and Dustin Nguyen’s Zing, and that fight is sure to produce fireworks.

The Davenport storyline makes me cringe a bit but I also recognize its potential to address interesting issues. There’s a great exchange between Chao and Davenport that goes like this:

Chao: “Miss Davenport, here to save the world again?”

Davenport: “No, just your people, since you’re too busy exploiting them.”

Davenport: “Which? Save or exploit?”

This brief exchange is so meaty and reflects Warrior’s eagerness to address genuine social issues while telling a martial arts epic. Davenport is a literal white savior, and yet her existence forces characters like Ah Toy and Chao to consider the moral quandary that comes with struggling to survive at the potential expense of their own people. Of course, if those in power weren’t actively seeking to marginalize and exclude the Chinese immigrants, then they wouldn’t be forced into the moral dilemma to begin with. Davenport, instead of using her wealth and influence to fight against racist policies like the Chinese Exclusion Act, chooses to vilify the Chinese.