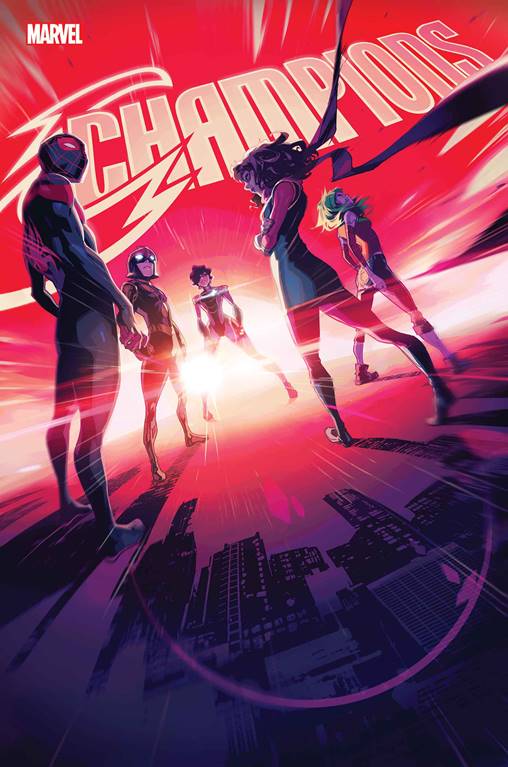 One of the best books in comics right now, Champions, is getting a brand new creative team this April when Danny Lore and Luciano Vecchio are taking over for Eve L. Ewing, Simon Di Meo and Bob Quinn. Champions, which features younger superheroes like Ms. Marvel, Nova, Ironheart and Miles Morales, launched last year and has consistently been a great read. The current “Outlawed” storyline that Ewing has been writing deftly juggles teen angst, superhero action and social justice issues.

Lore and Vecchio seems like an excellent team to take the reins of the book and I’m definitely looking forward to their first arc. Check out Vecchio’s cover for Champions #6 and additional details below!

THE CHAMPIONS GO UNDERCOVER TO CHANGE THE WORLD THIS APRIL

“I’m sad to say farewell to the Champs right now but so excited that some amazing creators are taking the helm,” Ewing said. “Especially Luciano who I had the great joy of working with on Ironheart.“

Launched last year, CHAMPIONS has ushered in a redefining era for some of Marvel’s most popular heroes such as Ms. Marvel, Nova, and Miles Morales. Now, the Marvel Universe will need the Champions more than ever as an extraordinary new threat emerges that only the Champions can take down in the new “Killer App” story arc.

The Champions tried fighting fair. Now it’s time to fight dirty. A sinister corporation is cheating the system to try to keep Kamala’s Law on the books, so the Champions infiltrate the company to take it down from the inside. But the company’s wildly popular self-help app is already turning public perception against teen super heroes. Can the Champions wage war on a trend? And how dirty will their hands get before it’s over?

“I think it’s very easy today for young people to feel either helpless or overwhelmed with the weight of the world and its ills on their shoulders. With rhetoric constantly showing up about how the youth will save the world, but not necessarily with the support system to assist, it’s important that Champions exists as a story in which they DO have the power,” Lore explained. “Where even if the teens only have each other, they can change the world, the rest of us grown folk be damned.”

Luciano Vecchio, known for his work on books like Ironheart and the upcoming King in Black: Wiccan and Hulkling, continues to bring Marvel’s young heroes to life with his vibrant and eye-catching style.

“Personally this is the perfect follow up to my run as artist on Ironheart, which has been super significant to me, and I’m so excited to reconnect with Riri and also get to draw Ms. Marvel, Miles and the rest of the kids and get my visual brand on them individually and as a cohesive team,” Vecchio said. “Young legacy heroes are my favorite category in the superhero genre because they redefine and update the archetypes we love in a constantly evolving world that challenges the kind of stories we tell. Champions in particular has been such a special read in this sense from its start and I’m honored to be part of it.”