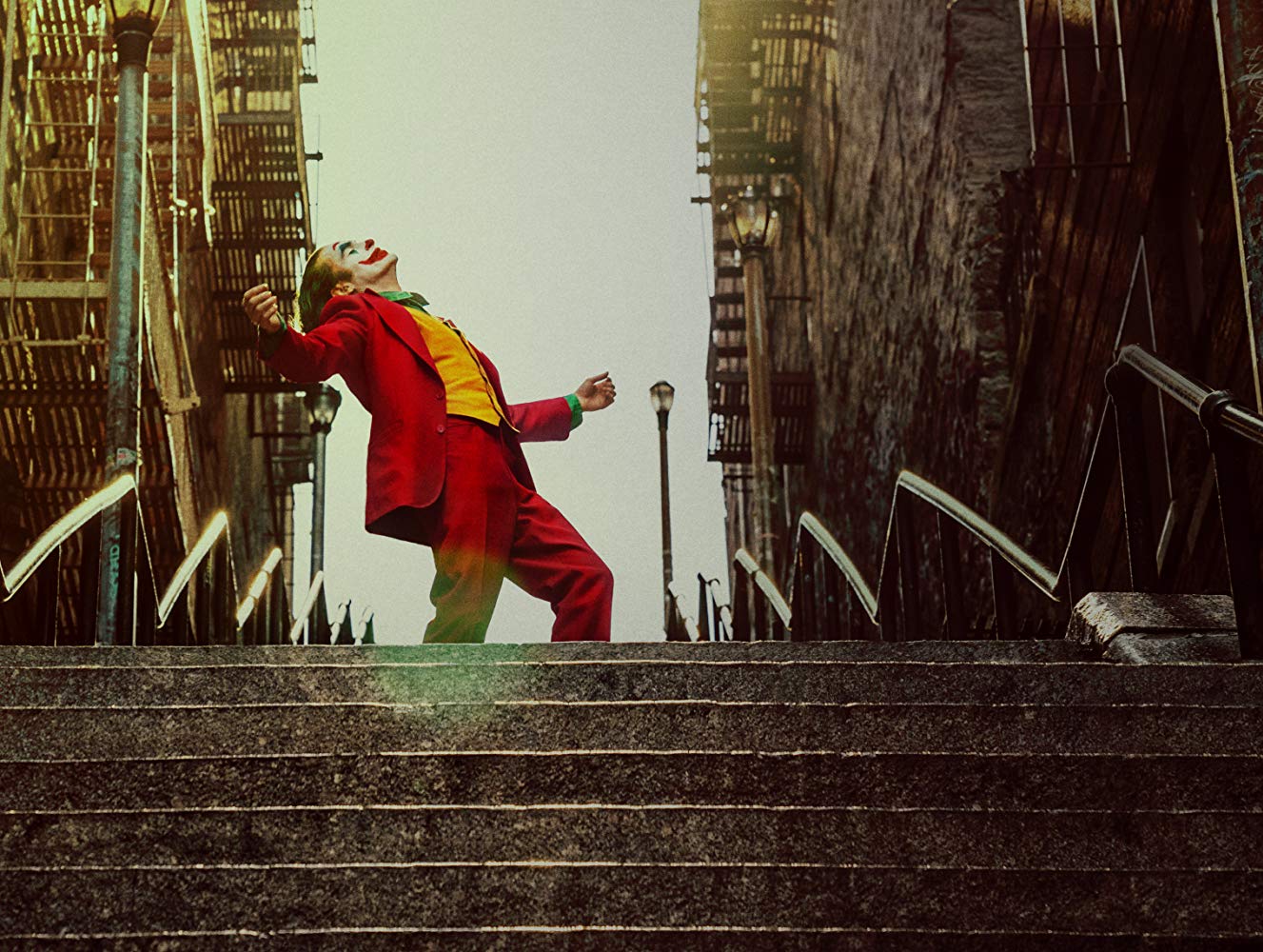 Joker is finally here! One of the first things I personally look for whenever a major pop culture film premieres are reviews from critics of color and other diverse backgrounds. They’re not always easy to find unless a studio is specifically seeking to target a certain group. As such, I’m going to try to aggregate various reviews from critics of color and diverse backgrounds for some tentpole type films. Given the conversation around Joker, I think it’s appropriate that this is my first project of this kind. Hopefully there will be many more to come and readers will find this to be a useful resource.

First some background. Even before its premiere at the Toronto International Film Festival, the conversation around Joker, directed by Todd Phillips and starring Joaquin Phoenix, has been intense and divisive. I can’t recall another film in recent memory that has been the source of so much debate before its release. And I’m not talking about the normal comic fan debates about authenticity to the source material or the appropriateness of the casting. The discussions around Joker have been at a level beyond any comic book store argument. Indeed, just the online chatter alone have prompted the New York Police Department to prepare increased police presence during opening weekend.

Further, the families of the victims in Aurora, CO, where the 2012 mass shooting occurred during a showing of Christopher Nolan’s The Dark Knight Rises, sent a letter to Warner Bros., asking the company to use its platform and this unique moment of hyper-visibility to stop making contributions to political candidates who support the NRA, to actively lobby for gun reform, and make contributions to groups that support survivors and aim to reduce gun violence. To be clear – the Aurora victim families did not try to keep Warner Bros. from releasing the film and did not seek to encourage a boycott. Instead, it seems clear that the hope of the families was to use this opportunity to increase gun awareness and promote genuine gun reform. Having said that, their local Aurora theater, now called Century Aurora and XD, does not seem to have plans to show Joker. This makes sense given the pain that the community must still be suffering from.

Below are reviews of Joker  from critics of color that I have seen thus far. I will continue to update this list for at least one week after the film premieres. Please feel free to contact me via the site or on Twitter if you would like me to add or remove your review from this list. Please note that I reserve the right to add reviews at my discretion. Of course I will honor any requests to remove your review.  Special thanks to The Cherry Picks which gathers a variety of reviews from female-identifying critics!

Finally – By including the following reviews, I am not making any assertions about the site or reviewer’s credibility or quality. I’m simply sharing what I’ve seen from critics that I have seen online.

Carla Renata, The Curvy Film Critic
“Phillips and Scott Silver’s original screenplay is a marvelous take of this fan favorite leaving nice rewarding reference points for fans. Shocking in its originality and intensity, Joker provides a fully immersed performance from Phoenix who creatively gives audiences an unsettling, no holds barred portrait of the villain we thought we knew.”

Joi Childs, MTR Network – 7/10
“Joaquin Phoenix’s performance is disturbingly captivating as Arthur, sucking you in from the moment he’s on-screen. Like in his prior roles, he isn’t afraid to immerse herself in this character: he physically transforms to become gaunt and it works to draw concern for Arthur’s mental state.”

Jazz Tancay, AwardsWatch
“Watch Joker as a commentary. Understand how society ignores someone just trying to make a living but doesn’t concern themselves with someone who has a mental illness. Watch it because Joaquin Phoenix delivers a mesmerizing performance and catapults into one of the best interpretations of Batman’s most famous archenemy and an equally Oscar-worthy performance. Watch it because Joker is truly a spectacle.”

Katie Smith-Wong, FlickFeast – 4/5
“Overall, Joker shows how a simple catalyst to start a revolution – in this case, a broken shell of a man. Its themes will polarise audiences but there is no denying Philips’ devastating reimagination of an iconic character. Along with Phoenix’s staggering performance, this is one Joker that can be serious.”

Chauncey K. Robinson, People’s World
“Joker is a film that goes beyond the usual comic book movie fanfare. There are references to Batman, Joker’s arch-enemy, that will serve as a treat to those who know the comic books, but is not alienating for those that do not. The violence is brutal and not for the faint of heart. This is not a happy film, and one can argue that it doesn’t have much optimism for humanity, but it does explore some concepts of the human condition that will have plenty of people talking long after the credits roll.”

Timothy Hall, The People’s Critic – B
“Joker is very well done and wildly entertaining. It may not be a smart as Phillips thinks it is, but it’s a really fun time in the theater. The violent atmosphere may turn people off (understandable), but those who can stomach it will be in for a treat.”

CJ, But Why Tho? – 7/10
“Ultimately, Joker is neither deserving of the controversy it’s stirred up or some of the praise it’s received. Phoenix’s performance is the highlight of what is ultimately a relatively tame film.”

Larry, LC Screen Talk
“While I struggle with the underlying messages about mental illness and mass violence, ultimately Joker is a strong film anchored by an amazing lead performance from Phoenix, amazingly haunting score and top level cinematography.”

Zaki Hasan, Zaki’s Corner – B
“Joker is raw, unsettling, and experimental, anchored by an absolutely mesmerizing central performance. While I didn’t find it transcendent, I did appreciate the many ways Phillips expands the scope of what to expect from a comic book film.”

Mike Manalo, Nerds of Color – A-
“That said, you’ll hear the terms “masterpiece” and “brilliant” being thrown around a lot for this film. All I can say is, believe them. This one is a game changer that will leave you shaking.”

Dorian Parks, Geeks of Color – 9/10
“It might be early to say, but I believe Warner Bros. and DC have another hit on their hands with Joker. Todd Phillips delivered a game changing comic book film, and I cannot wait to see it again.”

Karen Han, Polygon
“The problem with Joker isn’t whether Arthur is a hero or a villain; the problem is that film seems more concerned with proving its worth than saying anything meaningful. The film is beautifully shot and well-acted, and its most violent and shocking scenes landing with visceral impact. But Phillips’ flashes of style are all in service of a grimdark image rather than a message about the haves and have-nots, or the treatment of mental illness, or any of the other, real issues so easily within reach. It’s all show, and no substance.”

Trey Mangum, Shadow and Act
“Joker doesn’t have a plot. There isn’t a coherent sequence of events that the film presents. Instead, there’s a deus ex machina to try and make its violent conclusion make sense.”

Robert Daniels, 812FilmReviews – 2.5/4
“And while Joker contains multitudes: both an irresponsible use of disability and mental illness, and a capsule for our current culture, the art surrounding the filmmaking itself is inescapable. And so is the brilliance of Joaquin Phoenix.”

Rendy Jones, Rendy Reviews – 2/5 47%
“Similar to slamming mismatched jigsaw pieces together and not knowing how to make them fit, Todd Phillips’ Joker is a confused and muddled mess that irresponsibly crams in way too many underdeveloped themes in an immature manner, making for an egregiously incohesive narrative.”

Robert Daniels, Mediaversity (Note: Daniels wrote his own review, which is different in approach for Mediaversity, which reviews films from a specific perspective)
“While Phillips claims the Joker isn’t glorified, and tries to support that in ways like having Arthur downspiral from defending himself on a train to murdering an innocent social worker, he skirts closely to such elevations.”

John, About to Review
““Timely and poignant for all of the wrong reasons, while being over-performed and under-written”.”

In one of the most hilarious film promotional videos ever, Dwayne “The Rock” Johnson and Kevin Hart, stars of DC League of Super-Pets, accepted...