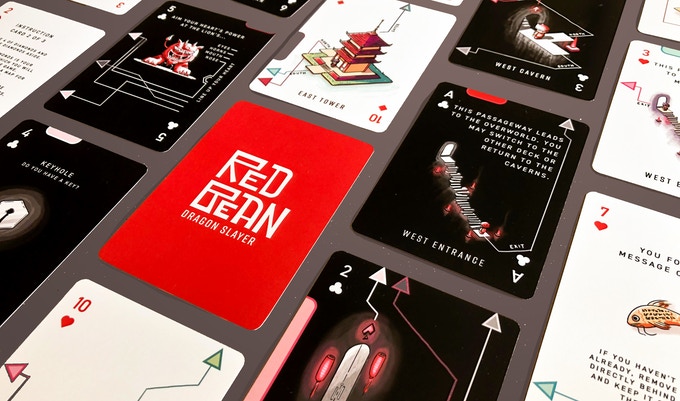 Having a famous and successful family member isn’t necessarily the best situation. For 16-year-old Kolbe Yang, son of acclaimed writer and MacArthur Genius grant recipient Gene Luen Yang (check out our previous two-part interview with Dad Yang if you haven’t already), it must be somewhat daunting to have such significant creative shoes to fill. Still, for some, that kind of inherent pressure can be channeled into inspiration. Pressure and diamonds and all that.

In addition to everything that comes with just being a 16-year-old kid right now, Yang apparently has the creative itch himself. Last year, he developed a multi-player competitive card game called Grumpy Wizards and launched it on Kickstarter. Unfortunately, that campaign fell short of its goal. Nobody would have faulted Yang if he dusted himself off and decided to pursue other passions beyond creating a card game. To his credit, he took that experience, created a completely different card game, and is back on Kickstarter with Red Bean: Dragon Slayer. Yang’s latest campaign launched yesterday and this new game has slick card designs, a novel game play system and the extra utility of being on a conventional poker deck. Oh and after one day it’s already been funded! I had the chance to chat with Yang about his new project, what inspired this game, which is completely different from his original idea, and what he learned from that disappointing experience.

Although the project has already been funded, Yang has added some stretch goals and already says he has additional goals planned. So if you’re able, head over to the Red Bean: Dragon Slayer Kickstarter page and support this project that’s not only a really cool game developed by a young Asian-American creator, but also symbolizes the kind of resilience and persistence that warrants admiration.

POC Culture: How did you come up with the idea for Red Bean: Dragon Slayer. What were your inspirations?

Kolbe Yang: My main inspiration was Jason Shiga’s book Meanwhile. I’ve read the book many times since I was little. This game has similar mechanics but on cards. I’m not too into video games (my parents never allowed us to have any) but some of the elements of the game are inspired by RPG games like Zelda. Red Bean is also a young avatar on an adventure in a fantasy world.

Q: What was your favorite part of the design and development of this game and what was the most challenging part?

KY: This project was fun to make in general. I’ve always loved to draw. Although drawing cards takes a lot of time, it was still enjoyable. I also liked designing the game mechanics and structure. It was definitely challenging to create a story that fit perfectly onto a 52 card poker deck, but it was equally rewarding after it was put together. Every project that I’ve done has some parts that I really don’t like. For this project, I did not enjoy all the tedious formatting in Photoshop for each card.

KY: Grumpy Wizards took a really long time to make and by the time I was done, I was really sick of the whole thing. I never really thought to myself, “Okay, I finished that. What’s next?” I kind of just stumbled into the idea for Red Bean. Initially, I just wanted to make a non-linear story (like Meanwhile, or Bandersnatch on Netflix). Since the Grumpy Wizards Kickstarter failed and I had a bunch of useless leftover cards, and because I’d never seen someone do it before, I decided to use cards as the medium.

Q: Grumpy Wizards looked like a really fun project and I’m sorry that it wasn’t funded. What did you learn from that experience that you are applying to Red Bean: Dragon Slayer?

KY: There are a number of things that I’m doing differently than before. From the Kickstarter side, the Grumpy Wizards goal was pretty high, so I decided to lower it for Red Bean. With Grumpy Wizards, I really struggled to find a good visual style for the game and I ended up redesigning the artwork several times. In Red Bean, I figured out the style I wanted pretty early on and that made the whole thing much simpler.

Q: Based on your two Kickstarter projects, it looks like you’re a big fan of card games. Where does that love come from and do you have a favorite game (any type)?

KY: In 2017, when I was in 8th grade, I became interested in designing a card game. One of my teachers at the time was into tabletop gaming and he introduced me and my friends to games like One Night Ultimate Werewolf. Since I liked to draw and I knew how to use the software, I thought that a card game would be the perfect project. I made prototypes for a bunch of games about ninjas, grocery shopping, and other random things that I forced my family to play (sometimes against their will). Eventually, I designed Grumpy Wizards and now Red Bean. One of my favorite games is One Night Ultimate Werewolf which is a Social Deduction game, kind of like Mafia. I’ve also enjoyed playing The Resistance, Dominion, and Exploding Kittens.

Q: What would you like people to know about your goals for Red Bean: Dragon Slayer?

KY: Most immediately, I want the Kickstarter to be successful. Beyond that, I hope people who play this game find it interesting, fun, or even a little confusing.

Q: What’s next for you after this project? Do you have other projects in mind that you hope to do?

KY: I’ve considered some other card game ideas using Red Bean’s mechanics with different settings, more cards, and even multiplayer. Sometimes I’m working on something else, or just walking around and think, “That would be a cool Kickstarter!”. Right now I’m trying to be focused on this project but I’m sure there will be something else in the future.

Thanks to Kolbe Yang for taking the time to chat with us. As one of the backers for his Kickstarter campaign, we’re greatly looking forward to playing Red Bean: Dragon Slayer and we’re excited to see what he comes up with next. We’ll be watching Yang’s career with great interest!

Hot off the success of DC Festival of Heroes: The Asian Superhero Celebration #1, which introduced Marcus Sun, the Monkey Prince, DC Comics is...

Shang-Chi is finally back with his first on-going series in almost 40 years! After a successful refresh of Shang-Chi last fall by the all...

Just under one month away from the highly anticipated release of the Shang-Chi on-going series from Gene Luen Yang, Dike Ruan and Triona Farrell,...