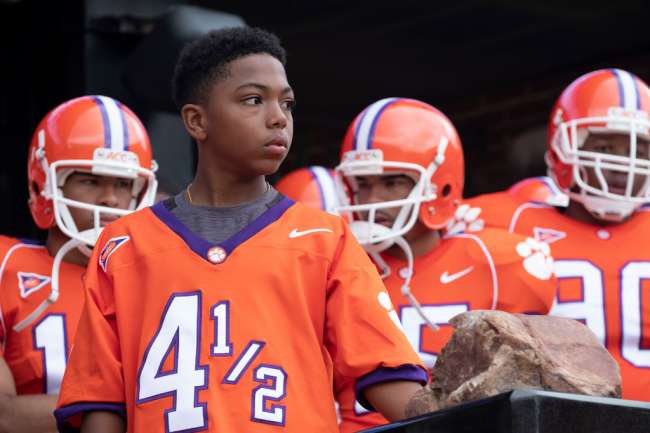 Inspiration is at the heart of Disney’s latest film Safety, based on the true life story of former Clemson student-athlete, Ray McElrathbey. The creators and cast for Safety were all touched in various ways from learning about McElrathbey’s story, and came together to create a film that is sure to inspire others. At the global press conference for the film, the cast talked about how impactful the script was for them and how important it was for them to be a part of this project.

As I noted in my review of the film, Safety is the kind of story we all need right now, and its uniqueness is reflected in the fact that the film’s subject, Ray McElrathbey, has embraced the project. Describing the experience of having a film about his life surreal, McElrathbey expressed appreciation that his story was being told. “I’m blessed and excited to have the opportunity to be here with all the people that are assembled to make this cast and crew and [for them] to be part of my life forevermore, in the future,” McElrathbey said.

For the two leads, Jay Reeves, who plays McElrathbey, and Thaddeus J. Mixson II, who plays McElrathbey’s little brother Fay, the story inspired them from the beginning. “This story was just so impactful to me that reading the description made me leave everything and go pursue it,” Reeves said, “I’m so grateful to be a part of this project. It’s amazing.” Mixson echoed similar emotions. He mentioned that while he wasn’t previously aware of the true life events, his research into the material led him to watch a moving Oprah Winfrey interview. “I actually almost cried from just watching it. Because you could just see the pain. And I know he went through a lot. So yeah, I just wanted to show that on screen,” Mixson said.

Although the story is inspired by true events, one interesting creative liberty taken was with the role of Kaycee, played by Corinne Foxx, who wasn’t based on a specific real-life person in Ray’s life. “I remember asking Ray, ‘Hey, you know, who is the real Kaycee?’ and he goes, ‘There was a lot of girls that are gonna think they’re Kaycee,'” Foxx joked. Laughing, McElrathbey made sure to clarify that he simply meant that there were many supportive people around him during that time. As with others in the cast, Foxx’s interest in the role came down to being inspired by Ray’s story. “I was really attracted to the role because I have two little sisters that are 12 and 13-years-old, and I could only imagine what I would do for them. I would do absolutely anything,” Foxx said.

I’m from a small town in the Midwest, all Black, economically deprived, where it takes a lot of energy to get escape velocity, to create opportunity for yourself. And Ray had it tougher than most. And he’s a guy who made a way out of no way, in a situation with failure was not an option. And I think, you know, that’s a really important message. And I knew it was especially important for the times we’re living in. Because right now we’ve got a country that’s really torn apart. And what Ray represents, he represents integrity, because he succeeded while maintaining a focus on education, a focus on excellence, which in his case was on the playing field, and most importantly, taking care of his family. And I think those are values that we all think is important, I don’t care who you are or where you’re from. So if we can come together focusing on those values, I think that starts to heal and rebuild our society.

Throughout the press conference, the enthusiasm and excitement that the cast and crew had for this project was clear. Ray and Fay’s story touched them, and in turn, it allowed them to tell a story that will hopefully touch many others. The respect and appreciation everyone involved had for McElrathbey and his journey was evident, and it was nice to see them be able to express that directly to him. Ray’s involvement with the development of Safety undoubtedly enhanced the cast’s performances.

The year 2020 will unfortunately be defined by an unprecedented period of hardship, and Mixson perfectly summarized the message of Safety, saying that he hopes those who watch the film will see the value of resilience during difficult times. “If you’re going through something like that right now, especially as a kid, just don’t give up and just keep going. Because, eventually there will be something that’ll be very good that will happen. So, just don’t give up,” Mixson said.

Safety is streaming today on Disney+!