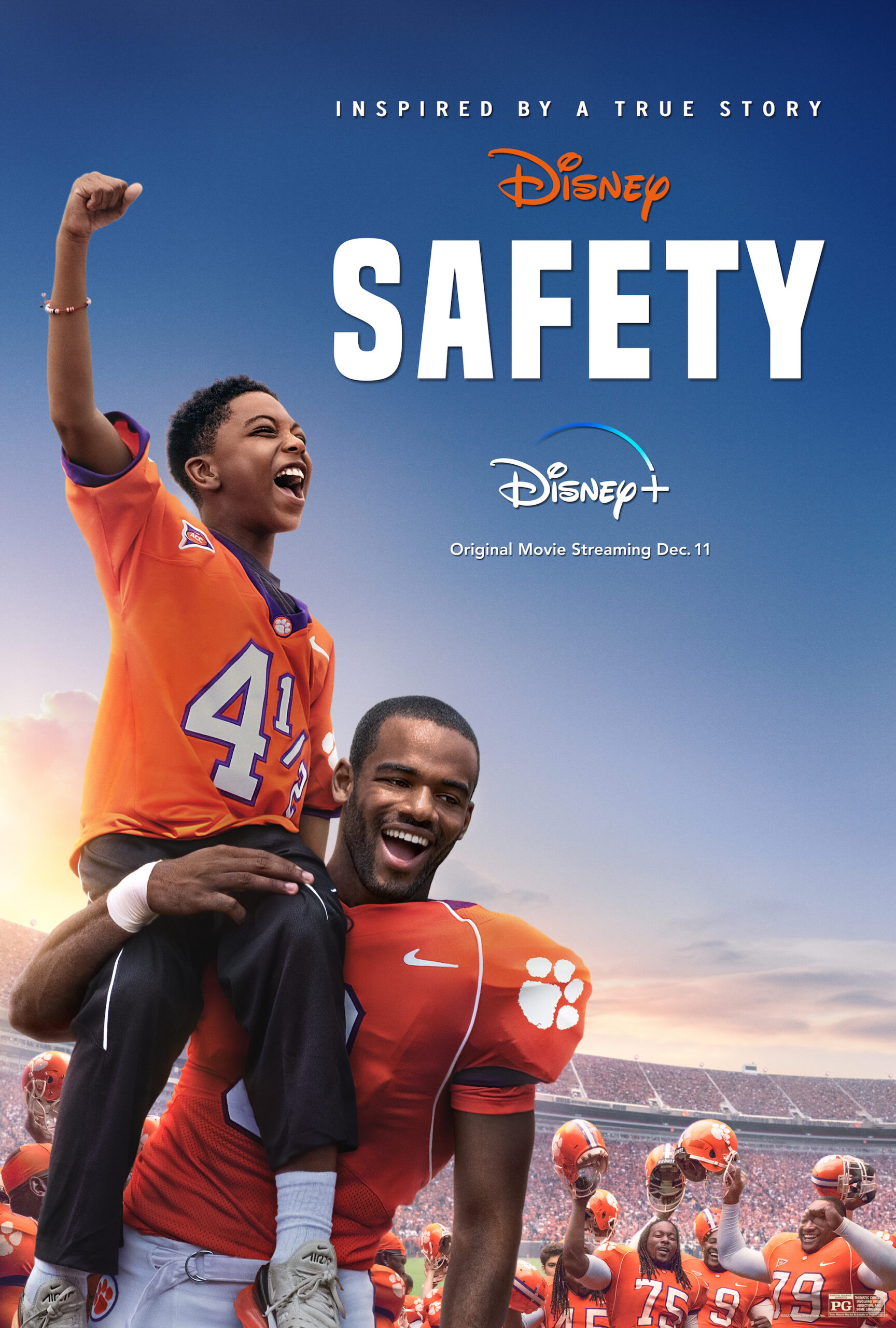 Disney’s’ Safety reminds us that life’s battles are more easily won when we have the support and love of others. Based on the true life story of Ray McElrathbey, who played on the Clemson Football team while managing the heartbreakingly challenging situation of having to adopt his little brother, the film tells the kind of inspiring story that we all need right now.

I’ve been thinking a lot about the types of stories we’re going to get in the next few years coming out of this worldwide pandemic. Our media is so often shaped by human experience that it will be interesting and a bit terrifying to see how this period of our lives will shape the stories to come. The flip side of course is the question of what types of media will we want to consume? For me, I’m eager for stories that remind us of the collective good we’re capable of in the face of adversity. We need films like Safety and I hope we don’t forget to tell more of these types of stories.

Below is my review of Disney’s Safety, streaming on Disney+ this Friday! Spoilers below!

Safety is a drama inspired by the empowering story of former Clemson University football safety Ray McElrathbey (Jay Reeves), a young man facing a series of challenging circumstances, whose dedication and persistence help him to triumph over repeated adversities. Aided by his teammates and the Clemson community, he succeeds on the field while simultaneously raising and caring for his 11-year-old brother Fahmarr (Thaddeus J. Mixson).

Despite the setting and the packaging, Safety isn’t a sports story. This isn’t Remember the Titans or Rudy. Those films (which I also loved), explicitly told stories that focused on an athlete or team, with success being defined by what happened on the field. While Safety is about a student-athlete, what happens on the field is really tertiary to the point of the story. Instead, I would define Safety as a human interest story of youthful resilience, friendship and found family.

If you like sports, the fact that the events that inspired this film occurred around a team which has become one of the most successful college football programs in the country will resonate. McElrathbey played at Clemson from 2006 to 2008, which really wasn’t very long ago, and while their football program wasn’t quite the powerhouse at that time that it is now, sports fans have heard plenty about Clemson over the last half decade.

If you don’t like sports, don’t be dissuaded. We’ve all heard the African proverb, “It takes a village to raise a child,” and that proverb is central to the theme of Safety. It really has very little to do with football. Instead, it’s a story of an unlikely village that happens to take place at Clemson University.

During a time when so many of us feel isolated and alone, the “good” of Safety stings a bit. We see a 19-year-old Ray struggling to keep his 11-year-old brother Fahmarr safe while everything else around him falls apart as a result. He can’t focus on his studies, his football plays or his relationships. Everything changes when Ray’s roommate Daniel (Hunter Sansone) encourages him to enlist the aid of his Clemson teammates, and eventually, their coaches too. When everyone from the coach’s wife to the local church members happily pitch in to make sure Fahmarr is safe and secure, Ray excels in the classroom, on the football field and even romantically with Kaycee (Corinne Foxx). It reminds us that we don’t need to suffer in silence. Ray tries so hard in the beginning to hide Fahmarr and raise him alone that the strain doesn’t leave him with capacity for anything else in his life. Many of us can empathize with that strain of isolation right now and my hope is that stories like this can remind us of the vital importance of lifting each other up (even from a safe social distance).

Beyond the themes, what makes you feel good watching this movie is the outstanding music. From Lauryn Hill’s Doo Wop (That Thing) and Can’t Take My Eyes Off You to Outkast’s Hey Ya! I’m really going to need the Safety mix-tape. What I loved was how seamlessly the tracks were inserted into the film as part of the story, instead of just playing over scenes. I also appreciated that the music was more present and pronounced when things in Ray’s life were going well. There’s a noticeable lack of good beats when Ray is struggling, and they return once others step in to shoulder the load.

The most important relationship in the film is obviously that of Ray and Fahmarr. Jay Reeves, who plays Ray, and Thaddeus J. Mixson II, who plays Fahmarr, have a strong rapport and a very believable big brother-little brother dynamic. The next most important relationship is probably Ray and Kaycee, played by Corinne Foxx, actor Jamie Foxx’s daughter. I thought the relationship between Ray and Kaycee was a weak point for the story. There’s not enough time to properly develop the relationship, and the chemistry between Reeves and Foxx is more plutonic than romantic.

Beyond Kaycee and Ray’s roommate Daniel, Ray’s support system is visible but generally anonymous to the viewer. We see plenty of people lending a helping hand, including several of his teammates, but we never learn any of their names or anything about their characters beyond simply showing up. Strangely, the one other teammate we do meet and learn about is hulking team captain Ron Keller, who first bullies Ray and later begrudgingly accepts him. The point is to highlight another doubter who Ray eventually wins over, but the pay-off didn’t resonate emotionally, and the screen time would have been better spent further fleshing out Ray’s support system.

In one scene, Ray finds out that all the help he’s been receiving from the Clemson Football family may be taken away because of potential NCAA restrictions. He lashes out at one of his White coaches, poignantly accusing him of only wanting to fulfill a White savior narrative. The scene was a self-aware moment of the type of film this could have been, and the trope that many similar films have fallen victim to. Fortunately, Safety isn’t a White savior film. It’s directed by Reginald Hudlin, known for his work writing Marvel Comics Black Panther (he created T’Challa’s sister Shuri), directing films like House Party and producing films like Marshall and Django Unchained. Hudlin’s credentials are unimpeachable, and with him at the helm, Safety never feels like it’s fetishizing Ray and Fahmarr’s family struggles or glorifying any privileged savior narrative. Don’t get me wrong, this film isn’t dark or gritty. It absolutely glosses over what I can only imagine must have been a soul crushingly difficult time in the real Ray McElrathbey’s life, but I appreciated that it’s very much a Ray and Fahmarr centered story.