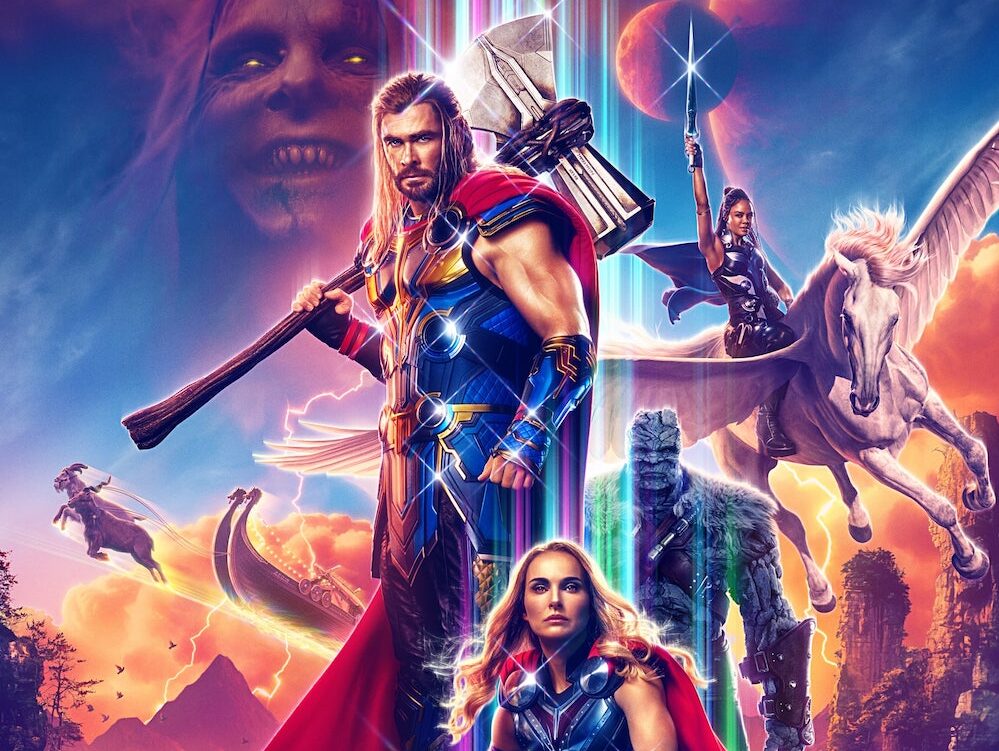 Chris Hemsworth is back in Thor: Love and Thunder, boasting the first Marvel Studios character to receive a fourth solo film. This accomplishment speaks both to Hemsworth’s enduring popularity as the God of Thunder, as well as director Taika Waititi’s successful revitalization of the franchise in Thor: Ragnarok.

Love and Thunder brings back Natalie Portman as Jane Foster and, this time, the Mighty Thor. Also returning after their respective Marvel Cinematic Universe debuts are Tessa Thompson as King Valkyrie, and Waititi himself as the beloved Kronan warrior, Korg. The quartet make the film somewhat of an ensemble film, though the story is very much about Thor and Foster.

As one might expect from Waititi, Thor: Love and Thunder is hilarious, irreverent and full of crowd pleasing moments. However, there are moments where the story development suffers in favor of the humor, and ultimately the fourth film is not quite as strong as Ragnarok, which is considered one of the very best MCU films ever. Still, fans of Hemsworth’s Thor and Waititi’s unique vision are in for an enjoyable treat.

Thor: Love and Thunder premieres in theaters on July 8, 2022 and tickets are on sale now! If you’re really hardcore, select theaters are screening all four Thor films in “Marvel Studios GOAT Marathon: Greatest of All Thor“! Light spoilers below!

In Marvel Studios’ “Thor: Love and Thunder,” the God of Thunder embarks on a journey unlike anything he’s ever faced — one of self-discovery. But his efforts are interrupted by a galactic killer known as Gorr the God Butcher, who seeks the extinction of the gods. To combat the threat, Thor enlists the help of King Valkyrie, Korg and ex-girlfriend Jane Foster, who — to Thor’s surprise — inexplicably wields his magical hammer, Mjolnir, as the Mighty Thor. Together, they venture out on a harrowing cosmic adventure to uncover the mystery of the God Butcher’s vengeance and stop him before it’s too late.

The good news is that over a decade since his first Thor film, Chris Hemsworth still looks like he’s having the time of his life in the MCU. We find Thor in Love and Thunder a God in search of purpose. He’s been through a lot and lost as much as he’s won, and while the events of Avengers: Endgame set him on the path to healing, the Thor we see in this film is still walking that path. Of course, he’s still the God of Thunder, with immense power and the charisma to match, and early in the film we get to see both in full force.

Hemsworth was always considered a perfect casting choice for Thor, and in Ragnarok, Waititi seemed to have fully unlocked Hemsworth’s potential with the character. The humor and joy both he and we found in that film certainly continues in Love and Thunder, and it’s simply so much fun to see Hemsworth on screen. He’s become one of my very favorite characters in the MCU and his talent alone covers for many of the film’s flaws.

Tessa Thompson’s King Valkyrie and Waititi’s Korg, two characters who made memorable impacts in Ragnarok and subsequent films, are once again along for the ride. Thankfully, we get to see more of both characters, including quite a bit of the two interacting with each other. Thompson’s Valkyrie is a perfect blend of confident and unbothered, and I appreciate that Marvel is leaning fully into her new role as the King of Asgard. In many ways, Valkyrie is a perfect balance to Thor, as she is always unimpressed and level-headed while Thor is often over enthusiastic (about himself) and impulsive.

Korg is beginning to rival Chewbacca as everyone’s favorite sidekick. It’s particularly fun to see Waititi, who is such an integral part of the Thor franchise, get to play a character who spends so screen time with Hemsworth. The chemistry between the two is truly something special and Marvel needs to find a way to put out more Thor and Korg content.

Love and Thunder boasts a killer, head-bopping soundtrack, leaning heavily on Guns N’ Roses, but also featuring the likes of Enya and Mary J. Blige. It’s certainly one of the most spectacularly beautiful MCU films, with impressive use of hypercolor contrasted by scenes that are best described as the death of color.

Speaking of death, Christian Bale delivers an undeniably awesome performance as Gorr the God Butcher, but the MCU version of the character is likely to be met with mixed reactions. For Bale’s part, he’s creepy and terrifying and yet finds a way to be empathetic and relatable. Gorr is intriguing to say the least, and he has some genuinely epic fights with Thor that will make fans eager to see what Waititi will come up with in his upcoming Star Wars film. However, loyal fans of Gorr from the comic books may be disappointed, especially if they are hoping for a direct adaptation (which Marvel Studios almost never does).

Love and Thunder is such a crowd pleaser that it’s going to be the kind of film where fans reference different scenes regularly. There are so many cheer out loud and laugh out loud moments that the experience of the film will be memorable.

Also, Toothgrinder and Toothgnasher are absolutely hilarious. Another stroke of comedic genius by Waititi.

As fun as Love and Thunder is, the humor and the crowd pleasing moments sometimes hurt the story and character development. It feels like so much emphasis is put on getting to the moment that will cause audiences to laugh or cheer, that the logic of the story buckles under the burden. You laugh and cheer, but later think back and wonder if that plot point really made sense for the overall story. Too often, it isn’t the best story choice, but the best comedic choice.

The film is also surprisingly heavy on exposition. Thor, Korg, Zeus and seemingly everyone else, can’t wait to go on monologues to over-explain what happened, is happening or will happen. The exposition, particularly from Korg, is intended to bridge the gap between hardcore MCU fans and casual audiences. It’s a clever way to handle the ever-growing hurdle with Marvel films, where so much has happened that aside from origin stories, current films are inaccessible to new viewers. In Love and Thunder, Korg is here to help and bring everyone up to speed. At first, it’s a welcome storytelling device, but one that’s relied on too heavily, especially in light of all the other talking that goes on throughout the film. More Korg is still a good thing though.

Of course the elephant in my review room is Natalie Portman’s Jane Foster. Portman, who has the distinct honor of starring in both Marvel and Star Wars films, returns as the Mighty Thor, dealing with personal issues and the consequences of a relationship with Thor that lacked closure. First and foremost, it should be noted that Portman, while standing all of 5′ 3″, is physically impressive as the Mighty Thor. She has clearly put in the work to don the mantle and she has earned it.

However, Portman as the world’s leading astrophysicist never quite worked in the first two Thor films and while this is her best performance in the franchise, it’s still an awkward fit. It’s one of the very rare instances where the Marvel casting didn’t do the character justice from the beginning, which limits the effectiveness of the current evolution. It’s an issue with several supporting characters from the early phases of the MCU that continue to plague newer projects. I applaud Waititi and Marvel’s ambition in bringing Foster back to tell this story, but can’t help but think that the story focus would have been better served on Valkyrie, who is ultimately still underused.

The Thor franchise started as one of the least diverse superhero films in the MCU. Aside from all-too-brief appearances by Idris Elba’s Heimdall (also criminally underused) and the Warriors Three, there wasn’t much diversity in front of, or behind the camera. Bringing in Waititi, who remains one of the too few major Māori directors, to take over the franchise gave it the much needed infusion of color in more ways than one.

Love and Thunder highlights diversity among the citizens of New Asgard, which is also ruled by a queer, Black woman King, and includes other queer relationships as well. It’s a welcome change, especially for a character based on Norse mythology, which has been overwhelmingly white in media and pop culture.

I just wish it had gone further. As noted above, Valkyrie deserves more story focus and character development. She’s a supporting character who enjoys substantial popularity amongst MCU fans, and Thompson herself is a talent with incredible range (as reflected by films like Passing and Sylvie’s Love).

Thankfully, Hemsworth and the Thor franchise look like they are still going strong, and continue to be anchors of the MCU. Hopefully more films will give Valkyrie, Korg and other diverse characters more time to shine.