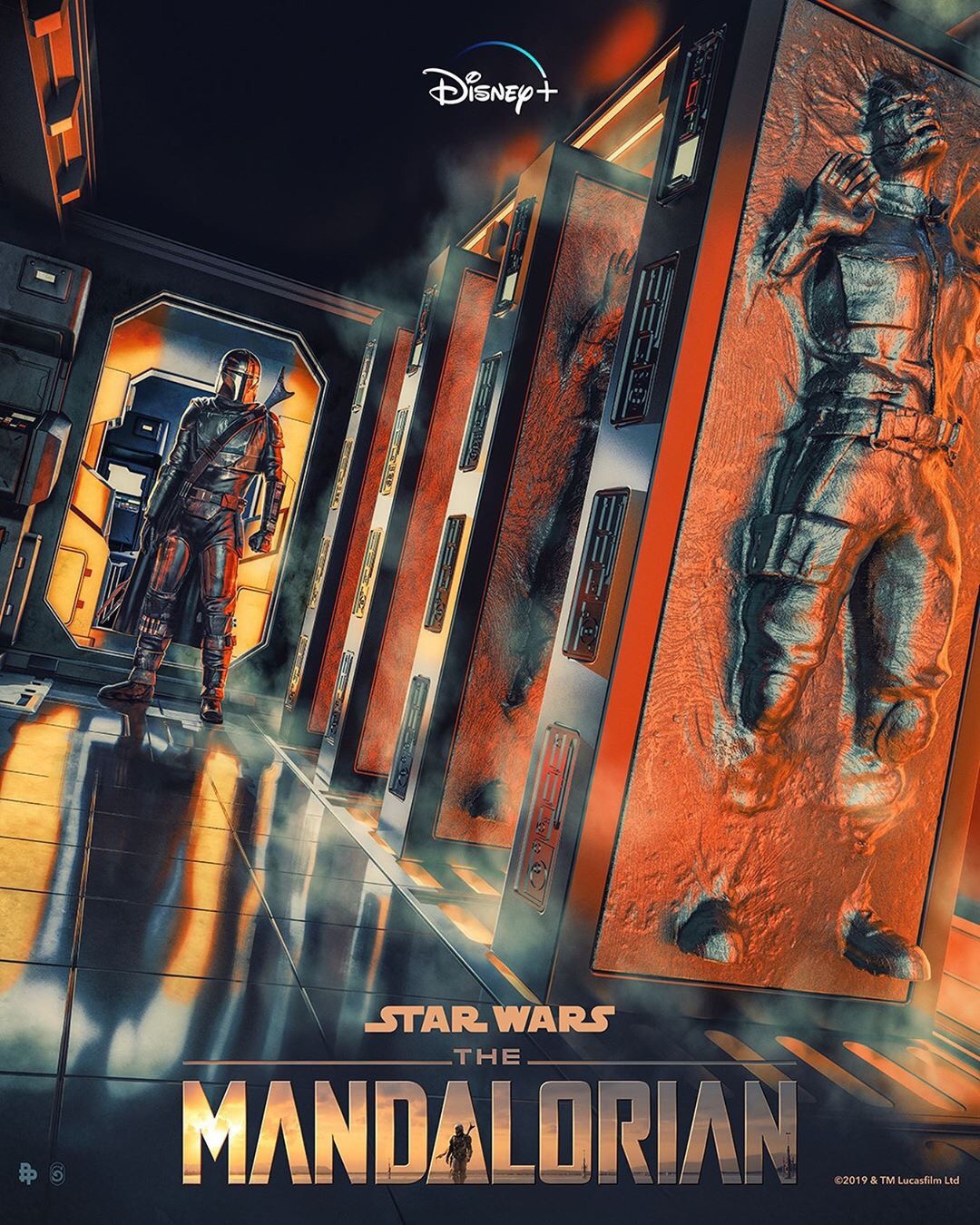 Well we finally made it. November 12th is here and Disney+ is a reality on all our streaming platforms. I’ll be honest, it’s almost hard to believe that we have access to so much incredible content at any time. Of course with the launch of Disney+ came possibly the single most highly anticipated original show premiere ever in The Mandalorian. This review will include light spoilers on Chapter 1 of the newest segment of the Star Wars universe and I’ll also briefly go over my early thoughts on the Disney+ experience. I won’t explicitly discuss plot details, especially the much talked about surprise, but I will generally reference them and give my thoughts. If you haven’t yet watched Chapter 1 then go do that and please come back! Again light spoilers for The Mandalorian below!

As always, my structure for these reviews are to reference some good, some bad and some miscellaneous thoughts in “the Pocky,” as well as a Pocky rating out of 5.

Cinematic Quality – The first thing that struck me about The Mandalorian from the first scene, or more specifically at the tail end of the first scene, is how beautiful it looks. Chapter 1 was directed by Dave Filoni, well known to Star Wars fans for not only developing The Clone Wars and Star Wars Rebels animated shows, but also for being a bit of a Padawan learner to George Lucas’ Jedi Master. While this is Filoni’s live-action directorial debut, I thought he excelled. The episode was beautifully shot and the story was told clearly. I really feel like I know what they wanted to accomplish and that they succeeded in telling their story. Beyond that, everything about the show looks like a feature film. The CGI, the action, the sets were all perfectly Star Wars.  I still can’t believe we live in a time when we’re getting this kind of quality at home.

A Tight Story – It’s always challenging to start a new era of Star Wars storytelling. Even before TV, the franchise was told as trilogies, and that always comes with greater pressure on the first “episode” to ensure that audiences will come back for more. In the case of launching a new show in a familiar universe, yet with completely new characters, The Mandalorian had a big challenge. It needed to launch its own world within the Galaxy Far Far Away, and do so quickly, within the 39 min allotted time. I think this is where Filoni’s experience with his animated shows really shined. They opted to tell a very tight, linear story that was easy to follow from beginning to end. There were virtually no twists during the course of the episode, and we simply got to ride along with our hero (?) to familiarize ourselves with this corner of the universe and its inhabitants. We meet Greef Carga, played by Carl Weathers, which informed us of how the bounty hunters work, we got a glimpse of a Mandalorian community with multiple armored individuals (including a female armor maker!), and we got to see Werner Herzog and his underworld of thugs cosplaying as Stormtroopers. This educational journey was fairly relaxed and easy to follow. The action throughout these scenes is limited and this part of the episode was reminiscent of the first act of Rogue One: A Star Wars Story. Of course, just as Rogue One ends in a triumph of action, The Mandalorian delivers here as well, giving us a final act highlighted by the introduction of Taika Waititi voiced IG-11 and a spectacular firefight.

The Mandalorian art by Chris Skinner

The Slow Worldbuilding – If there has to be something “bad” about Chapter 1 (and I feel it’s important to any review to mention some areas of weakness), it’s the necessary worldbuilding that comes with the pilot episode of a new series. Especially with a franchise like Star Wars, there’s often an expectation that each story told will be action packed and fast paced. As I mentioned above, the middle part of this episode is very similar in my mind to the start of Rogue One, where we have to meet all the new characters and the new environments. I found that we saw Pedro Pascal’s character walking around a lot. Walking to and from places. Walking through places. Just…walking. Again, the goal was to allow the audience to familiarize ourselves with this new corner of the Star Wars galaxy, and it does pay off in the final battle, but there were certainly moments when I thought the story slowed. This was further exacerbated by the fact that I never felt that the Mandalorian was ever really in danger or even what  the potential danger could be. Aside from Nick Nolte’s Kuill telling the Mandalorian (and us) that everyone who has tried to accomplish this mission has died, and a bunch of nameless villains shooting at him, it was hard to grasp the stakes of the mission. A lot of this was the story they needed to tell to launch the series and we know the larger world this show takes place in will be slowly revealed.

That Surprise – Disney/Lucasfilm reportedly chose to withhold screeners for The Mandalorian in order to preserve a reveal in the episode that would impact the larger galaxy. I won’t explicitly mention what the surprise was, but my feelings are somewhat mixed on it. It was only a brief moment in the episode, so much of my feelings have yet to be developed depending on how the show decides to handle the matter. Having said that, while I found the surprise to be pleasant and extremely interesting, I also found the characters’ reactions to the reveal to be a bit strange. In universe do the characters not know anything about this topic? Their reactions seemed to indicate a complete ignorance to the subject. I’m not sure why that would be but it created a strange scenario where our heroes (?) were more confused than the audience. Also, it’s unclear to me why this matter would have such a dramatic impact on the larger galaxy that we know. I assume we’ll find out and I think the potential directions they could take this are definitely intriguing. For now I’ll leave it at this – I definitely want to know more.

Overall I really enjoyed the episode and I couldn’t be more thrilled that we have a weekly live-action Star Wars show of this kind of quality. And even more so that it’s a show that features so many diverse creatives both in front of, and behind, the camera. Even if that wasn’t apparent in this first episode, I’m incredibly eager to see more of this world and more of the diversity that I know is coming.

Finally, a few early thoughts on Disney+ as a service. I eagerly downloaded the app on my iPhone and two Roku devices at approximately 10:30 PM pacific time. The downloads were quick and smooth. I was able to play around a bit with the user interface, and set up profiles for several members of my family. Typically, I’m not someone who uses multiple profiles. My family and I often watch the same programming and it’s not really needed on other services. Having said that, Disney+ has such a wealth of programming that, for the first time ever, I was actually excited to set up separate profiles and even save some shows that I knew my family members would like. The app was smooth and extremely intuitive. I was easily able to find various options that I was looking for with fairly minimal menu changes. Overall, I was impressed. The fluidity of the app blew my mind.

The one main issue that I see is that there isn’t a robust slate of original programming currently available. Between The Mandalorian, High School Musical, Lady and the Tramp, Marvel Hero Project and Pixar in Real Life, it seems they tried to offer at least 1 original show for each of the main IPs. Once the excitement of the extensive library wears off, Disney will need to supplement the service with substantially more original programs. WarnerMedia mentioned during their HBOMax Media Day that their research reflected that the #1 incentive for new subscribers of services is original programming. That rings true and I’m sure Disney is well aware of that. We know that Marvel is already developing several original shows and Lucasfilm has a few in the burner as well. However, the timeline of those shows is unclear and it will be interesting to see how long the handful of originals and the extensive past library will engage users.

I realize that as of this morning the service has had some issues due to the volume of users. This is an issue that Disney not only should have prepared for, but that they said they would be able to handle. I get the frustration of the users. But in the end, we know usage will stabilize and after that happens, I think Disney+ is clearly going to be a service that nearly every fan of pop culture will have to have.