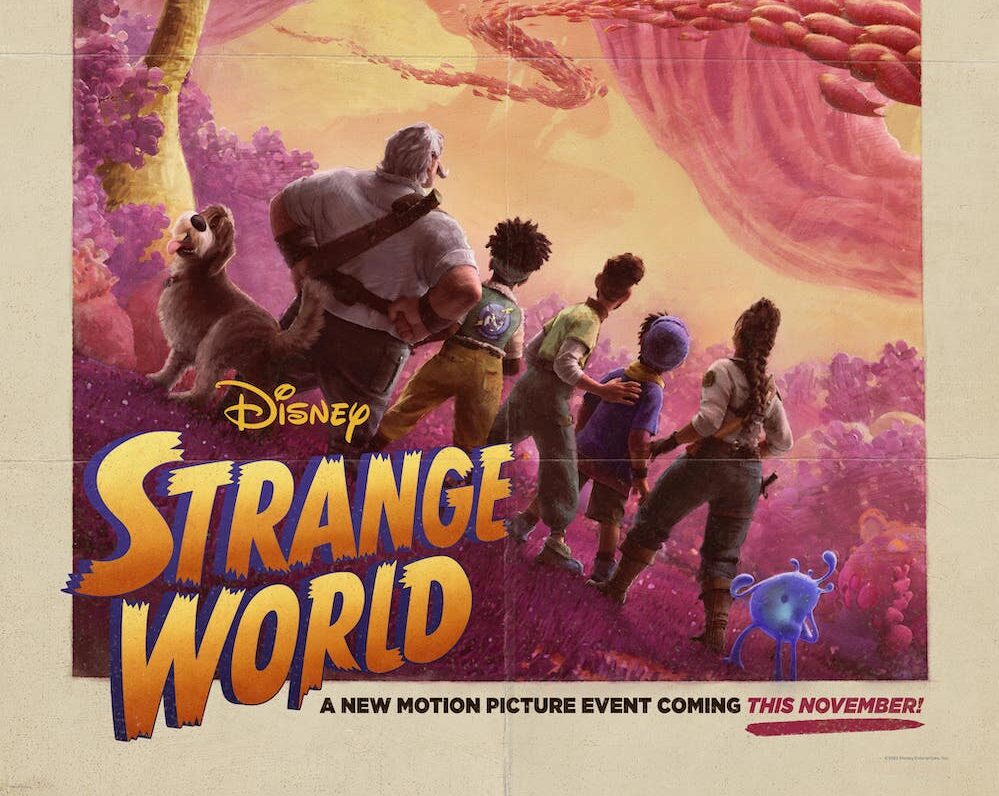 Strange World is the latest film from Walt Disney Animation Studios, featuring a story about three generations of the Clades, a legendary family of explorers. Jaeger Clade (voiced by Dennis Quaid) is a renowned explorer who wants his son Searcher (voiced by Jake Gyllenhaal) to follow his path. However, Searcher and his wife Meridian Clade (voiced by Gabrielle Union) become farmers, and have a son named Ethan (voiced Jaboukie Young-White). Ironically, Searcher falls into some of the same behaviors of his father, pushing Ethan to also share in his legacy. Suddenly, the Clades find themselves on a journey of exploration, through a bizarre world and into their own relationships, where they learn more about both.

Walt Disney Animation Studios’ original action-packed adventure “Strange World” introduces a legendary family of explorers, the Clades, as they attempt to navigate an uncharted, treacherous land alongside a motley crew that includes a mischievous blob, a three-legged dog and a slew of ravenous creatures. The voice cast includes Jake Gyllenhaal as Searcher Clade, a family man who finds himself out of his element on an unpredictable mission; Dennis Quaid as Searcher’s larger-than-life explorer father, Jaeger; Jaboukie Young-White as Searcher’s 16-year-old son, Ethan, who longs for adventure; Gabrielle Union as Meridian Clade, an accomplished pilot and Searcher’s partner in all things; and Lucy Liu as Callisto Mal, Avalonia’s fearless leader who spearheads the exploration into the strange world. Helmed by Don Hall (Oscar®-winning “Big Hero 6,” “Raya and the Last Dragon”) and co-director/writer Qui Nguyen (co-writer “Raya and the Last Dragon”), and produced by Roy Conli (Oscar®-winning “Big Hero 6,” “Tangled”), “Strange World” releases November 23, 2022.

REVIEW – A Beautiful World Trying to do Too Much

Strange World is a lot of fun, with beautiful animation. The world that the Clades explore is so creative and breathtaking, with creatures and landscapes that are just so fun to look at and very imaginative. The film feels like a sci-fi adventure, and it is really cool to see the kind of technology they have and how the world works.

One of the film’s biggest strengths is the family aspect. Ethan’s relationship with his mom Meridian is adorable. The film has a lot to do with legacy, and expectations. Searcher and Jaeger’s conflict is so entertaining. Jaeger wishes his son was into adventure like him, and just doesn’t understand Searcher at all. The idea of living in his father’s shadow greatly affects Searcher, even impacting his relationship with his own son. Despite wanting to be the opposite of his dad, Searcher ends up being very similar. The way the story develops their relationship while the characters are in the middle of a dangerous expedition to save the world is very entertaining to watch!

A very pleasant surprise for me is that Ethan is openly gay! I didn’t know prior to watching that the film would feature a gay character. He explicitly has a crush on a boy in the film, and his parents know about it! It was so heartwarming to see affirming gay representation like that. I’m not used to seeing that in big movies like this, and my heart was so full after watching. I couldn’t believe what I was seeing and I know it’s going to be so meaningful for queer kids to see themselves in Disney animation.

I really enjoyed the wonder and being in awe of the creativity in the creatures and locations in this film. I can’t stress enough how beautiful the strange world is! The family dynamic as well is very intriguing, as Searcher has a father-son story with both his father and his son.

Other characters that I’m sure will win people’s hearts are the three legged dog Legend who is so cute, and a literal blue blob that Ethan meets and names Splat. The humor created with those two characters are highlights in the film, and one gag in particular with the closet was the funniest thing to me.

While incredibly detailed and having some of the best animation work in recent years, the script is this Strange World’s weakness. Overall the story is disappointing, mostly in the first act when the film is trying to do too much. First there is the really interesting conflict between fathers and sons, then the film shifts into more of an adventure story, and later it introduces messages related to climate change. That’s a lot to think about. I would have liked to see them dive a bit deeper into fewer themes than try to explore so many at once. I really enjoyed the film, but the story didn’t do enough for me until the ending.