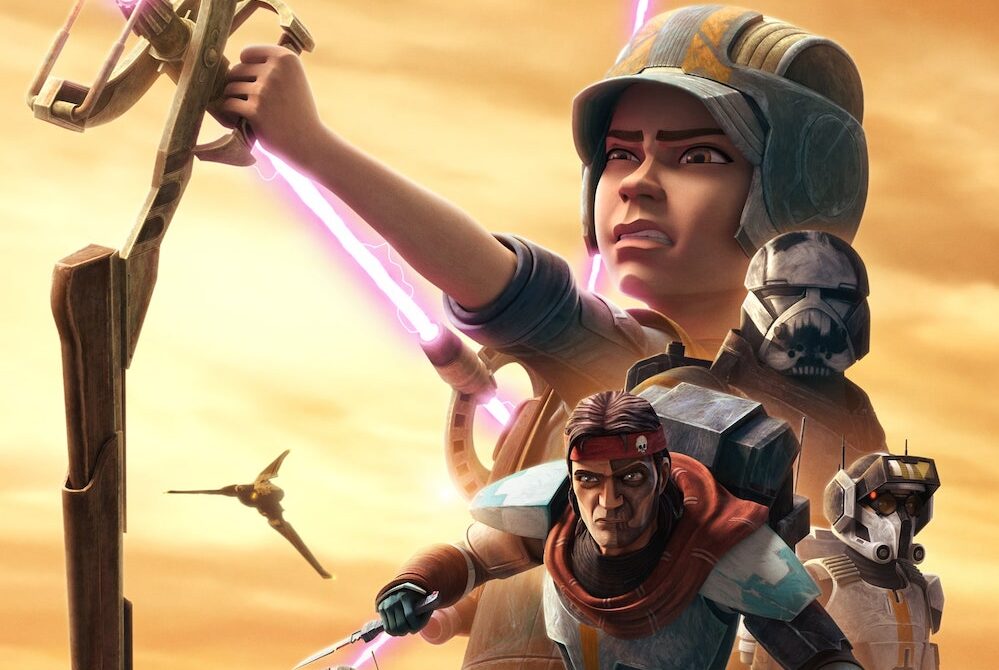 Clone Force 99, or the Bad Batch, are clones with a rich history. They were created for future story arcs of the animated series Star Wars: The Clone Wars, which was canceled before the episodes could be completed. In 2015, story reels for the squad’s introductory arc were shown at Star Wars Celebration Anaheim and released online. The group was a hit among Clone Wars fans, and the comics introduced an Imperial squad inspired by the Bad Batch called Task Force 99, or SCAR Squad (first appearing in Star Wars (2015) #21). When The Clone Wars was eventually brought back for a final season, the Bad Batch story arc was finally released, followed by their own show, Star Wars: The Bad Batch, a year later.

Season 1 of The Bad Batch began at the end of the Clone War, with Order 66 being executed, and showing the transitional period from the Republic to the Empire. The end of the first season saw the Death of Kamino by Vice Admiral Rampart (Noshir Dalal), and Kaminoan Medical Scientist Nala Se (Gwendoline Yeo) under Imperial custody. Season 2 picks up not very long after the finale and gets right into the action. The season begins with the crew’s life of hiding from the Empire and doing jobs for Cid (Rhea Perlman), the introduction of Wanda Sykes’s character Phee Genoa, and asks the question of what happens to the clones after the war? Dee Bradley Baker returns to voice all of the clones, and Michelle Ang is back as fan-favorite Omega!

This review covers 14 of the 16 episode season and is primarily spoiler free aside from some references to confirmed guest appearances already shown in trailers.

Season 2 of The Bad Batch is streaming on Disney+!

Every episode of The Bad Batch, much like The Clone Wars, feels like a movie, and it is a worthy follow-up series. The shots look fantastic, and composer Kevin Kiner once again delivers an epic soundtrack that helps enhance the show’s cinematic quality. At this point I might be as much of a fan of Lucasfilm Animation as I am of Star Wars as a franchise. Even for my least favorite episode of the season, I was stunned by the visuals, vibrant colors and lighting and vfx work. The show is just fun to watch.

Episodes 7 and 8 are some of my favorites of the first 14 episodes. They tackle a pretty serious subject matter and it’s very well done; even delivering one of my new favorite scenes in all of Star Wars. Almost all of the first 14 episodes are strong, and I haven’t felt this way about a Star Wars show in a while. If the finale is able to keep that momentum going, this season will be considered a huge success.

Season 1 of The Bad Batch did not fully connect with me. While it was a fun season, it didn’t really grip me entirely and I haven’t rewatched it. However I have thoroughly enjoyed season 2 thus far. The tone of this season is more refined. In season 1, there were moments that would deal with heavy topics, like Order 66, followed immediately by light humor, which was jarring. In this season, the show allows the viewer to sit in the uncomfortable moments and just feel the emotions, sometimes even ending an episode on that note. There are definitely lighter moments, but the show overall feels aged up tonally compared to Star Wars: Rebels or the Bad Batch arc of The Clone Wars. This season knows when to stick to a certain tone, as opposed to lifting it immediately.

I really fell in love with the squad this season thanks to the character development and various interactions. I previously didn’t care much for Tech, but now he’s my second favorite of the bunch, and his interactions with Phee are always fun. My absolute favorite character remains Omega, who I see as the best part of every member of the squad. It’s great to see her grow and learn as the series progresses. This season doesn’t waste time in developing new and old characters, and also improves on my main gripe with many Star Wars shows – the feeling that every episode of a series is just a vehicle for a new cameo.

With the confirmed guest appearances for the season I was worried that this series would suffer from the same issues as other Star Wars shows. Some fans have argued that too many guest appearances creates the feeling that the galaxy is small. However, the larger issue regarding the guest appearances is how they fit into the story being told. How a story fits guest appearances and references into the overall narrative determines whether it feels forced or organic. In the case of Andor, it was brilliantly done. Andor is a great example of a show that can have so many easter eggs, and even have up to three pre-established characters within the same episode and not have any negative impact on the quality of the story. This season of The Bad Batch also walks that line very well. The guest appearances and cameos make sense, as these characters run in the same circles. Thus, their inclusion in the story actually makes the galaxy feel more real and connected. I found myself feeling genuinely excited to see these characters, as opposed to dreading how an episode will revolve around another forced cameo.

While I love the season, one frustrating element is that Omega’s origins are largely ignored. We know she is a clone of Jango Fett and, like Boba Fett, doesn’t have accelerated aging. Ever since her introduction, fans have been waiting for confirmation of Omega being transgender. Trans representation is happening in Star Wars publishing. In fact, the novel Queen’s Hope by E.K. Johnston includes the first appearance of Sister, a trans clone who fights alongside Obi-Wan, Anakin, and her brothers. Transgender representation is vastly needed on-screen, both in live action and animation, especially with the constant attacks on transgender youth in this country. It would be so meaningful for Lucasfilm to explicitly represent trans kids in this show, as Omega would be Star Wars’ first on-screen trans character. There’s still the possibility that this will be addressed in the final two episodes, but I’m not counting on getting confirmation there; I’d love to be proven wrong!

Further, while so much happens this season, Hunter and Wrecker don’t have a lot of character development. That may be the cost of all the other stories that are covered throughout this season. With so many characters involved, some can’t be explored as thoroughly.

Overall, I left most episodes feeling so excited and in awe at what I had just watched. I felt like I was a kid again watching Star Wars: Rebels, giddy with excitement to see what would come next. I cannot wait to see how the season ends in March!