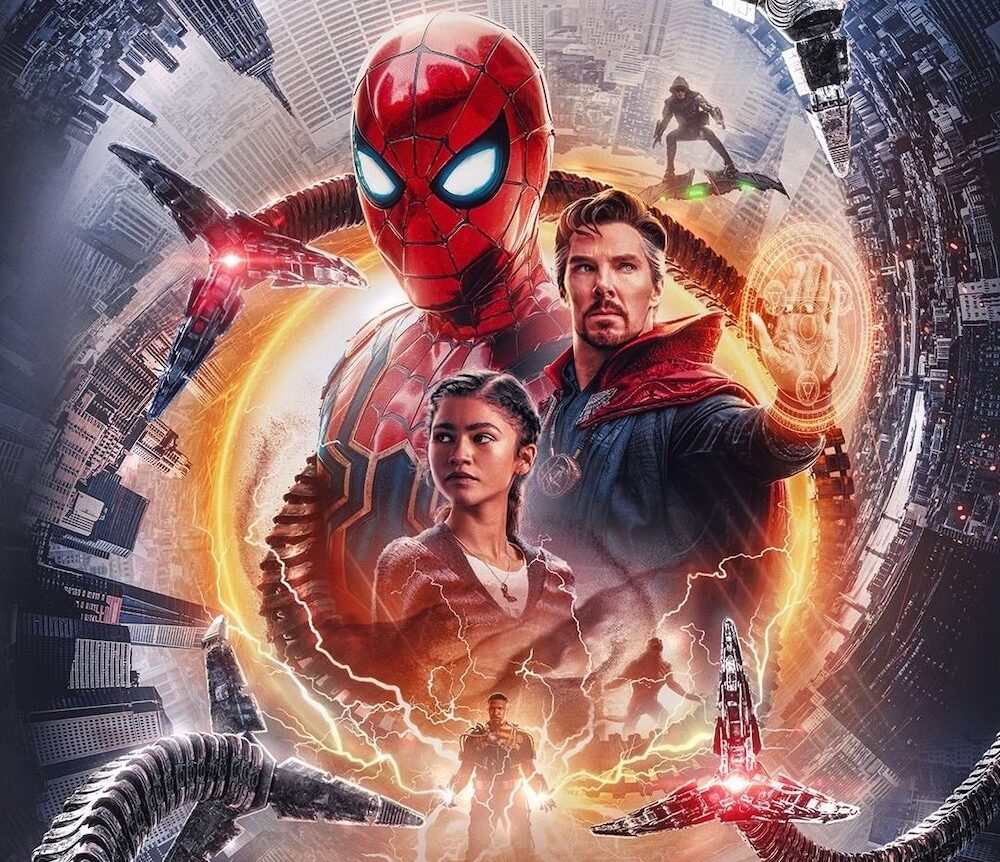 Cinema has seen it’s fair share of Spider-Men, and if you’re a Marvel fan, or just a fan of superhero flicks, there’s a pretty good chance you’ve seen the web-headed mask inhabited by a couple of difference faces, led by different directors, surrounded by different casts. While fans will continue to debate who did it best, the Marvel Studios/Sony Pictures version has been one of the best thus far, and with Spider-Man: No Way Home, Director Jon Watts looks to cement his trilogy as the greatest telling of the Spider-Man mythos yet.

For the first time in the cinematic history of Spider-Man, our friendly neighborhood hero’s identity is revealed, bringing his Super Hero responsibilities into conflict with his normal life and putting those he cares about most at risk. When he enlists Doctor Strange’s help to restore his secret, the spell tears a hole in their world, releasing the most powerful villains who’ve ever fought a Spider-Man in any universe. Now, Peter will have to overcome his greatest challenge yet, which will not only forever alter his own future but the future of the Multiverse.

The buzz surrounding this movie since it was announced over two years ago has been astronomical—and for good reason. The sophomore entry revealed Spider-Man’s identity to the global public, which sent ripples through Peter Parker’s personal (and alternate) life. To remedy this, he enlists the help of the (almost) Sorcerer Supreme (we’ll get back to that in a second), hoping he can reverse the damage done to himself—but primarily to his friends. Marvel Studios President Kevin Feige promised “a Peter Parker story that has never been done before on film,” and No Way Home delivers.

Our main crew is all here: Peter Parker (Tom Holland), Michelle Jones (Zendaya), Ned Leeds (Jacob Batalon), Aunt May (Marisa Tomei) and Happy (Jon Favreau) all return to their roles with fervor. In their third outing the chemistry abounds; everyone plays off each other well and embodies the characters beautifully. The new and old additions to the cast gel well too, while still retaining their senses of self and unique tones.

It’s impossible to mention characterization without touching on the performances of Alfred Molina and Willem Defoe, of course. Whenever these two are on camera, they don’t come to play. They approach their respective roles with as much intensity and sincerity as if this was their first outing—frankly, if they were the only two villains of the movie, they would’ve carried it just fine. Molina and Defoe are acting powerhouses.

I’m a big stickler for the pacing of the film (“Is it rushing or dragging?” as J. Jonah Jameson actor J.K. Simmons might ask in another timeline), and the pacing of No Way Home is masterful. It’s rare that a movie can juggle two villains properly in 2-plus hours, let alone as many as are presented here, without fumbling its way to the conclusion. Yet, director Jon Watts pulls it off with style and consistency. Of course, the cinematography that comes with battling said villains is gorgeous all around; the camera work is impressive from start to finish, the action scenes are never confusing, and the graphics and VFX are as good as it gets. Spider-Man: No Way Home goes big and wins big at every turn.

The score for the Marvel Cinematic Universe Spidey trilogy is probably one of the more underrated ones, but this time around it is definitely enhanced with the inclusion of some fan favorite themes. One just has to be impressed with what the cast and crew of No Way Home achieved with this film. There’s a thoroughness they bring in consolidating the past, while introducing the future of the greater MCU. Tom Holland shines (earning his “Best Peter AND Spider-Man” praise), Marisa Tomei pulls on all the heartstrings with subtlety and even Jon Favreau excels with his limited time on screen.

Yet, with all of that, Spider-Man: No Way Home isn’t quite the perfect film (although it’s close). There’s plenty of humor to go around and while it’s generally well done and consistent with the series, there are some moments when they could have scaled it back in favor of letting the emotional weight of some scenes really marinate. Everything doesn’t need to be defused. And even the Universe’s greatest wizard can’t overlook the plot-induced stupidity of bending space and time over a first act oversight—and he makes sure Peter knows that, in a very humorous exchange.

But, nitpicks aside, Spider-Man: No Way Home is the best entry in the series yet, and by far the greatest third act we’ve seen in a superhero flick to date. It’s hard to describe what really makes the film tick without going through some of the more revealing details, but trust that no matter where you stand on the cinematic Spider-Men debate, this movie exceeds the hype with some of the the best action, drama, comedy and climax I’ve seen on film. This is the Spider-Man movie you’ve been waiting for, and easily the movie of the year.