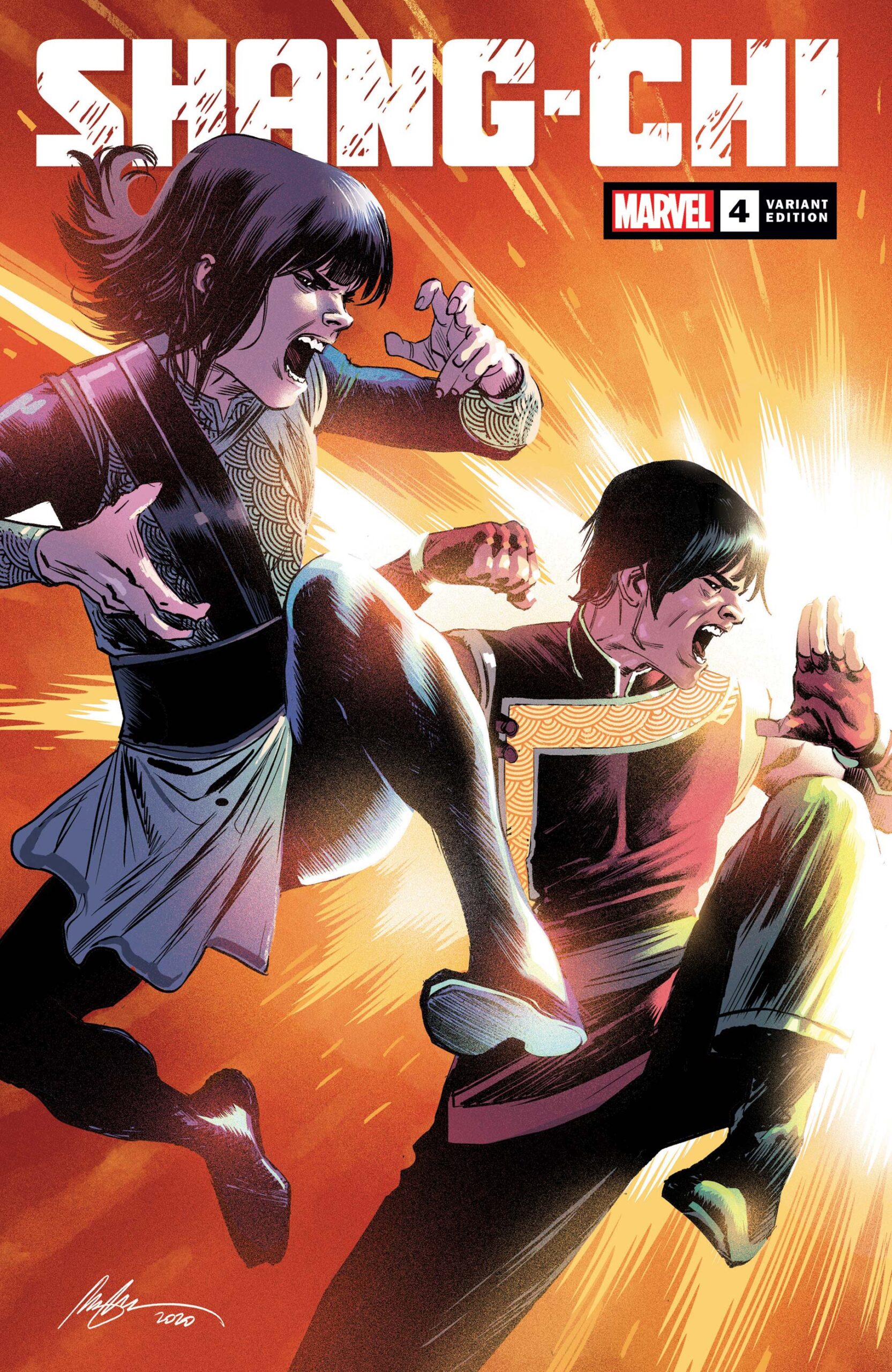 Shang-Chi‘s story has always been about family. His origin is tied to his father, and his mission has always been to stop his father’s evil plans. This miniseries by Gene Luen Yang, Dike Ruan and Philip Tan is no exception. It’s definitely a family affair. The nuance though is that this story is much more than just about an evil dad, and that becomes clear in this penultimate issue.

In issue #4 of the 5 issue mini-series, Shang-Chi, Brother Blade and Sister Dagger are in search of Shang-Chi’s uncle’s tomb. There’s been a heavy dose of mysticism in this series thus far and this issue in no exception.

Writer: Gene Yang
Penciler: Philip Tan, Dike Ruan
Cover Artist: Bernard Chang
Shang-Chi is at death’s door! The Deadly Warrior is dying from a mortal wound, and it looks like there’s only one person who can save him…his father? But he’s dead…right?

This issue takes the story to wonderfully weird places. The whole series has had healthy doses of mysticism and this book takes it to a new level as Shang-Chi is in search of his uncle Zheng Yi’s tomb with the help of Brother Blade and Sister Dagger. First, they run into this bizarre beast that looks like an amalgamation of a lion, a human and a dragon. I loved the unusual design of the monster. There’s some great action as Sister Dagger and Brother Blade hold the monster back so that Shang-Chi can press forward for Zheng Yi’s tomb.

When Shang-Chi finds the tomb, the first thing he does is pay respects by performing the tomb-sweeping ritual. This scene is a perfect example of the authenticity that Gene Luen Yang brings to this story. I loved seeing Shang-Chi take a moment in his journey to make sure that he proceeds respectfully. Of course, that ends up being the key to revealing Zheng Yi’s spirit.

The ensuing conversation between Zheng Yi and Shang-Chi reveals the surprising truth about Fu Manchu’s Zheng Zu’s origin story. He wasn’t the ruthless killer he claimed to be, and he didn’t kill his own brother for power. Instead, faced with the inevitability of death, Zheng Yi sacrificed himself to ensure his brother would live on. Unfortunately, the loss of his brother threw Zheng Zu’s life out of balance, causing him to descend into darkness. The lesson is simple – life requires balance, and Shang-Chi must understand that he can’t move forward by denying the reality of his family history.

The issue closes with the monster revealing to Brother Blade a post-apocalyptic vision of the disaster that would occur if Shang-Chi actually embraced his role as commander of the Five Weapons Society. The previously enthusiastically loyal Brother Blade is shaken and now looks like he’s going to turn on Shang-Chi in the next issue.

Through this series, Gene Luen Yang has been trying to balance the development of Shang-Chi as a fully fleshed out character (something that’s never happened before), and the martial arts action that readers would expect. It’s been a mixed bag, with some issues being light on action (issue #2), and others coming through strong (like issue #3). This issue had a good amount of action with Brother Blade and Sister Dagger battling the monster, but Shang-Chi himself doesn’t fight a whole lot. Yang has done a masterful job of writing Shang-Chi the person, but I would like to see the final issue show Shang-Chi in all his deadly fisted glory.

The overall message of this story is so poignant and relevant to many readers who have messy families (and who doesn’t have messy families?). In particular, it’s a theme that diaspora families can really connect with. So many of us who grew up with immigrant parents want to disassociate ourselves with the “old ways.” But as Zheng Yi reminds his nephew, the key is finding balance.

Zheng Yi asks Shang-Chi what he wants, Sure he wants to stop Sister Hammer. Yes he needs to be healed from his strange zombie wound. But as Zheng Yi notices, those aren’t his primary motivations. Instead, Shang-Chi admits that what he really wants is to get away of the messy entanglements of his family. “I need to be free of this. All of this,” Shang-Chi says. “There’s an entire world out there, separate from my father’s cult! I want to live in that world!” Of course, everyone can empathize with Shang-Chi in this moment. Who wouldn’t want to get away from an evil mastermind father? Especially for a character like Shang-Chi who was raised in a bubble and deceived about the ways of the rest of the world. Going back to the first issue of this series, we recall Shang-Chi happily working at a San Francisco Chinatown bakery, making a connection with his employer’s niece, and relishing a normal life.

However, things aren’t that simple. As his uncle reminds him, ‘[Y[ou’re seeking to escape your family. But your family will always be a part of you,” Zheng Yi says. “You must find balance with them.” As much as Shang-Chi wants to be “normal,” he’s not going to get that by denying the reality of his family.

There aren’t many writers who can weave such impactful themes into an action comic like Gene Luen Yang.