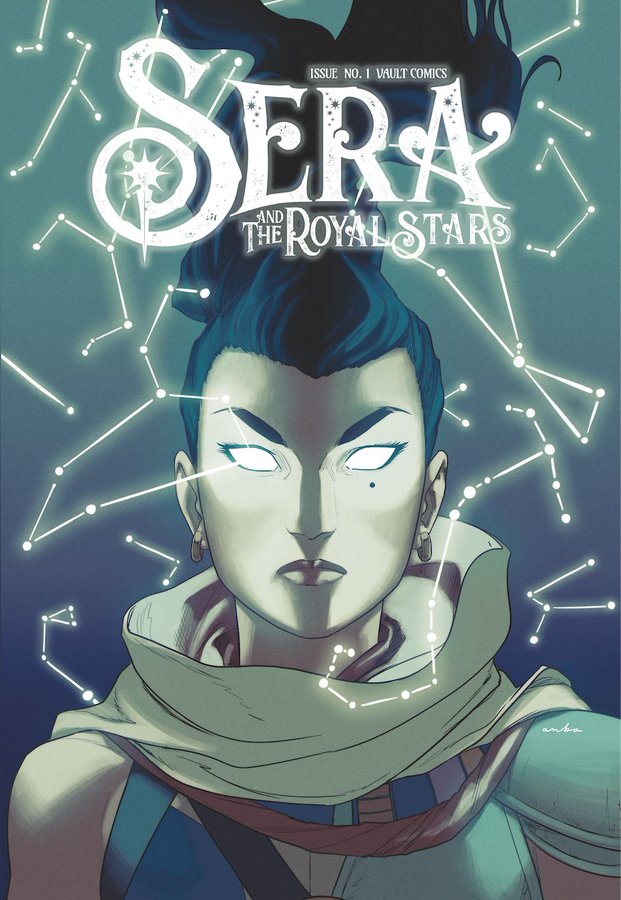 Sera and the Royal Stars #1 from Vault Comics releases today and it’s an absolutely beautiful introduction into a fantasy world inspired by Ancient Persia. Written by Jon Tsuei, with art by Audrey Mok and colors by Raúl Angulo, Sera and the Royal Stars draws you in with incredible visuals that remind you why people love comics.

Full disclosure, I was first drawn to this comic simply because Jon Tsuei was writing it. I have a lot of respect for Tsuei because of his great work with Image Comics and also because he’s a vocal supporter of Asian representation. Having said that, when reading through the first issue of Sera, what really stuck with me was the beautiful art of Mok, and the colors by Angulo that really pop off the page. I enjoy comics, but wouldn’t consider myself a hardcore fan by any means. Often times, I find myself frustrated when the art in a comic doesn’t impact the storytelling in a memorable way. I’m happy to say that that isn’t the case with Mok and Angulo’s work in Sera. Even if Tsuei didn’t write a single word in this book, the art would make you want to learn more about this world.

Fortunately, Tsuei did write words and he effectively executes the difficult task of introducing a brand new fantasy world, a variety of new characters, a fantastical mythology (complete with some god-like being) and the driving force behind the story. This is no easy task. There’s a reason why studios are constantly turning to remaking existing properties and don’t want to take risks on original work. It’s hard to get an audience to buy into learning about a completely foreign world. Tsuei handles all of that gracefully as the first issue is laid out cleanly and clearly. By the end of the issue, you have a good grasp of the world we’re in and who the characters are and, most importantly, you want to know more.

Art and Colors – I’ve already gone on quite a bit about how much I love the art and colors in this book. You really have to see it yourself to fully appreciate how beautiful it is. I should add too that Vault teamed up with an all-star roster of diverse artists to release several fantastic variant covers for issue #1. Variant covers include work by Irene Koh, Kris Anka, Jen Bartel, Ariela Kristantina, Melissa Pagluica, Nathan Gooden, Natasha Alterici, Matt Ritchie, and Anna Zhou.

Diverse Characters and Creators – Given that this is a site called POC Culture, obviously I care about work that is created by, and centered on, diverse people. It’s really great to see Tsuei and Mok create a fantasy world where the protagonist is a brown skinned woman, and the world around her is dominated by brown people. Fantasy is a genre typically dominated by white, blonde-haired heroes and I really loved flipping through the pages of this book and seeing something different. I think too that it’s notable that the story and art are so good that we’re about 5 paragraphs into this review before I’m focusing on the diversity.

Need More Brown – I wrote above about how this story is by and about diverse characters, and the world they’ve created is inspired by Ancient Persia. Having said all that, if I had to nitpick, my one criticism is that I wish the characters were even more brown. Make no mistake, Sera is brown. Her family is brown. But there are certain panels where they look strangely lighter than I would have expected.

This section is basically the miscellaneous section (and I love Pocky). As I read through this first issue of Sera, I found myself genuinely curious about the inspirations for the story’s visuals. The clothing, the architecture and even the mythological characters seem to be inspired by not only Ancient Persia, but maybe some South Asian and Native aesthetics as well. I hope one day soon Tsuei and Mok will have a chance to really delve deeply into what inspirations they drew from to create Parsa. To me, that’s what makes diverse fantasy creations like this so great. They can borrow from real world diverse cultures and create something fresh and interesting that isn’t just western focused. I’m definitely looking forward to seeing more.

In this article:Sera, Sera and the Royal Stars