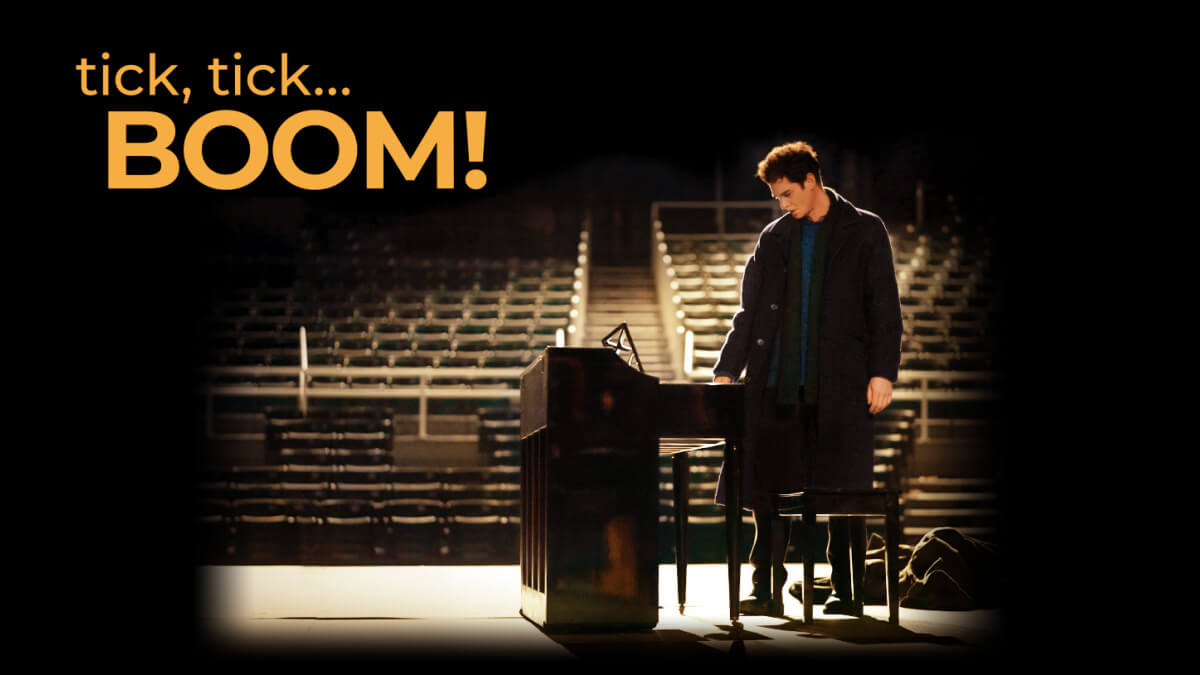 If you’re into musical theater and movies, Lin Manuel Miranda’s directorial debut, Netflix’s tick, tick…Boom! is just for you. This movie is a love letter to musical theater fans and the work of Jonathan Larson, who created the original Tick, Tick…Boom! and Rent. You can tell this is a movie that Miranda wanted to make, and he loved doing it. In an interview, Miranda said that he understood many of the lived experiences that Larson went through, and that he’d kick himself forever if he didn’t get to direct this film, or hate whoever else got this gig. Miranda felt that if he knew how to direct anything, it’s this, and he was right. This is an impressive directorial debut.

tick, tick… Boom! is about the struggles and anxiety of starving artist Jonathan Larson and how he could not get his dystopian play Superbia produced. One of the main conflicts is his inability to write the pivotal song at the turning point of his play. Once he does write it, it mirrors his life in a great way and is a standout song of the movie.

Larson died at the young age of 35 of an aortic aneurysm, the same day his successful musical Rent premiered in 1996. He did not get to see it become a worldwide hit. His one man show Tick Tick…Boom! which he wrote in 1990, was made into a three-person off-Broadway musical in 2001, and Lin Manuel Miranda actually played Jonathan Larson in the musical in 2014.

tick, tick…Boom! is a very emotional, character driven movie that will be enjoyable for all audiences. During a Q&A panel following the AFI premiere of the film, Lin Manuel Miranda talked about creating the choir of Jonathan Larson’s dream. Miranda asked those in attendance not to spoil the special appearances, so you’ll have to check the film out to find out! If the premiere audience is anything to judge by, it will be a crowd pleaser. It was very fun to see how big of a deal that scene was by their enthusiastic freaking out.

In Andrew Garfield’s debut musical, his acting skills – which we know are exceptional – are equally matched by his singing ability. It’s hard to believe he never really sang professionally before. His portrayal as Jonathan Larson really showed well his struggles as a starving artist, fighting to survive in the Big Apple. I think many will find Larson’s dedication to his craft relatable.

The “tick tick” noise Larson hears throughout the movie is his anxiety, representing that the clock is ticking to finish his song, his 30th birthday is coming, and his own mortality, among other things. He is surrounded by death amidst the AIDS epidemic, and has lost many young friends to it recently.  A big theme of the film is, what do we do with the time we have? And it is something Larson struggles with, having an existential crisis over turning 30 and not being at a very stable point in his life. I think many people, including myself can also relate to not being where you want to be at any age. He also compares himself to successful stars, which many of us are guilty of.

From my screening, I can tell this is a movie for theater fans. There are several Easter eggs and cameos in one scene that the theater was going crazy over. It might be a tad confusing at first for someone unfamiliar with Larson and his work, but after some things are established, it really clicked into place and I felt like I was getting to know him and I really empathized with his struggles. I just really wanted his art to be made! There are also jokes about New York, and an entire song about crappy apartment buildings, which I’m sure those familiar with the city will enjoy.

Regarding the music, the song “Sunday” had some really fun shots that made New York feel beautiful. The song “Therapy” was about a rather tense scene, but it was hilarious and a nice contrast from the previous scene. It’s a skill to be able to do something intense and serious, then make your audience break out into laughter. “Boho Days” is an acapella song that Andrew Garfield sings after the party, which highlights his charisma and voice at the same time. He just starts the beat with his hands and sings out of nowhere. His friends join in at the end of it, and it’s a very fun moment. The song has been stuck in my head for three days.

While I really enjoyed the movie and getting to know his struggles, I found it a little confusing at first. The movie opens with a musical number on a stage, “30/90” from the original play; it then cuts to the main story, and goes back and forth between Larson on stage, and the story he is telling. I was a little confused by that, but once I understood it, the film really gripped me! Musical theater enthusiasts will probably understand this from the get go and not have this issue.

That being said, the beginning of the film opens with a monologue that mentions that some of the moments we see are things that Jonathan made up. I have to wonder if the final scene with Susan is how he wished his relationship ended, and not necessarily what actually happened.

Robin de Jesus has an amazing performance in this film. He plays a queer Latino, and not only that, but his character is well developed. de Jesus and Garfield deliver gut-punching and heart-wrenching performances in the climax, what I thought was the best scene in the movie. It was followed by two emotional songs. de Jesus sings “Real Life,” and Garfield sings “Why”, which recounts and tells us about Jonathan and Michael’s friendship over the years.

In the panel following the premiere, Robin de Jesus spoke about how much he enjoyed getting to show a lovey dovey friendship between an openly gay character and a straight guy. That’s something we rarely get to see and really resonated with me as a queer LatinX person. I found it touching and refreshing to feel represented in a major film.

There are also many talented poc actors and singers involved in the movie across the board. It was great to see the likes of Robin de Jesus, Joshua Henry, Vanessa Hudgens, and Alexandra Shipp shine in their musical numbers, not to mention the cameos in a certain song. Another notable character in the friend group is transgender actress MJ Rodriguez’s Carolyn, who also stands out for her performance.