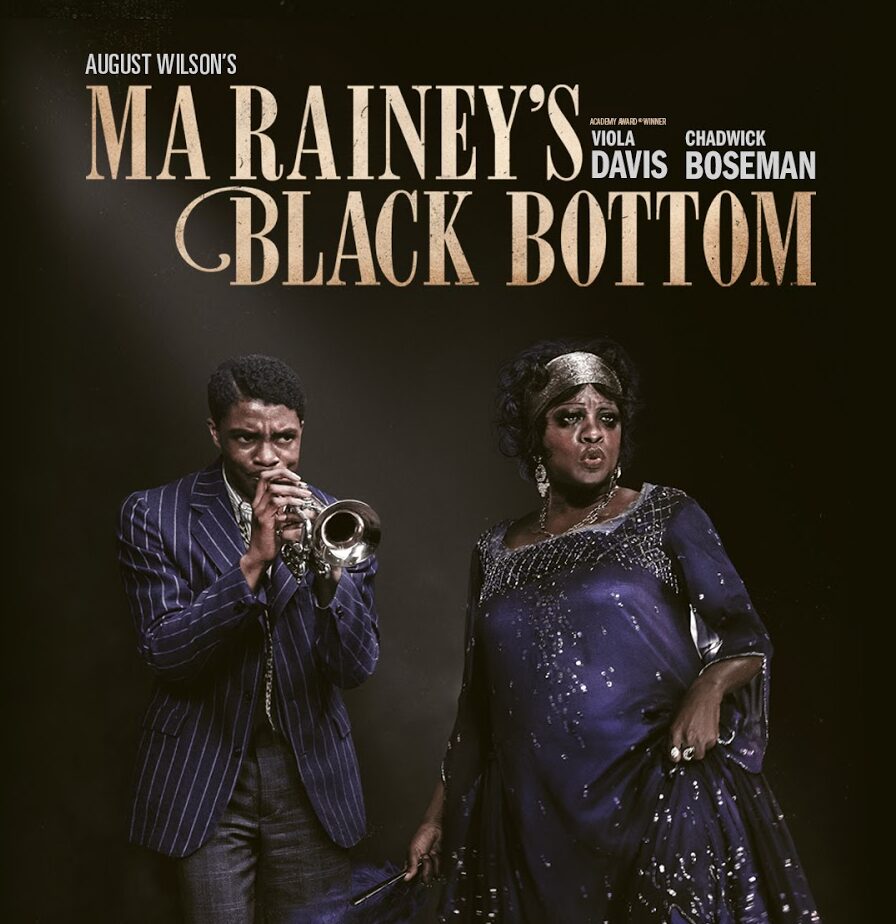 Chadwick Boseman as Levee and Viola Davis as Ma Rainey are as fantastic as one would expect, but this film isn’t carried on the shoulders of its two superstars. Colman Domingo as Cutler, Michael Potts as Slow Drag, and Glynn Turman as Toledo more than hold their own, creating a genuinely ensemble feel. Ma Rainey and every member of her band are vitally important to the music they’re performing within the film, and the music they’ve created on our screens through their performances.

Tensions and temperatures rise over the course of an afternoon recording session in 1920s Chicago as a band of musicians await trailblazing performer, the legendary “Mother of the Blues,” Ma Rainey (Academy Award® winner Viola Davis). Late to the session, the fearless, fiery Ma engages in a battle of wills with her white manager and producer over control of her music. As the band waits in the studio’s claustrophobic rehearsal room, ambitious trumpeter Levee (Chadwick Boseman) — who has an eye for Ma’s girlfriend and is determined to stake his own claim on the music industry — spurs his fellow musicians into an eruption of stories revealing truths that will forever change the course of their lives.

The film does an incredible job juggling a number of poignant societal themes, including the constant fight for respect by the Black community, micro-aggressions against Black people, the lingering affects of trauma due to racism, and the role of entertainment as both an avenue to attain wealth and power, and a distraction from societal ills. Inspired by the life of Gertrude “Ma” Rainey, the “Mother of the Blues,” and adapted from Pulitzer Prize winner August Wilson’s play, the film tells the fictional story of a one-day recording session in Chicago. Ma and her band are from the South, and primarily focus on touring, but they’ve come up to Chicago for one day to record some of Ma’s most popular songs.

Viola Davis’ Ma is a force of nature from the first moment she is seen on screen, to the final shot of her riding away from the recording studio. Her expressions are never emotionless, either exuding passion as she talks about the importance of Blues music, or manifesting defiance as she refuses to accept any disrespect from her white manager or the white producer. Ma is not a particularly likable character in this film. She’s ornery, obstinate and demanding. Everything and everyone must bend to her will. Ma shows up an hour late to the recording studio, she insists that her stuttering nephew be part of the performance and she refuses to start until she’s finished gulping down every drop of her Coca-Cola. At first blush, it’s easy to be put off by Ma’s actions. Her loudness. But as the film progresses, her perspective becomes clear. Ma is the star who generates the money. Even in the 1920s, when this story takes place, it’s not hard to imagine that the biggest white celebrities of that time were catered to. Would a white superstar have to buy their own coke, have their music composition changed, or have their salary cut to pay another performer? Ma knows that despite her status, she must fight for every inch of respect that is given so willingly to her white counterparts. Ma understands the rigged game she’s forced to play, and plays it with fury. The pervasive disrespect that Ma deals with in the film persists in our present day, and I was reminded of how often Black and brown people are told to be quiet and polite in the face of injustice.

Chadwick Boseman is lightning to Viola Davis’ thunder. Unsurprisingly, Boseman is electric in every scene, with his trademark toothy smile and unmatched charisma. Boseman’s Levee is the youngest member of Ma’s band and a talented trumpet player with big plans and dreams. While the rest of his bandmates are content to play their parts, Levee has no intention of staying in Ma’s shadow. He steals a bit of the spotlight during a performance, he rearranges Ma’s classic song to appeal to urban audiences and he even sleeps with Ma’s girl. However, Levee’s youthful arrogance is hiding trauma and anger, and in the moments when his pain spills out, Boseman truly shines. Levee’s bandmates jokingly rib him for his eagerness to please Sturdyvant, the white producer. They mock him for dancing for the white man. Unlike Ma, Levee is more than happy to play the game the way they want him to play it, as he sees Sturdyvant’s acceptance as his path to success. However, Levee later angrily reveals the trauma he endured as an 8-year-old boy, when his mother was raped by a gang of white men and his father was killed seeking revenge. Boseman’s performance in that scene is hauntingly powerful, and his ability to instantly shift from exuberant, to enraged, to sorrowful, is awe-inspiring.

To round out the band, Colman Domingo plays veteran band leader Cutler, Michael Potts plays the lovably unassuming Slow Drag, and Glynn Turman plays the introspective and wise Toledo. I expected Davis and Boseman to be excellent, but it was this trio that really stood out to me. Some of the best moments of the film were the quiet scenes when the three men, along with Boseman, are just sitting around, joking, telling stories and talking trash. Their camaraderie is vital to the story and you genuinely feel like this group is a brotherhood that plays together, works together and fights together. It’s also what makes the climax of the film so heartbreaking.

This is a dialogue heavy film, with several monologues. The performances are so strong that I found myself riveted during those monologues, but if there’s a weakness in the film, it’s probably that there’s a lot more tell than show.

Racism in its many forms is of course prevalent throughout, but there were several moments where potentially dangerous situations were glossed over. Ma gets into a car accident right outside the studio and then aggressively approaches a white police officer. The scene seems like it would end badly for the handful of Black characters surrounded by an angry white crowd, but instead it’s easily dissipated by Ma’s manager slipping some cash into the officer’s pocket. Later, Slow Drag and Ma’s nephew are sent out to buy Ma’s cokes and they walk into a market full of white men glaring at them. Again, you expect the worst, but instead the film cuts quickly to the pair back in the studio with Ma’s cokes. The convenience of those moments were jarring within an otherwise tight story.

This film is directed by a Black director, George C. Wolfe, with a screenplay by a Black writer, Ruben Santiago-Hudson, and based on a play by a Black playwright, August Wilson. Further, not only does it feature a majority Black cast, but Denzel Washington is one of the producers. Ma Rainey’s Black Bottom quite obviously excels in centering Black creatives, and is an example of the beauty of allowing authentic voices to tell authentic stories.