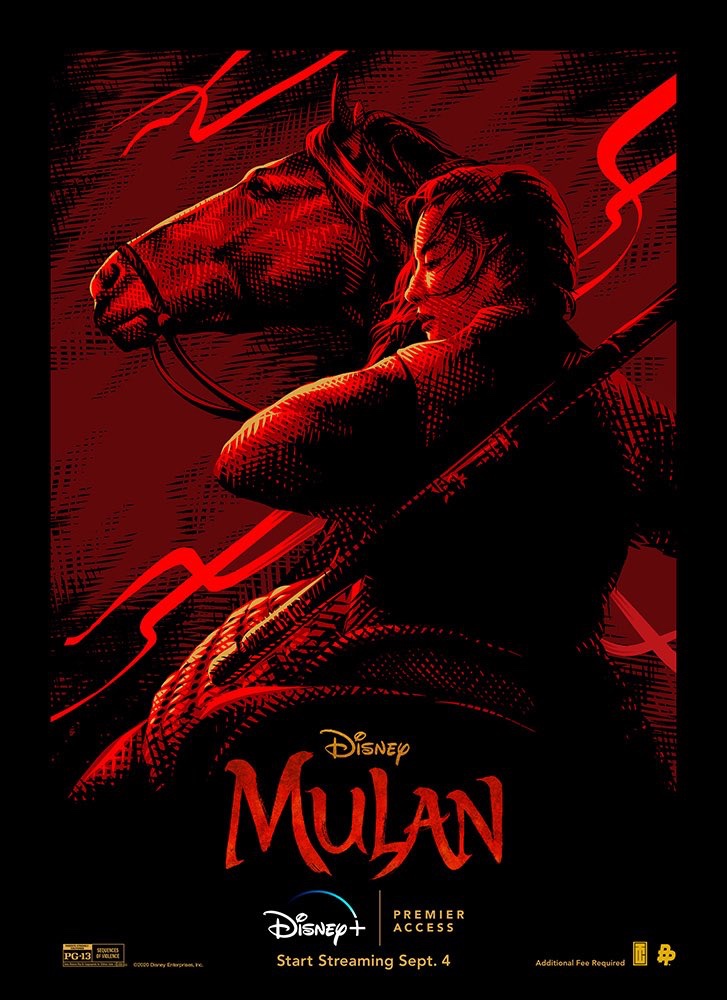 Disney’s Mulan is not an Asian-American film, but it faces a similar dilemma that many Asian-Americans face in that it’s caught between two worlds. In this case, the film has two masters – the legendary Chinese poem The Ballad of Mulan, and the 1998 Disney animated film Mulan (which was of course based on the Chinese poem). It’s not an easy balance, but this modern live-action version does an admirable job of honoring both source materials while offering an action packed adventure that firmly puts the focus on our heroine’s journey towards embracing her true self. Spoilers below!

The Ballad of Mulan has been adapted and retold numerous times. It’s one of the seminal pieces of storytelling in Chinese history, and really in world history. When Disney released the animated Mulan starring the incomparable Ming-Na Wen as the voice of the titular character, Mulan became the first Asian Disney Princess. The film itself was unique for Disney animated films in that it was an action focused epic that told the story of Mulan learning to become a warrior. On top of that, the animated film was buoyed by lovable supporting characters, a talking dragon sidekick (voiced by Eddie Murphy) and a car karaoke friendly soundtrack.

When Disney began developing live action remakes of its classic animated films, many Mulan fans wondered if their iconic warrior princess would receive the same treatment. To be clear, a live-action Mulan movie has been made before in China, but that film didn’t have to strike the balance between the original poem and the now beloved Disney animated film.

How audiences view this live-action Mulan will depend greatly on their expectations. With this kind of source material, it’s nearly impossible not to go into the film without some preconceived notions. There’s already been a fair amount of hand-wringing on social media regarding the previously announced changes, like the fact that the characters will not break out into song and that the animated film’s co-star, Li Shang, isn’t appearing in the film. Unlike last year’s live-action The Lion King, this isn’t a straight remake of the animated film, and I’m not certain how many viewers will be aware of that.

As a film that seeks to respect both source materials and stand on its own, I think Mulan succeeds. It’s difficult to watch without comparing it to the animated film, especially when it comes to the absence of music, and it’s certainly not a perfect film, but I respect what the filmmakers sought out to do.

Again, this film is not a shot for shot remake of the 1998 animated classic. Many of the main beats are there, and there are a bevy of homages throughout, but there are also some very notable differences. This story is very specifically about the importance of a woman embracing her true self, especially in the face of patriarchy and misogyny. Further, Mulan’s journey is interestingly paralleled by a new character, Xian Lang (Gong Li), and as the story progresses, the dynamic between the two become one of the most important subplots.

The story begins as expected, with Hua Mulan taking her father’s place to join the Imperial Army, but the threat this time is not Shan Yu and the Huns. Instead, Bori Kahn (Jason Scott Lee) and a mysterious witch Xian Lang lead the Rouran army intent on killing the Emperor (Jet Li).

Once Mulan joins her battalion, there are additional differences. First and foremost, Li Shang has essentially been split into two roles, Commander Tung (Donnie Yen) and Honghui (Yoson An). Gone are the cute creature sidekicks like Mushu the dragon or Cri-Kee the lucky cricket. Instead, one of Mulan’s fellow soldiers is literally named Cricket (Jun Yu).

There’s a noticeable absence of Donny Osmond’s vocals as the battalion trains, though Sergeant Qiang (Ron Yuan) does declare that “we’re going to make men out of every single one of you.” Quickly, everyone realizes that young Skywalker Mulan is strong in the Force and she impresses Commander Tung and Honghui with her fighting prowess. Then they’re off to face Kahn’s army, which leads to an impressive large scale battle scene between the two forces and ends with a gorgeously massive avalanche reminiscent of the animated film. This battle takes place just over halfway through the film as Mulan is separated from her battalion and comes face-to-face with Xian Lang. Lang’s message to Mulan and to the audience is clear – “Your deceit weakens you. It poisons your qi.”

Mulan rejoins her battalion but, inspired by Lang’s words, reveals her true self and is promptly exiled by Commander Tung. Later, Mulan discovers Bori Kahn’s plans to sneak into the Imperial Palace and kill the Emperor and runs back to warn her battalion.

At the Imperial Palace, Kahn and Lang set a trap and capture the Emperor. Mulan and her battalion arrive and Lang notes the “impossible” – a woman is leading the army. Lang, who has grown increasingly bitter with her forced service, leads Mulan to Kahn and sacrifices herself.

In the climactic one-on-one battle between Kahn and Mulan for the Emperor’s life, Mulan wins the day and saves the Kingdom, bringing honor back to her family.

Stunning Visuals – This is an absolutely gorgeous film and it knows it. The set pieces are spectacular, the wide angle shots are breathtaking and the costumes are intricate. If you’re looking for some Asian aesthetics eye-candy, Mulan has it in spades. The film isn’t hesitant to flex its beauty either, as there are plenty of shots to showcase the sprawling New Zealand landscape where it was filmed. The brilliant costumes and incredible sets really stand out and come together to make this fantastical version of China come to life. It’s not too glitzy either to the point where the costumes look completely absurd or sterile. The costume and set designers found the perfect balance of finding an aesthetic that’s both realistic and visually pleasing. The visuals really make you wish this film could be enjoyed in IMAX.

Epic Action – The action sequences are very strong for a film that isn’t exclusively a martial arts vehicle. With a cast that includes Donnie Yen, Jet Li, Jason Scott Lee and Gong Li, you know the choreography will be excellent. Yifei Liu rightfully gets the substantial bulk of the action and more than proves herself adept at handling the “wire-fu” fight scenes. Liu is a true lead, commanding the screen well and exuding a confidence and strength that one would expect from a real life Hua Mulan. Co-star Yoson An also does a great job with the physical demands of the film, acquitting himself well in the various battle scenes, including one towards the end which features a claustrophobic showdown between his team and a group of the villainous Rouran shadow warriors in a narrow pathway. As a devout Donnie Yen fan, I was thrilled to see him get a chance to showcase more of his abilities to western audiences. Yen isn’t a focal point of the film, but plays an important role in helping Mulan recognize and harness her qi. Yen does get a fair amount of action, and in one scene displays absurdly fast sword skills in a way that makes you realize how far beyond mere mortals his abilities are. Many of the action scenes, while satisfying, are heavily edited. However, Yen’s scenes are mostly single shots and they’re a wonder to behold.

Fantasy Elements – Unlike its animated counterpart, this film really leans into the mysticism. Xian Lang is repeatedly referred to as a witch, but the truth is that she’s by far the most powerful character in the film. Her qi is so strong that she’s able to shape-shift into both people and animals, and she can take down whole armies on her own. Speaking of fantasy, there are some serious Star Wars parallels throughout the film and I couldn’t help but wonder if that was intentional or not. Lang is set up as the dark side reflection of what Mulan could be, and there’s a literal “join me” moment between the two characters. Later, Mulan begs Lang to change her ways and walk the noble path, but Lang says it’s too late for her and instead sacrifices herself to save Mulan. At another point in the film, Commander Tung Kenobi teaches Mulan about the power of qi and describes qi in a way that mirrors Kenobi’s explanation of the Force in Star Wars: A New Hope.

Music – The animated Mulan was complemented perfectly by a soundtrack that featured emotionally powerful songs like Refection and thrilling (if mildly cringeworthy) songs like I’ll Make a Man Out of You. While there are a few welcome notes of Reflection sprinkled throughout this film, they only served to make the disappointing absence of music more apparent.

The Fun Factor – In an effort to make this film more intense and action focused, the story lost a lot of the humor and fun that made the animated film so beloved. Mulan is very much an action film that isn’t quite suitable for the whole family (as reflected by its PG-13 rating). My young daughter saw a trailer for the film and asked me if it was something we could watch together. It’s disappointing that I won’t be able to share it with her for at least a few more years.

In front of the camera, Mulan is a great example of Asian representation in western media. The characters speak English, are never mocked or degraded for being Asian, and Liu’s Mulan will be a great character for the younger generation of kids to enjoy. Behind the camera, I do wish there were more Asian creatives involved. While director Niki Caro and writers Rick Jaffa & Amanda Silver and Lauren Hynek & Elizabeth Martin do an admirable job re-creating a Chinese story for western audiences, I would have liked to see Asian-American creatives have an opportunity to tell this story from their unique perspective. Asian-Americans are often so limited in the stories that we’re allowed to tell and it’s a missed opportunity that Mulan wasn’t one of those stories.

In this article:Disney, Disney Plus, Disney Studios, DisneyPlus, DisneyStudios, Mulan