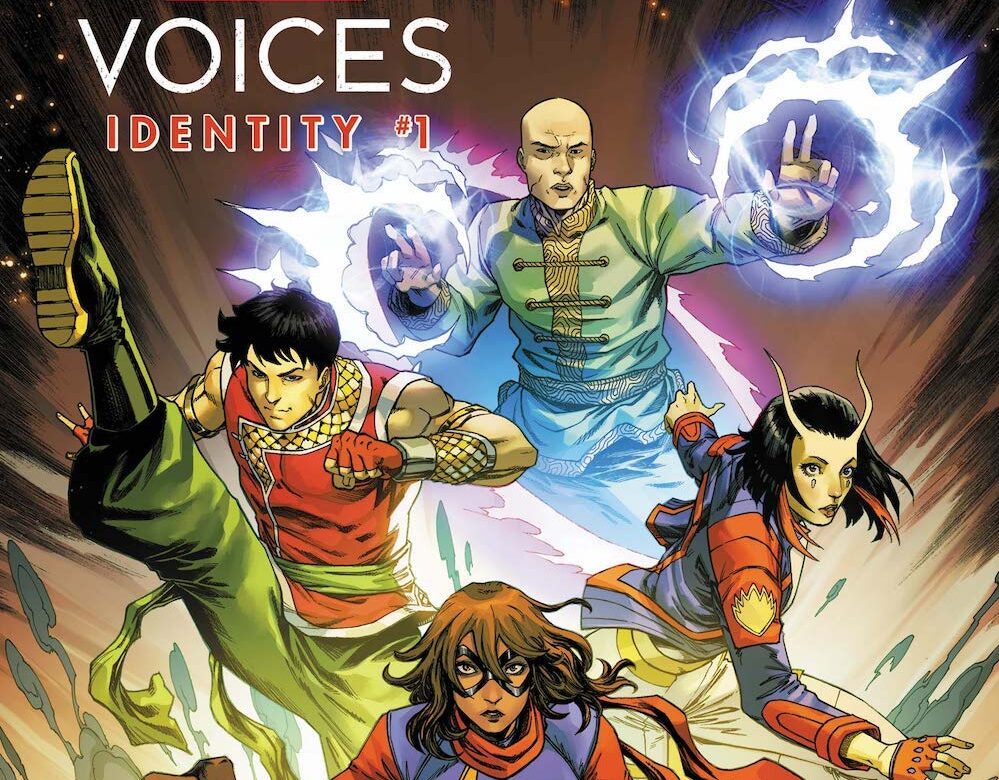 Marvel’s Voices: Identity #1 (2022) is out this year during Asian Pacific American Heritage Month (APAHM) in the US and Asian Heritage Month in Canada. This year’s anthology offers an exploration of Asian identity through self-reflection. Each short story in this anthology not only highlights specific Asian and Asian-American characters from the Marvel Universe, but also explores their sense of self and their internalized biases and fears. This makes for some powerful short stories!

REVIEW – Looking Within to Grow and Learn

This year’s edition of Marvel’s Voices: Identity (2022) #1 is a concise and mindful curation of 4 short stories that again highlight and celebrate Asian and Asian-American Marvel characters. However, unlike last year’s theme of being part of a diaspora, this year’s theme is focused on reflecting on our own internalized biases and prejudices. Last year’s anthology featured 8 short stories, so I was a bit surprised to find only 4 in this year’s edition. But fear not! This edition leans on quality over quantity. Each short story is not only a bit longer, but digs deeper into the characters featured.

Marvel’s Voices: Identity (2022) #1 features Jimmy Woo, Shang-Chi, Ms. Marvel, Mantis and Wong. So if any of these characters from the recent Disney+ shows or movies have caught your attention, this is a book that is worth checking out! “Fool Me Twice” by Sabir Pirzada, Eric Koda and Brian Reber shows Ms. Marvel working with Shang-Chi. It’s never easy to be emotionally vulnerable, and seeing Kamala Khan talk through her feelings was cathartic. “While You Were Out” by Emily Kim, Rickie Yagawa and Sebastian Cheng shows how much Wong does around the Sanctum Sanctorum when Strange is at the hospital. This short comic was action packed, but also contemplative for me as a reader. But my two personal favourites from this athnology are “Secrets” by Pornsack Pichetshote, Creees Lee and Bryan Valenza, and “The Primeval Paradox” by Jeremy Holt, Kei Zama and Irma Kniivila.

“Secrets” is not only action packed thanks to Lee’s dynamic combat sequences between Jimmy Woo and Shang-Chi, but Pichetshote’s writing and dialogue finely walks the line between external forms of racism, such as conflating two people of similar ethnicities as one person as a form of microaggression, and internalized racism. Valenza’s colour palette adds to the tension between Jimmy and Shang-Chi’s exchange and fight; the shadows and warm tone help convey the elephant in the room. As Jimmy Woo and Shang-Chi fight, the two have a very intense exchange of opinions regarding each other and their respective positionality in Asian and Asian-American identity and community. And I think this ultimately reveals their internalized prejudices and biases against one another. This is a tough conversation because unlearning our own prejudice is difficult and challenging, but it’s an important part of learning and growing.

“The Primeval Paradox” stands out to me because I’m not as familiar with Mantis (so it’s wonderful to read about her), and it’s also a story about forgiving yourself. I appreciated how much of this short comic is actually in silence because there isn’t a lot of dialogue exchange between characters. We spend most of the time from Mantis’ perspective because she is narrating her story. And that’s certainly more agency than the films have thus far given her. As she fights against this wood-like creature (Not Groot! Groot is actually very concerned for his friend!), the creature takes the forms of people from Mantis’ life – people who have hurt her – and ultimately, she works her way to forgiving herself and letting go of her fear by recognizing and embracing her inner child. I think Holt, Zama and Kniivila did a seamless job of telling this story.

This year’s edition also includes an interview with letterer Janice Chiang by Angélique Roché, and an introduction by Isabel Hsu. I love how Asian women and their experiences of getting into comics, working with comics and Marvel characters are included in this book. The one thing I would have liked transferred from last year’s edition was leaving space for each of the writers, artists and members of staff connected to this project to reflect on the question of identity. It would be great to hear the creatives speak.