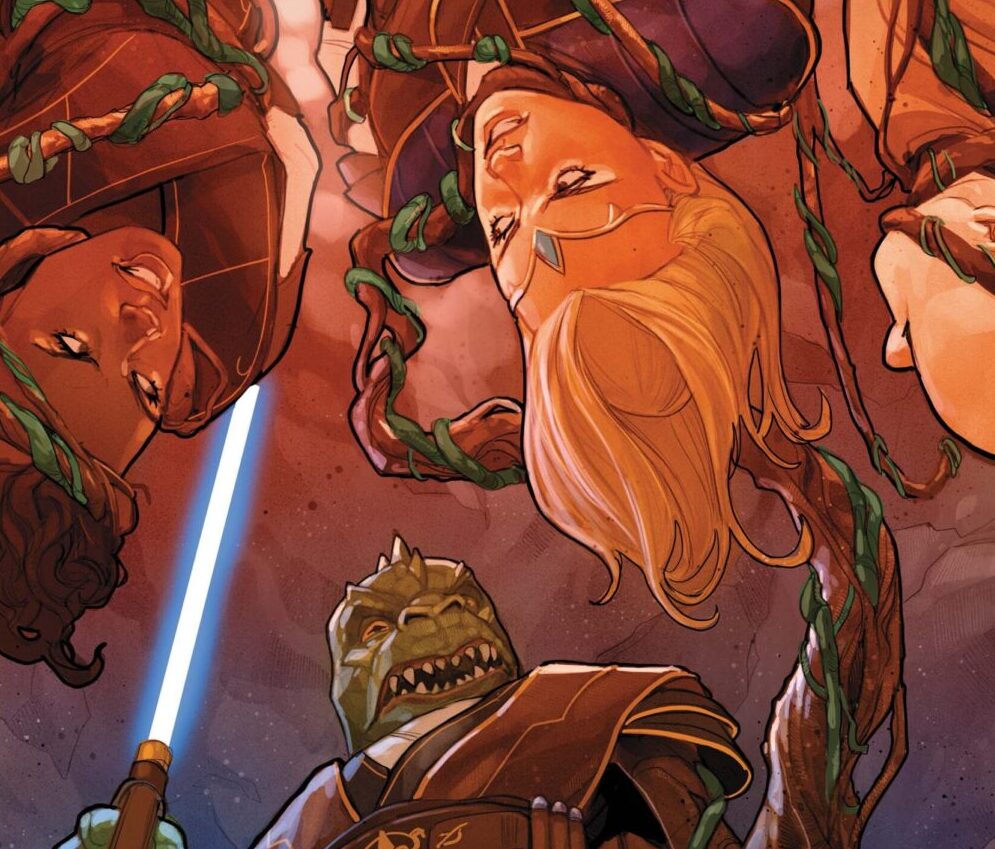 The Jedi trapped are trapped by the Drengir, and Keeve’s former master Sskeer. Will their bond be enough to bring him back from their control?

Writer: Cavan Scott
Penciler: Ario Anindito
Cover Artist: Phil Noto
THE JEDI TURNED AGAINST EACH OTHER?! AVAR KRISS and her band of brave JEDI helpless in the clutches of a traitor in their midst. STARLIGHT BEACON under attack from an insidious foe. Danger from an age-old enemy. Who is really pulling the strings on the distant planet of SEDRI? Plus: The secret history of the terrifying DRENGIR revealed.

Sskeer is still under the influence of the Drengir, and the issue opens with Keeve’s reflection of their relationship. Sskeer always believed in his padawan; he always knew what to say and he was her rock. But what happens when he’s being influenced by the dark side?

Through Sskeer, the Drengir reveals their backstory to us. In the past, they had spread all across the galaxy feasting on flesh and bone. In one panel, it shows two red lightsaber wielding figures who “saw our power and reaped alongside uusss, working together for the greatest gain.” As you might expect from (what we could assume are) Sith, they betrayed the Drengir. It’s revealed that the Sith trapped the first Drengir in their totems until recently when travelers woke her from her slumber. This is a reference to the events of Claudia Gray’s novel Star Wars: The High Republic: Into the Dark.

Sskeer stares at his fellow Jedi as they are going to be fed upon when we learn he was really under the influence on purpose. He wanted to understand the true nature of the Drengir and their weakness. They rescue the boy from the previous issue. Starlight Beacon is fighting off a Drengir that infected the Hutt carcass they were studying, and to our Jedi’s luck, the Hutt Cartel arrives in premium fashion to take the planet! I didn’t think there could be another cool Hutt design in these comics but this issue proved me wrong!

This is the content I was waiting for. There’s a perfect amount of action balanced with all of the story development we get in this issue. The issue fleshes out Keeve and Sskeer’s relationship, tell the backstory of the Drengir, and reveal that this was Sskeer’s plan, all in the same issue! It got so much done in a pretty short amount of time, and I was impressed! Cavan Scott delivers another very solid issue with something for everyone.

With the stellar cast of characters we have in this High Republic initiative, you can’t develop them all from the get go, but I am hoping that we see more out of Vernestra Rwoh and her padawan in the future. She is from Justina Ireland’s, Star Wars: The High Republic: A Test of Courage. Vernestra is a teenage Jedi who has her own padawan! I hope we see more of those two coming up.

With this being a monthly series, it’s still only been weeks since the battle of Kur (as seen in Charles Soule’s Star Wars: The High Republic: Light of the Jedi) and I really want to know how Sskeer has been doing since then! He even says that there is so much he needs to tell Keeve and I want to know every detail now!