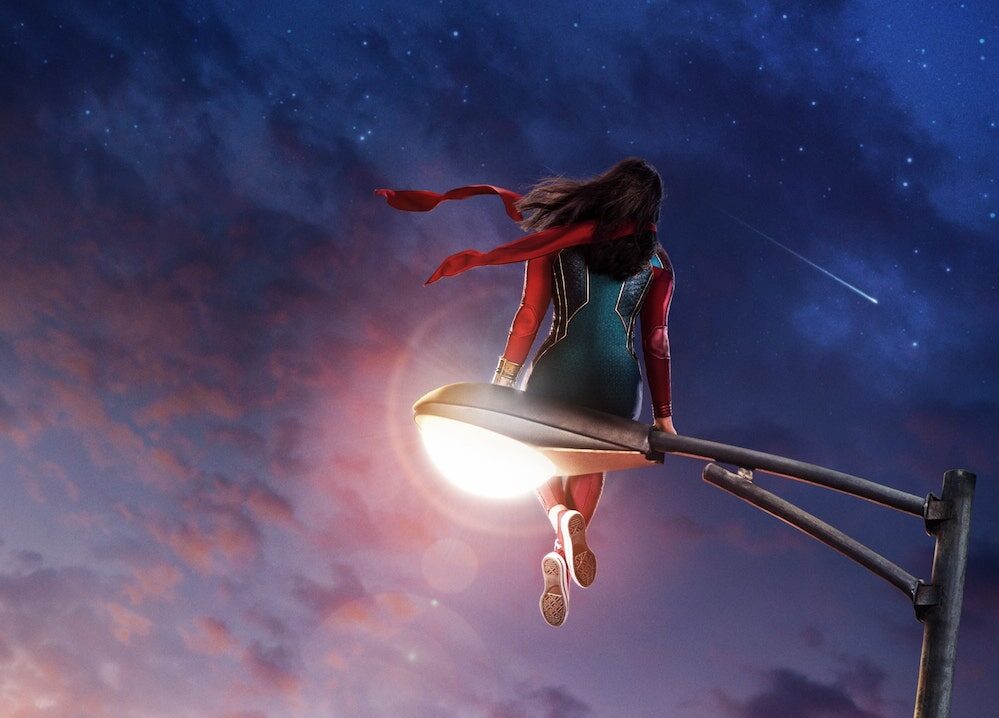 Many fans have labeled Phase Four of the MCU as the “representation phase” and it’s certainly been a very welcome breath of fresh air as we’ve seen a wealth of diverse superheroes introduced in Marvel film and TV projects over the last year. With the arrival of Ms. Marvel, not only do we see the MCU’s first South Asian superhero, but its first Muslim one as well.

In comics, Kamala Khan is one of the most popular and impactful superheroes, and her first collected volume by G. Willow Wilson, Adrian Alphona and Jake Wyatt won a Hugo Award for Best Graphic Story and debuted at #2 on the New York Times best seller list.

The MCU version of the character is not a straight adaptation of the comics, with her powers being the most obvious change. And while the change in powers has been understandably and justifiably controversial amongst many devout fans, it is possible that the story will somewhat bridge the gap before the series concludes.

Beyond her powers, the element of the character that has been faithfully adapted from comics is the sense of joy and wonder that Kamala Khan has. Vellani brings a genuine passion and infectious enthusiasm to the role that is likely to make Ms. Marvel as popular of an addition to the MCU as she has been to the comics.

Ms. Marvel is pure fun and a series that a Marvel household can enjoy together. It shows the kind of range that Marvel is able to display through the Disney+ platform.

This review covers the first two episodes of the six-episode first season. Ms. Marvel premieres exclusively on Disney+ on June 8, 2022!

“Ms. Marvel,” launching on Disney+ on June 8th, 2022, is a new series that introduces Kamala Khan—a 16-year-old Pakistani-American growing up in Jersey City. A great student, an avid gamer and a voracious fan-fiction scribe, she has a special affinity for superheroes, particularly Captain Marvel. But Kamala struggles to fit in at home and at school—that is, until she gets super powers like the heroes she’s always looked up to. Life is easier with super powers, right? Iman Vellani stars as Kamala Khan aka Ms. Marvel; the cast also includes Aramis Knight, Saagar Shaikh, Rish Shah, Zenobia Shroff, Mohan Kapur, Matt Lintz, Yasmeen Fletcher, Laith Naki, Azher Usman, Travina Springer and Nimra Bucha. Episodes are directed by Adil El Arbi & Bilall Fallah, Meera Menon and Sharmeen Obaid-Chinoy.

Iman Vellani is a star. One of the underrated elements of Marvel Studios’ unprecedented success is its uncanny ability, thanks to Sarah Finn Casting, to cast actors who seem born to play their respective roles. From Robert Downy Jr.’s Tony Stark to Chris Evans’ Steve Rogers, and of course the late Chadwick Boseman’s T’Challa, the MCU casting rarely misses. Count Vellani as one of those casting home runs. She embodies the pure joy and enthusiasm that a young superhero like Kamala Khan, inspired by Captain Marvel, should have. Khan is almost a legacy hero, taking her title and inspiration from Carol Danvers, and Vellani displays the kind of passion that one would expect from a teen who lives and breathes in-universe superheroes.

When we meet her, Vellani’s Khan is an awkward high school teen who clearly loves Captain Marvel and her singular goal is to attend AvengerCon (which is also now my singular goal) with her best friend. In doing so, we see her try to navigate through high school, negotiate with her immigrant parents and even work through some romance. Ms. Marvel is a superhero origin story, but it’s also a teen coming of age story that happens to take place in the Marvel universe. As such, if there’s ever been a character that Marvel fans can relate to, it’s Vellani’s Kamala Khan.

Vellani’s smile inducing performance is supported by bright and colorful aesthetics, a perfect supporting cast and a stellar soundtrack.

With apologies to Thor: Ragnarok, Ms. Marvel may very well be the most fun and colorful MCU story yet. The title sequence made up of multiple hand-drawn and colored variations of the Marvel logo, along with multiple instances of comic/anime like aesthetics during the episodes make for an authentic comic book feel for the series. Some of the scenes look like they’ve been ripped directly from the books and put on screen.

The supporting cast is exceptional, with Kamala’s family as the clear standouts. Mohan Kapur and Zenobia Shroff play Kamala’s parents, and Saagar Shaikh plays her brother, Aamir. The quartet make for a delightfully authentic and hilarious family unit. The beauty of the family sequences exist in the mundane. From all four sitting down for a the family dinner, to Kamala trying to speak with her parents while they’re watching TV on the couch, Ms. Marvel is as much of a family dramedy as it is anything else.

In one scene, Kamala’s parents finally agree to allow her to attend AvengerCon…with certain conditions, and the conversation is both hilarious and heartbreaking. In that moment, I remembered my younger self as Kamala and envisioned my older self as Kamala’s father. Head writer Bisha K. Ali, who is British Pakistani, has absolutely nailed the immigrant family dynamic.

Further adding to the fun of the series is it’s masterfully selected music. The broad range of musical genres include samplings of Mase, The Ronettes, Riz Ahmed’s Swet Shop Boys and more. The music perfectly reflects and enhances the story. Like most immigrant experiences, it’s a mix of western and cultural influences.

Ms. Marvel is so much fun and the first two episodes set the tone for a wonderfully unique and endearing superhero story.

From the early marketing, fans of Kamala Khan from the comics have been concerned about the seemingly unnecessary change in powers. The comic book version of Kamala is known for polymorph powers, which allow her to extend her limbs like Mr. Fantastic, Reed Richards, and shape shift (at one point she uses her powers to look like her idol Carol Danvers because she believes that a brown girl isn’t what a hero looks like). The MCU version has changed her powers to appear more cosmic, allowing her to create crystal like objects. In the first two episodes Kamala’s powers are not yet fully defined, and while what we see early on is more akin to powers that Iceman or Green Lantern would have, the seeds are planted for an evolution of her abilities that could very well end up being functionally similar to that of the comics. Whether they will fully go that route remains to be seen, but there does seem to be the potential of a superpowered swerve on the part of the series creators.

It seems clear that Kamala’s powers were adapted to appear more closely related to that of her idol, Carol Danvers, and another member of the upcoming The Marvels family, Monica Rambeau. We know that the trio of heroes will appear together in the upcoming Captain Marvel sequel, and from that perspective, the power change makes some sense.

However, one can’t help but wonder if the power change was both necessary and worthwhile. While Marvel Studios has regularly changed characters as needed (Shang-Chi being one of the best recent examples of a positive change), Kamala is such a well conceived, well developed and beloved character that a characterization that’s closer to the source material might have saved the fans some frustrations.

Beyond the powers, the first two episodes are particularly light on action, and audiences who come into the series expecting the typical Marvel superhero fighting will need to be patient. This isn’t really a negative in my view, as the story and characters are much better served being fully developed before jumping into any conflicts, but it will be interesting to see how much the series will be able to avoid the conventional superhero climactic battle that many expect.

Ms. Marvel is a celebration of Pakistani American culture and a welcome depiction of a South Asian immigrant family that we haven’t seen in the MCU, and is rarely seen in western media in general. As funny as Ms. Marvel is, Kamala’s culture is never mocked, and jokes aren’t made at her culture’s expense. Instead, their family is presented as loving and supportive and I appreciate that kind of normalization in a story as impactful as the MCU. As much as we expect to see Ms. Marvel the superhero develop as the series progresses, I certainly hope that the story and development of Kamala Khan, a teen Muslim Pakistani American trying to figure out her place as a little brown girl in America, isn’t forgotten.

How the series deals with Kamala and her family’s Muslim faith remains to be seen. What’s great is that the show does not seek to sideline or shy away from the fact that Kamala’s faith is an integral part of her story. An early storyline involves her close friend Nakia as the two navigate being young Muslim women becoming more involved in their local Mosque. It has the potential for a positive arc but of course with western media in particular, there is always the danger of putting the Muslim faith in a negative light. These are the pitfalls of representation. Things like culture and faith must not only be represented on screen, but they must be done so carefully, intentionally and authentically. I believe Marvel Studios is up for the challenge but it’s important to pay close attention to South Asian and Pakistani voices as the series progreses.