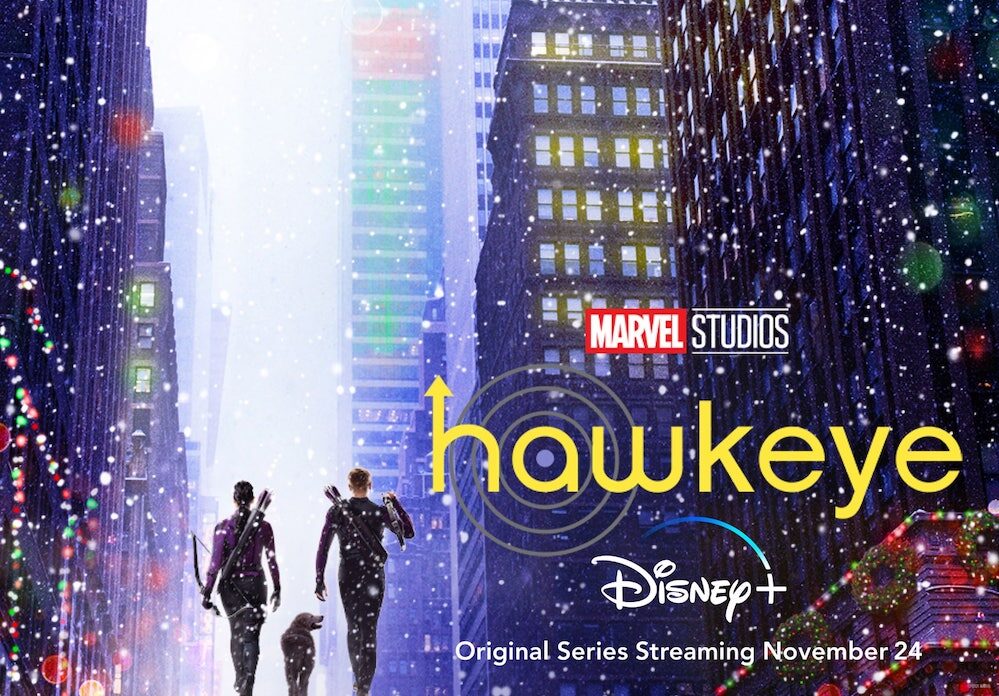 Marvel Studios returns to Disney+ just in time for the holidays with its latest series, Hawkeye, starring Hailee Steinfeld and Jeremy Renner. The series caps off a banner year on Disney+ for fans of the Marvel Cinematic Universe, which started with WandaVision in January and included The Falcon and the Winter Soldier, Loki and What If…?

While the pandemic threw off the original schedule of many of the MCU projects this year, Hawkeye releases at the perfect time, during the holiday season both in universe and in our world, providing a cheery context for the series.

Hawkeye is the most grounded of all the MCU shows, presenting both heroes without superpowers and a relatively pedestrian setting in New York City. In that way, it’s the easiest to connect to, and also the most accessible for casual viewers. Renner continues his decade long performance as Clint Barton, now the grizzled veteran trying to adjust to civilian life after the cosmic events of Avengers: Endgame.

Whether he realizes it or not, he’s preparing to pass the torch to MCU newcomer Hailee Steinfeld, who plays Barton’s protege to be, Kate Bishop. Together, Renner and Steinfeld are an enjoyable duo with strong chemistry that elevates the show. However, based on the first two episodes that were made available for review, the cast of characters around Barton and Bishop aren’t as strong as the two leads and their development, or lack thereof, will greatly determine the overall success of the series.

Hawkeye premieres on Disney+ on November 24th! Light spoilers below!

Marvel Studios’ “Hawkeye” is an original new series set in post-blip New York City where former Avenger Clint Barton aka Hawkeye (Jeremy Renner) has a seemingly simple mission: get back to his family for Christmas. But when a threat from his past shows up, Hawkeye reluctantly teams up with Kate Bishop (Hailee Steinfeld), a 22-year-old skilled archer and his biggest fan, to unravel a criminal conspiracy. The series also features Vera Farmiga, Fra Fee, Tony Dalton, Zahn McClarnon, Brian d’Arcy James and newcomer Alaqua Cox as Maya Lopez. Helmed by Rhys Thomas and directing duo Bert and Bertie, “Hawkeye” debuts exclusively on Disney+ on Nov. 24, 2021.

Admittedly, Clint Barton is not my favorite Avenger in either the MCU or in comics. While at least in comics, his lack of powers his balanced by the standard comic book suspension of disbelief, I’ve always found that suspension to be more challenging in live-action. Now, after surviving Thanos thanks to Black Widow’s sacrifice, we see a much more relatable Barton.

I recognize that I’m crossing the streams here, but back in 2017, DC created a series intended to focus on the regular humans living in a world of superheroes. Although Powerless didn’t quite take off, the premise was an interesting one that Hawkeye seems to adopt with greater success. Barton, the “superhero” without powers is trying to live as normal of a life as possible, surrounded by regular people, including his own children. He’s trying to celebrate Christmas with his family, takes his kids out to dinner and even a musical, Rogers, based on the life of Captain America. In this setting, Barton’s background and experience make him a more interesting character as we know better than his own family the trauma that he’s been through. It’s also emotionally rewarding to see Barton get to spend some time with his kids considering that’s what Natasha Romanoff’s sacrifice was all about.

In particular, what makes Barton so compelling in this series is the journey we’re all anticipating him to go on with newly introduced Kate Bishop. The series does a great job from the beginning establishing Bishop’s character origins, motivations and skills. Unlike Barton, who we met as a fully formed character in Thor, we learn Kate’s sad backstory from the beginning and get an expedited glimpse of how she grew up excelling at archery, martial arts and other relevant skills. The early character development is helpful in establishing Bishop as part of the next generation of Marvel superheroes.

The show takes its time before bringing Kate and Clint together, and when it does, the combination is extremely enjoyable. The two make for a fun pair; neither taking each other or the events around them too seriously, which seems to be the overall tone of the series.

Comic fans will revel in the countless callbacks to the books, including the Tracksuit Mafia, the inevitable villain reveal and of course Lucky the Pizza Dog. The series is strongly inspired by the wildly successful Hawkeye comic run by Matt Fraction and David Aja, and I’m sure fans of that run will be constantly hunting for Easter eggs.

For casual fans, the series is easy to get into without much pre-existing knowledge of the MCU, though there are certainly numerous casual references throughout. After all, they are all living in a post-Blip world, and the show doesn’t shy away from that as evidenced by the thoroughly hilarious and yet crushingly sad performance of Rogers, the Musical.

As strong as Steinfeld and Renner are in their respective roles, the supporting characters introduced in the first two episodes are mostly unmemorable or border on the ridiculous (Clayton English’s Grills being a very welcome exception). The show dances a fine line between charming and cheesy and sometimes it delves too far into the latter. It will be interesting to see how the show strikes that balance as the story progresses and the stakes get higher. Early on, the results are uneven.

Beyond the story, Hawkeye is the first MCU project all year where the visual effects and fight sequences were noticeably underwhelming. I generally am not one to be overly critical of visual effects because often there are countless scenes that are enhanced by CGI that go unnoticed. However, the visual effects very early in the first episode of the series, that connects the show to the original Avengers film, looked jarringly bad. While I appreciated the reference to the film as it relates to Kate’s origin story, the execution was surprisingly lacking. It looked much more like something you might see on an amusement park ride rather than an MCU project.

Perhaps more concerning was the fight choreography involving Bishop. Primarily fighting low level street thugs, the hand-to-hand combat looked stiff and over rehearsed. While I wasn’t expecting Shang-Chi levels of combat, the sequences were simply unconvincing. I hope as Kate develops into a full fledged superhero, the fight scenes improve beyond the Netflix level of quality we see early on.

Fans have long been eager for the official introduction of Hailee Steinfeld into the Marvel Cinematic Universe for a variety of reasons. First, she’s extremely talented and very likable. Further, in line with the thrillingly diverse Phase Four era of the MCU, Steinfeld’s father is of Ashkenazi Jewish descent and her mother is Filipino, African-American, British Isles, and German. In addition to Steinfeld, the series is set to introduce Alaqua Cox as Maya Lopez, otherwise known as the deaf, Native American superhero Echo. Cox will later go on to star in her own Disney+ series in 2022.