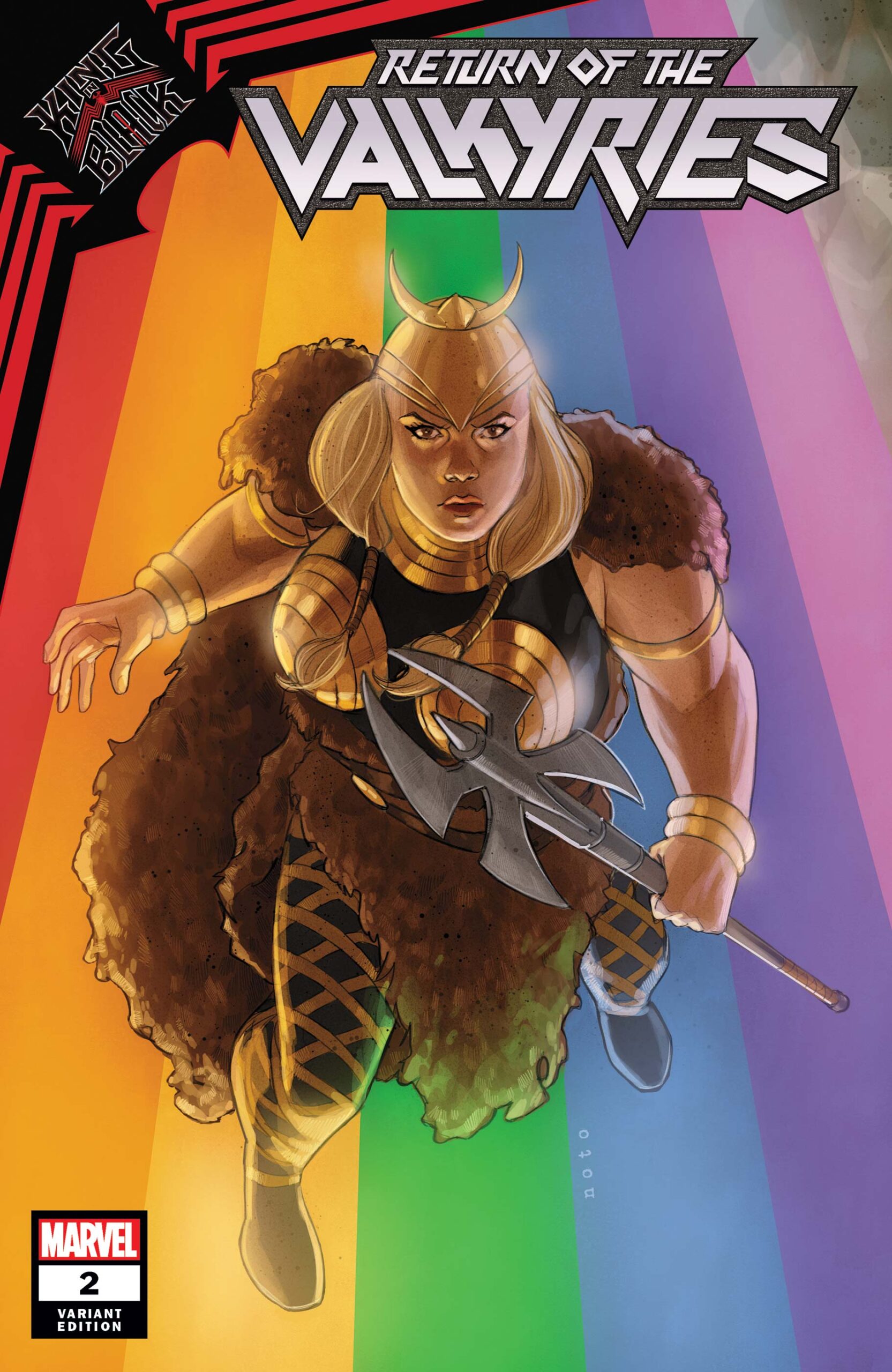 Valkyrie, Dr. Jane Foster, and a few former ones (including Dani Moonstar) are attempting to navigate a havoc-filled world with Knull, the God of the Symbiotes, trying to take over. With everyone powerless to stop him, the Valkyries hope to help turn the tide.

King in Black: Return of the Valkyries #2 is available now at your local comic book shop. Spoilers below!

SAVE THE SENTRY – SAVE THE VALKYRIES – SAVE THE EARTH! Knull and his symbiote horrors have come to Earth, and now all Jane Foster sees when she looks at that big blue globe…is a vision of death. Most of Earth’s heroes are locked in battle on the ground, and it’s up to Jane and the Sentry to protect the rest! But Knull’s power has spread over the galaxy and infected creatures even older than the gods…and it may not matter how many Valkyries Jane can bring to their aid.

After a failed attempt to rescue Sentry from a headless Celestial, Jane Foster is back in Valhalla. There, Jane, Brunnhilde, and a mysterious Valkyrie must figure out what exactly is going on. In the meantime, former Valkyrie, Dani Moonstar, is back on Earth fighting one of Knull’s creatures. Despite being in different places, all of them are fighting the same foe and wish to destroy him. However, this is easier said than done. With most of the superheroes trapped on earth, trying to fight Knull, all Jane sees is death. This time, it might not matter how many Valkyries Jane brings with her as Knull’s power has spread across the galaxy – infecting beings older than the gods themselves.

The story is segmented in a way that gives shine to Dr. Jane Foster and her fellow Valkyries in Valhalla and to Dani Moonstar back on earth. It’s very much a back-and-forth story through these different spaces and it just flows so well. While Dani is dealing with her own nightmarish fight on earth, Jane, the new mystery Valkyrie and Brunnhilde are going through their own struggles. Jane is trying to figure out the best way to aid Earth and the galaxy while also attempting to get the newly discovered Valkyrie to assist her. There is nothing easy about their mission and it seems there is no way for them to secure the win without a great cost. Such is the job of a hero most of the time.

The majority of issue two revolves around the conversations happening between all of the characters. Whether it is the character’s internal thoughts or various characters interacting, everything meshes together effortlessly. My personal favourite moments were those with Dani. “I know that the people who only see spiders in their nightmares are the lucky ones.” The way in which she picks apart the nightmarishness of Knull’s creatures and their effect on the victims builds up the dread and unease.  Much like the visuals of the symbiotes taking over every inch, which you can see vividly in Vakueva’s art as they coat the outsides of buildings and attack citizens.

Another plus is that we get to learn more about our new Valkyrie comrade. Still mysterious, this book has peeled away some of the layers of the character, including the fact that she’s looking for her weapon that she believed to be lost. We again see the vulnerability that lies within and the guilt she feels in not being able to save her love, a fellow Valkyrie.

While I did enjoy how the story was being set up, if you were looking for high-octane action, you won’t find much of it in this issue. There are a few moments peppered within the comic. But as a whole, it is not very action-heavy. Although this is not necessarily a bad thing, and in fact, wasn’t something that bothered me, I think it could be something that others could see as a sore spot for issue two. Aside from that, there isn’t anything else that one might linger on or refer to as “bad”.

Everything about this series is leading somewhere important, so perhaps the cliffhanger ending could be seen as a point of contention. However, that is simply because I personally wanted to read a lot more. The better the book, the shorter it seems, unfortunately. But if you’re a comic reader, this is most definitely not something that would be new territory to you.

In this article:King in Black, KinginBlack, Marvel, Marvel Comics, MarvelComics, Return of the Valkyries, ReturnoftheValkyries, Review