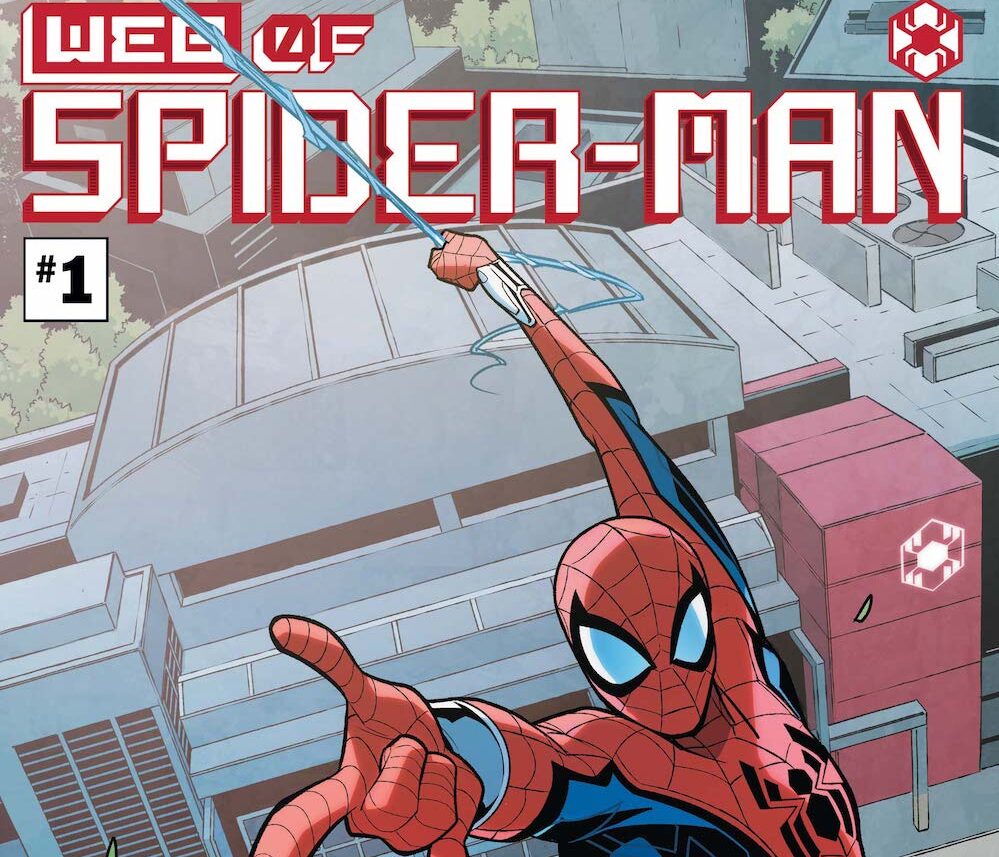 Welcome to W.E.B. of Spider-Man issue one! W.E.B. is one of many teams and facilities being set up by the Avengers to inspire new recruits to step up and be part of something bigger. Of course W.E.B. is specifically formed by none other than our favorite S.T.E.M. hero Tony Stark, a.k.a. Iron Man.

W.E.B. of Spider-Man #1 is available now at your local comic book shop! Spoilers below!

Writer: Kevin Shinick
Penciler: Alberto Alburquerque
Cover Artist: G Gurihiru
Peter Parker. Spider-Man. Scientist. Troublemaker? Thanks to none other than Tony Stark, a new scientific research station for the teenage heroes of the Marvel Universe has just been completed – and Spider-Man just got an invitation to join! Working alongside some of your favorite faces from the MU and a whole bunch of awesome new gadgets, and with Iron Man keeping an eye on the them, surely everything’s going to go great for the heroes, right? – Right? Face front, True Believers, and treat yourself to this first issue in an adventure of the WORLDWIDE ENGINEERING BRIGADE!

W.E.B. is an acronym that stands for Worldwide Engineering Brigade, and the roster is already loaded with some very smart youths from around the world. The issue starts with the de facto leader, Peter Parker/ Spider-Man, monologuing about his passion for science as he handles business by defeating run of the mill thugs and gifting them to police. We are also reminded of another life lesson from Uncle Ben as he is monologuing. This lesson is resounding as Peter finishes up and heads to the facility with the idea that he can use this chance to establish Peter Parker as an individual independent of Spider-man; which backfires almost immediately as he approaches the main entrance.

Parker is greeted by a Spider Bot that recognizes him as Spider-Man. Also it probably doesn’t help that the building has a giant spider as its brand logo. I personally like this idea, as Parker is one of the smartest people in Marvel Comics, but his brilliance is almost always seconded to his obviously powerful alter ego. After the initial awkward introduction, we head inside to meet the rest of the team which has already made themselves at home.

Harley Keener, Lunella Lafayette (Moon Girl), Onome, and Squirrel Girl round out the squad along with…Peter Parker as himself. We quickly get into the normal shenanigans that heroes get into, but instead of throwing punches, these brainiacs flex their grey matter onto each other. As usual, this all leads to the teams first encounter, which pits them against an enemy that shouldn’t be a problem but becomes one as they fail to work together.

Ultimately Spider-Man does make his much needed appearance, but they are doing the old switcheroo (ugh!!!). I really do not like this, and I hope that they move away from the Clark Kent/Superman style transition. Let us hope that this series will allow the mind of Peter Parker to become his true identity.

There is another issue I have with this first offering and that is Onome’s cell phone “power blast.”I understand that the world is becoming dependent on technology to the point that we all start to panic if we lose access for even the shortest amount of time, but y’all need to put some respect on Wakanda and their exports! I know next to nothing of this character but I am sure that she can do better than having a containment beam fire from her phone’s camera lens. Or maybe that is the flex?

Overall, I am excited to see what this series brings, and of course I have already bounced the idea of this being adapted, at the very least, as an animated show. If you feel like picking up a science/tech based series with the added sprinkle of the egos that come with being brilliant, then this is the series for you.

Les Gonzalez has been reading comics since he was ten years old, but his passion was truly rekindled by the live-action films. His favorite characters include X-Men, Hulk and many more.