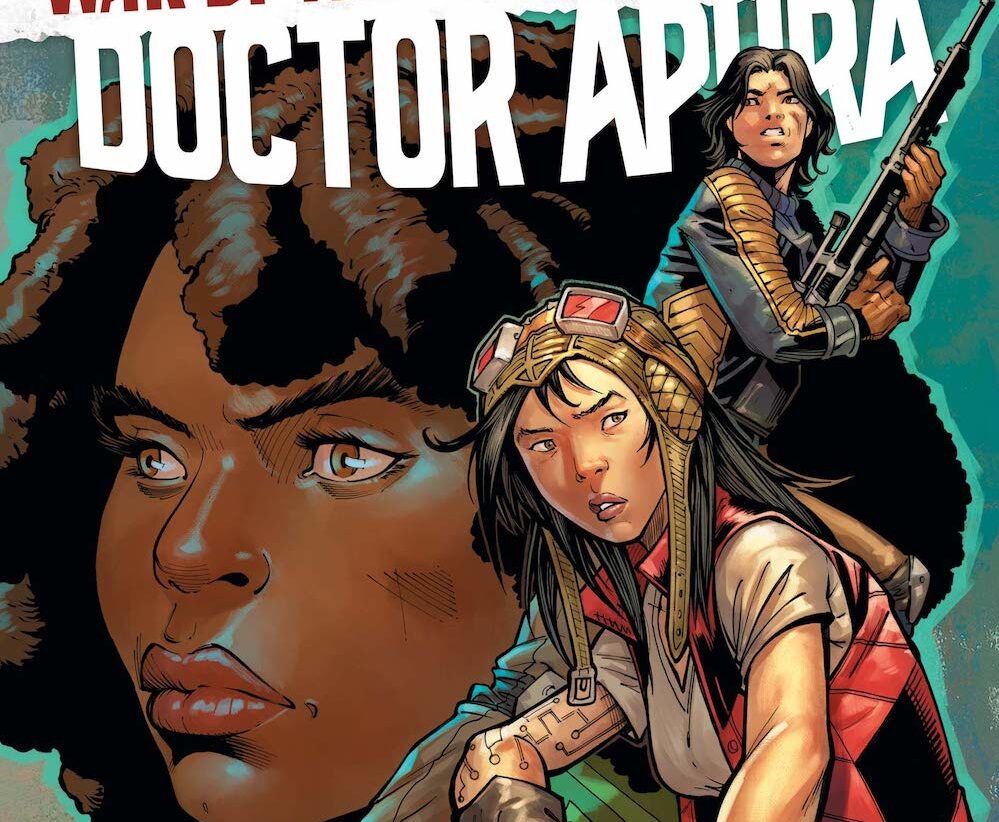 Marvel Comics’ Star Wars: Doctor Aphra #10 delivers one of the best of the “War of the Bounty Hunters” preludes. It wraps up Aphra’s current predicament in the most Aphra way possible, with a mysterious ending to keep us hooked. June 2nd cannot come fast enough!

Writer: Alyssa Wong
Penciler: Ray-Anthony Height
Cover Artist: Joshua “Sway” Swaby
PRELUDE TO WAR OF THE BOUNTY HUNTERS: “”THE INVITATION”” DOCTOR APHRA and SANA STARROS find themselves cornered by VUKORAH and the UNBROKEN CLAN! Can they pull off a daring escape–even if that means surrendering the NIHIL HYPERDRIVE? And what sets them on a collision course with one of the most deadly BOUNTY HUNTERS in the galaxy?

Diffuse a hostage situation and save lives, or run the other way? Aphra manages to diffuse the path engine, but takes a piece for herself to give to Domina. It took a little convincing by Sana, but Aphra ultimately decides to prevent the path engine from exploding. General Vukorah is forcing the hostage engineers to make the path engine operational, but Aphra discovers that the engine is a fake, and it would only explode if they tried to use it.

Aphra promises general Vukorah that she can fix the path engine, and but her time is up and Stormtroopers rush the room to save the prisoners and a fight ensues. Amidst the chaos, Aphra steals the core, but a stray bullet hits the ship and causes an explosion. Sana and Aphra escape in the chaos. Upon meeting Domina Tagge, she is very mad that the path engine was blown to pieces; Aphra did not complete the job Domina hired her for. Domina puts Sana into a containment field, suffocating her. Aphra reveals she has the core of the original path engine, and Domina accepts it, letting Sana live. She decides to give Aphra another chance, having her go meet an associate who has an “incredible opportunity.”

One of the best things about this series is that we have no legacy characters in the forefront, so anything can happen. I actually worry for Aphra and Sana’s life constantly. Both of their stories are being developed in real time and we don’t know how it ends, unlike say Han Solo, or Padme Amidala. This, combined with writer Alyssa Wong’s incredible pacing and suspense, makes compelling content. Not to mention that the Stormtroopers look really cool  in Ray-Anthony Height’s art style.

After Aphra hands over the path engine core, Sana tells her: “You gave the head of an evil corporation a piece of important nihil tech.” And Aphra responds, “Ehhh, all corporations are evil. No need to get worked up about it.” The real world commentary we get in this series is great; gotta love the shade.

I really want to know more about what Aphra’s family is currently up to, especially her ex, Tolvan. Aphra and Tolvan are such a great pair, I’m hoping we can see more from them soon.