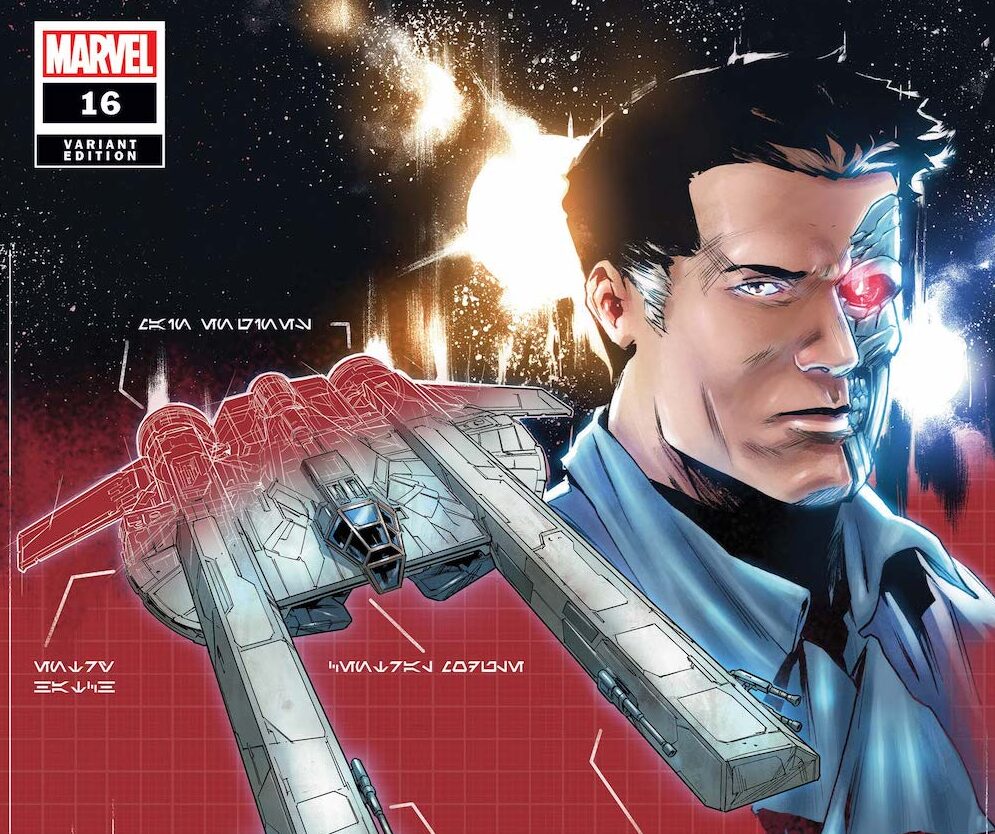 Valance joins the War of the Bounty Hunters and new alliances form, as battles wage across the crossover. T’onga is close to finding Cadeliah, the heir of the Unbroken Clan and Mourner’s Wail, and she could unite the Underworld…if Crimson Dawn doesn’t find her first.

Valance sends a transmission to Kondra, asking him to look after Cadeliah. After, he and Dengar finally arrive on Jekara to save Han Solo. This issue takes place alongside War of the Bounty Hunters #4; even having some of the same scenes while adding the points of view of the other characters and setting up the final issue of this crossover. Boba Fett fights both Valance and Dengar, taking Dengar out of the fight by trapping him on an ice block in the water. Valance and Fett then make a deal to work together and save Solo. Fett tells Valance he made the right call and that Dengar would have betrayed him first. Which, in the next page, Dengar says himself. As Dengar is about to be eaten by a monster, Deathstick blasts it with a cannon, saving him. This is when we learn the deal these two made in the last issue on Canto Bight. Dengar gives her the location of the Rebel base where they are hiding Cadeliah, the heir to two powerful crime syndicates. Valance and Dengar both betray one another in this issue; can’t trust a bounty hunter!

I really enjoyed seeing scenes from War of the Bounty Hunter #4 depicted again in this art style, along with the additions of different points of view. For example, when Dengar is stalling Fett, in the other issue we see their conversation, but here we just see Valance curious what they’re talking about. Similarly, when Dengar is separated from Valance, we don’t see their full conversation, we see it from Dengar’s point of view, waiting, and they just leave him there.

The art in this issue is really great at the landscapes and the details of the planet. The colors really pop and Boba’s armor and Crimson Dawn’s ships look so elegant.

In the second page, T’onga is trying to find Valance with the crew she put together in the last issue, and Zuckuss is doing the tracking. It looks like Zuckuss is using the Force and it feels almost magical, but in reality he just had a hidden tracker on Dengar’s ship. I found that hilarious.

Deathstick. Anything with a Deathstick appearance is just the best, I’m so happy they brought her in for this event and hope we get a lot more of her going forward.

My only nitpick with this issue is that I hope T’onga and crew can have more to do in the next issue! This issue, they are following Valance around. It’s understandable, given the amount of things going on, but in previous issues the action with her and Losha was so great that I’m excited to see more from them in the future. It seems she might be the lead of this series soon, and while I’m anxiously hoping Valance doesn’t go, I look forward to seeing T’onga’s adventures.