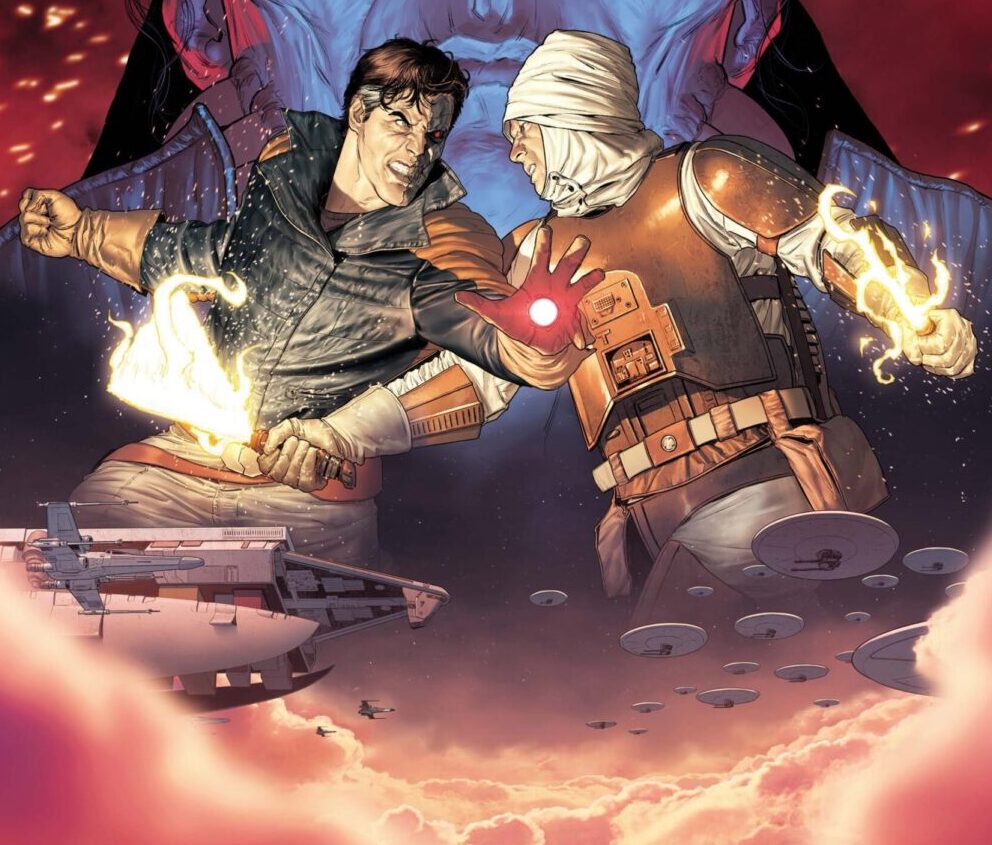 Marvel’s Star Wars: Bounty Hunters #10 is an exciting story with several moving parts. It features an appearance by one of the most beloved Star Wars characters of all time, and sets up some pieces for the upcoming War of the Bounty Hunters storyline, which is sure to be a hit with fans.

Writer: Ethan Sacks
Penciler: Paolo Villanelli
Cover Artist: Mattia De Iulis
THE TERMINUS GAUNTLET CONCLUDES! VALANCE finds himself alone and outgunned against the dreaded NEW OHNAKA PIRATE GANG! The lives of the crew of a REBEL transport hang in the balance as he battles against grave odds. And what secret is DENGAR carrying that will upend Valance’s life?

This issue kept me on the edge of my seat. Valance helps the rebels trapped by the Ohnaka Gang. Valance takes the members out one by one, which was very compelling. There’s one point where he throws something to distract two members, then appears from the darkness behind them. It was a cool scene reminiscent of a thriller film, and with that glowing eye and cybernetic face, Valance looks extra cool while doing it.

It’s interesting to see the different things he can do since he has cybernetics. In the beginning of the issue, he’s on the outside of the Rebel ship, and like an R2-D2 astromech droid, he plugs into it to let him in. There’s also a flashback early on with my favorite character (Han Solo), and I may or may not ship Valance and Han after one of the specific exchanges that they shared in the issue. This is setting up the “War of the Bounty Hunters” by establishing Valance’s past relationship with Han, and his guilt for never having thanked Han for saving his life.

Following her near death experience, T’onga realizes she can’t get revenge for the death of her brother without her partner Losha. When T’onga expresses as much, Losha answers with a kiss. I must say, I never understood responding to a conversation with a kiss, which happens all the time in media, until it was made gay. It all makes sense now.

Dengar revealed to Valance that Boba Fett has Han Solo, and as T’onga wants revenge on Fett for the death of her brother. This might be setting up the “War of the Bounty Hunters” that is coming in May. Plus Valance fighting to save Han will do so much for the inner shipper in me.

This series has a lot of moving pieces, which leads to some really cool storytelling, but unless you’re binging the series in one go, it might be difficult to remember who all the characters are and what they’re doing. Nonetheless, I appreciate having a lot going on in the story. It’s fun to talk about stories like these with my friends who can remind me of certain things as we discuss the comic.