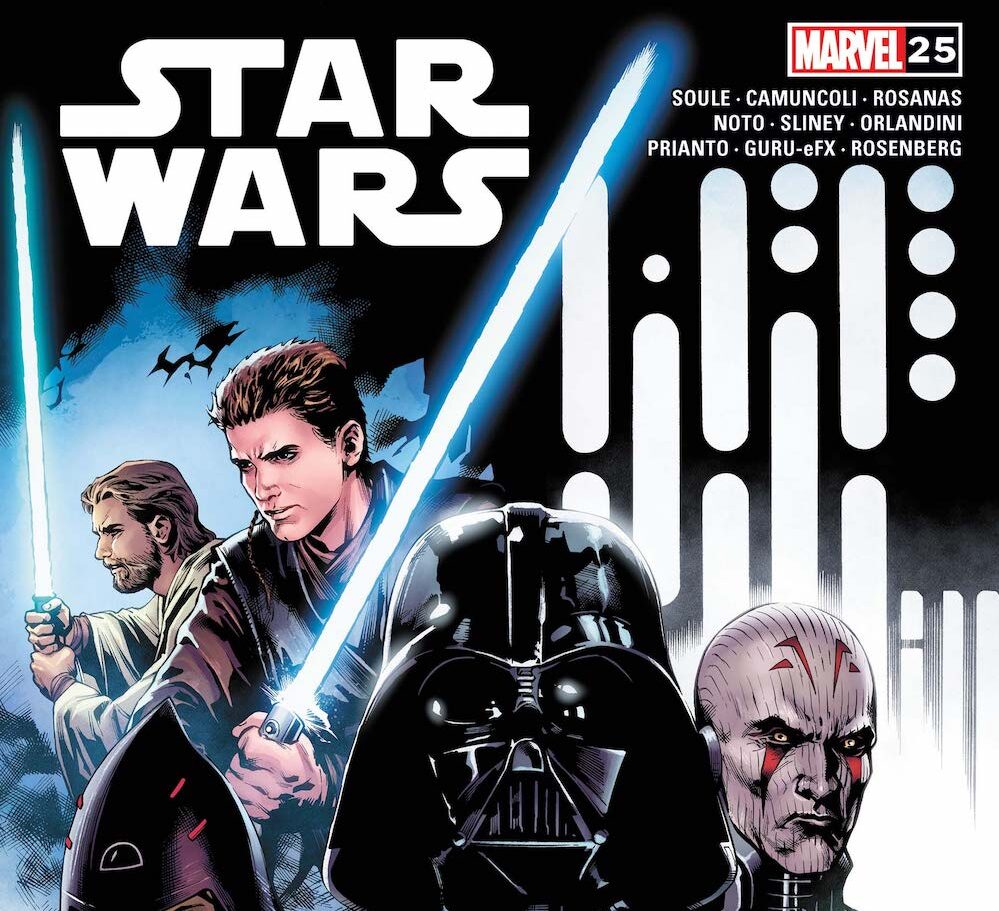 Charles Soule’s 100th Star Wars comic is here! Over the last seven years, Charles Soule has written in virtually every era of the galaxy far far away – from the High Republic to the sequel trilogy era. This issue revisits some of the characters he has written in that time. I am a huge fan of Soule’s work, especially his Darth Vader and Poe Dameron runs, making this issue a highly anticipated issue for me.

Star Wars #25 is available now at your local comic book shop! Some spoilers below!

REVIEW – A Celebration of Soule

I really enjoyed that we got a story in each era from the prequel films to right after The Rise of Skywalker. There are two stories, both titled “The Lesson,” with one telling the story of Anakin Skywalker learning from Obi-Wan Kenobi about why the lightsaber is the weapon of a Jedi, and the other telling the story of Darth Vader learning what a lightsaber means to the Sith. I found it really interesting to see the difference in not only their perspectives, but in the way the art by Ramon Rosanas for the Jedi and Giuseppe Camuncoli for the Sith contrasted. For Anakin and Obi-Wan dueling in the Jedi temple, it is very pretty and peaceful. Meanwhile, Vader and Sidious are in a dilapidated part of Coruscant. While their scenes don’t have elegant scenery, the art and especially the colors are stunning. In particular the red lighting and the backdrop of this part of Coruscant popped. The Vader story was my favorite in the book art-wise, meanwhile Poe Dameron’s “A Eulogy for Snap” had my favorite story of the four.

In “A Eulogy for Snap” fans will remember Temmin “Snap” Wexley from the sequel trilogy, but he was also a prominent character from the Aftermath book trilogy and Soule’s Poe Dameron series. Because of those books, I came to love the character, and his (spoilers!) death in The Rise of Skywalker really stung! In this story, it was great to finally see Black Squadron members react to his death and pay respects to him all these years later. In the years since the film, I had forgotten that he and Karé Kun got married, so this story really had me in my feelings all around and it felt like a gut punch when I remembered. I have a lot of love and nostalgia for the Poe comic, so I also really enjoyed seeing the distinct art style from Phil Noto return.

While I really enjoyed revisiting these characters, overall the stories didn’t have much to add to the overall Star Wars universe of stories, and the issue could have benefited from being longer. The Vader and Kylo stories in particular would have been great with more pages. The Obi-Wan & Anakin and Poe Dameron stories did enough for me, but even then, if each story was longer that might have helped the comic have more impact as a whole.