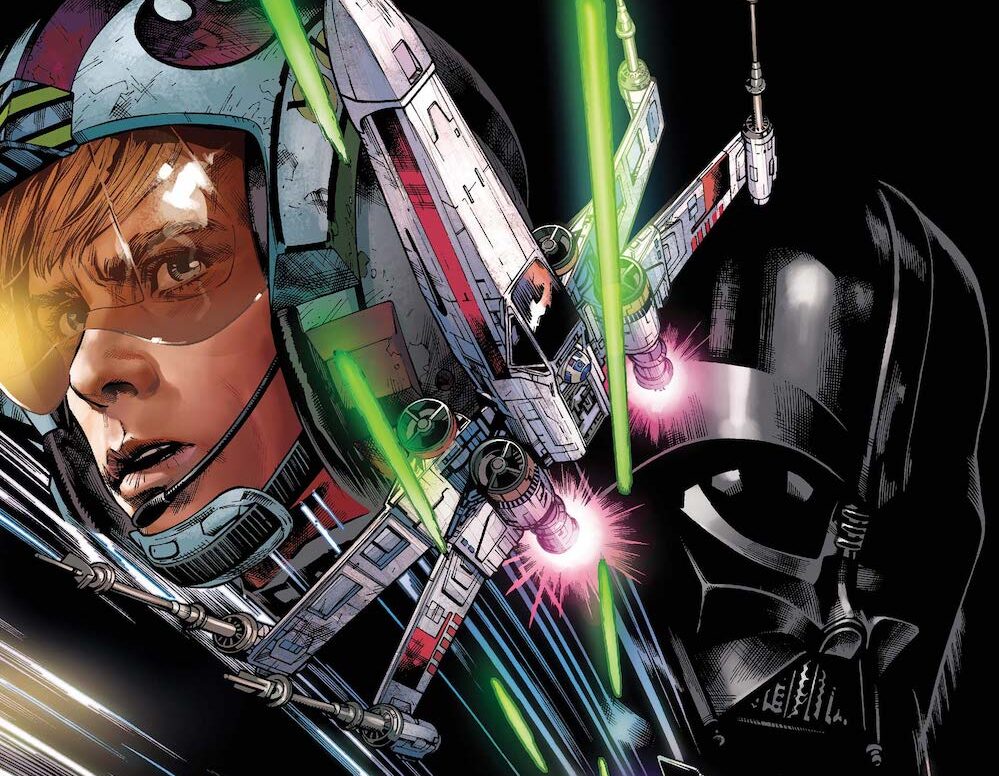 While Vader is engaged in a dogfight with Luke Skywalker, the Millennium Falcon is stuck, inches away from Han Solo. Can Leia, Lando, and Chewbacca reach Solo before the Hutts do? Read this touching, character driven issue to find out!

Writer: Charles Soule
Penciler: Ramon Rosanas
Cover Artist: Carlo Pagulayan
“THE CHASE!” SITH LORD DARTH VADER has discovered that his son, Jedi Knight LUKE SKYWALKER, is finally within striking distance. He will pursue him to the very ends of space…Who is hunting whom? Meanwhile, LEIA ORGANA battles the forces of CRIMSON DAWN to regain her lost love, HAN SOLO.

The issue follows up on War of the Bounty Hunters #4 with the Millenium Falcon and the Imperial shuttle housing Han Solo without power, thanks to Boba Fett. Vader is chasing Luke Skywalker, in what was the probably coolest dogfight I’ve ever seen in a Star Wars comic. Luke is pondering where Vader could be when Vader flies out of the sea underneath Luke’s X-Wing. Luke is chased for a while when he notices the water from the sea froze upon rising because of how cold the planet is. He uses this to lead Vader into a wave of ice Luke created, stranding Vader on the planet.  In the space above the planet, Lando gets to work on the Millennium Falcon’s reactor, so they can run diagnostics on the ship. After this, Vader ends up back on Luke’s tail, and Leia sells Lando on joining the rebellion.

Environmental factors aiding in a fight is my favorite thing in Star Wars, like the lava on Mustafar during the lightsaber battle in Revenge of the Sith, or the closing doors that keep Obi-Wan behind the fight in The Phantom Menace. In this issue, I thought it was really creative to use the climate of Jekara as a factor to give Luke the upper hand against Vader! When Luke makes Vader crashland, there’s a tense moment where he ponders shooting at the Dark Lord, but decides against it. It highlights Luke’s growth, he’s becoming more Jedi-like.

As Lando goes into the ship for repairs, he refers to her (the Falcon) as an old friend. I was thinking of L3 and was already in my feelings, and then he proceeded to apologize to her for a whole page. It was a touching moment.

Leia also has some words of wisdom, that sometimes she has to sit and wait when there are times she just can’t help with something. “If there’s nothing I can do– I just have to wait.”

I have no significant nitpicks with this issue because of the crossover. These tie-in issues have been getting a lot done for the characters while also not moving forward the story too much, so I can’t criticize that. Even then, this issue works well enough that it doesn’t feel restrained by the crossover event.