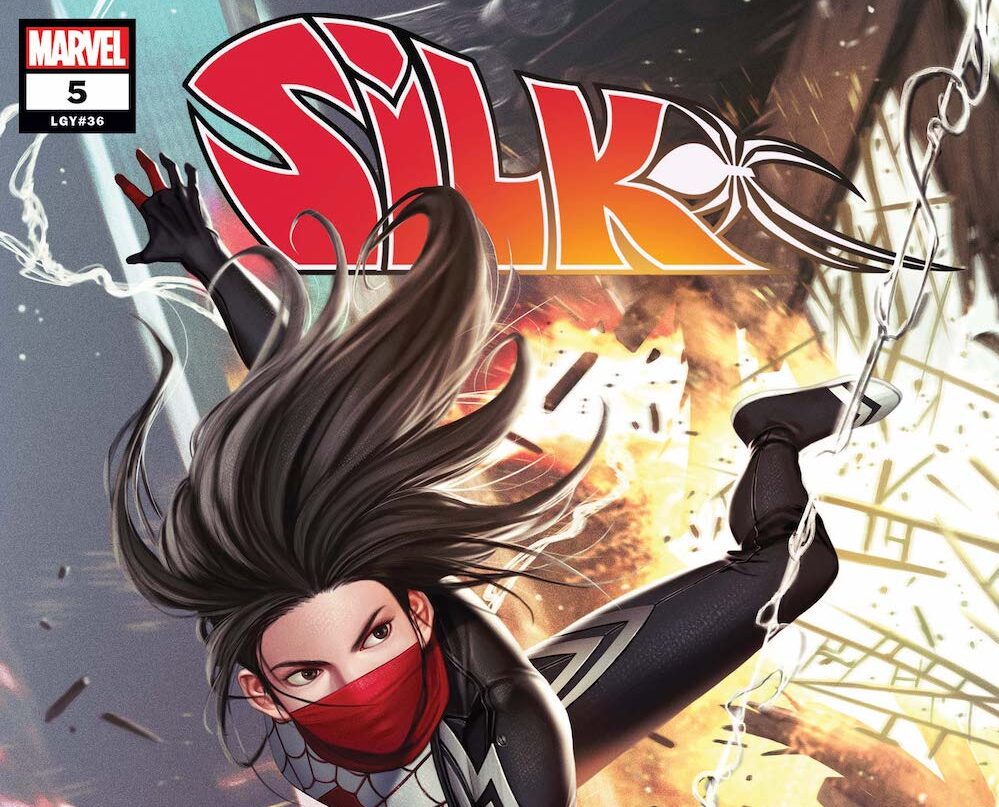 This current run is my first time reading a Silk series and it has been one of my favorite reads of the year. Silk #5 concludes the current storyline centered around Cindy Moon and the battle against a 400-year-old Korean witch fueled by worship energy.

Silk #5 is available now at your local comic book shop! Minor spoilers ahead!

Writer: Emily Kim
Penciler: Takeshi Miyazawa
Cover Artist: In-Hyuk Lee
TIME’S UP! Silk has tried and failed to stop an evil witch from terrorizing New York. Now the witch is putting her grand plan into motion. What IS the witch’s plan? And what’ll happen to the city – and the world – if Silk is too late?!

REVIEW – Silk’s Success and Sense of Self

While the witch has been the main antagonist of the run thus far, Silk #5 shows that she’s just a catalyst that helps Cindy Moon in her journey to self-discovery. The witch storyline and all the other smaller narratives presented in the first four issues of this run are all addressed well enough in this fifth issue.

Throughout the series, Moon has been facing internal struggles about her identity and sense of self. She has expressed her troubles with adapting to the modern world, essentially feeling like a woman-out-of-time because of the decade she spent locked in a bunker. She also has questions about her Korean heritage and what that means to her.

We see how Moon versus the witch plays out. We see how Silk comes to terms with who she is and how she is going to approach living in this time. We see her address the relationships that have been featured in the run. We see her find acceptance with herself and her life. And, we see her embrace the room for growth she has been presented with.

However, as a whole, the issue felt a bit underwhelming and anticlimactic as a conclusion.

The issue opens with the battle against the witch. Moon, having had her youth stolen from her by the witch, has the strength and appearance of an elderly woman. While she still has her powers, they are much less effective given her diminished state. The focus is more so on how Silk is going to resolve her situation, but it could have spent more time on what the witch wanted to accomplish in order to elevate the stakes.

The internal monologue and dialogue from Silk is really well done. It captures the essence of her hesitation but also her ultimate confidence and desire to do good. The writing lives up to the quippy banter expected of her and feels true to the character.

From a visual perspective, the use of colors is really intriguing. The panels for the battle scenes primarily utilize a muted yellow hue, a blue, or a calm green tone as the backdrop. These different colors help distinguish the varying perspectives of the characters, where the control of the situation lies and when there’s a shift in the fight.

After Silk’s victory, the scenes begin to feature more vibrant shades. She doesn’t feel as unsure about her work, family, or social life. These more lively tones help to highlight Moon’s heightened confidence and comfort with herself, where her life is — and where it’s headed.