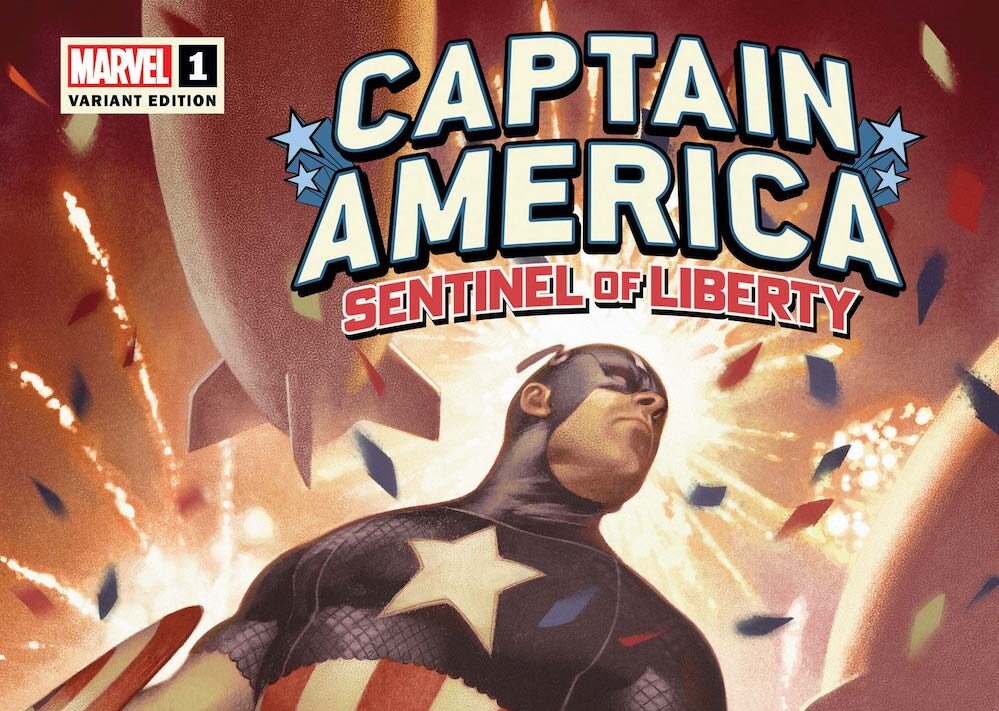 Although Sam Wilson is currently the primary Captain America in comics, Steve Rogers still holds the mantle as well. He’s still a star-spangled man with a plan — shield, suit, and all. They just aren’t a part of his daily wardrobe. Rogers has given up the glamor of superheroism. His plan now? Rediscover how to be an everyday American. That is, until a new threat prompts him to bring the shield and suit out for the heroic purpose of protecting the innocent and stopping evil.

Captain America: Sentinel of Liberty #1 is available now at your local comic book shop! Spoilers ahead!

Writer: Collin Kelly, Jackson Lanzing
Penciler: Carmen Carnero
“The shield isn’t what you think. It’s not your symbol. It’s theirs.” The shield is one of the most iconic images in the world. It stands for hope, justice and the protection of the innocent. It also holds a secret, undiscovered until now, that will change the way Steve Rogers views the 20th century…and how he chooses to fight in the 21st. Nothing is what it appears in this game-changing Captain America run by Jackson Lanzing and Collin Kelly (KANG THE CONQUEROR) and Stormbreaker Carmen Carnero (MILES MORALES: SPIDER-MAN, CAPTAIN MARVEL, STAR).

From war and friendship to love and devastation, the issue opens with an intriguing use of parallelism from Steve Rogers. His words highlight what he knows and what these ideas can do to and for people, also offering a contrast to the vast unknown he still deals with despite his age.

The opening words are complemented by a visually stunning spread. The scene features a full body portrait of Rogers in the center with concentric circles in the background. They come in shades of red, blue, and gray. Each shape offers glimpses at different points of and various key figures in his life. It’s an appropriate and creative way to mark the character’s new beginning while paying homage to his history.

Interestingly enough, this new start means going back to his first start. Leaving behind the prestige that came with being the main Cap, Rogers moves into the old, worn-out Lower East Side Manhattan apartment where he grew up. Why? Because it’s home, the place where he belongs—a testament to how he’s staying true to himself.

Everyday life now includes morning jogs where he shows the shield off for those it belongs to (all of them), a life drawing class at his local community college, hanging out with friends he made at school, or teaching the young boy in his building how to stand up for and protect himself.

But he’s still Captain America. He still has enemies, and he still has that desire to stop evil and stand up for what’s right. So when a problem emerges, there’s no hesitance to bring his suit back out.

Rogers may be a natural leader, but he achieves success with the help of others; with the help of his team. Nowadays, that doesn’t mean the Avengers, but rather his friends from class. They help him uncover a mysterious message that turns out to be a terrorist threat. While the result of the cooperative effort unveils an unfortunate event, seeing Rogers seek and receive help from his new “normal,” everyday peers is endearing.

When it comes to the conflict, the narrative gets a bit underwhelming. Not much more is revealed regarding the shield’s dark past and true symbolic meaning — something mentioned in the book’s synopsis.

There is an interesting use of light with the shield throughout the issue. To start, the shield is often met with bright lights flaring off the object. It looks good and shiny even if it’s not in pristine condition. The lights help evoke positive emotions — ones of hope and confidence. But, come the end of the issue, the shield is met with darker, duller shades, and it doesn’t appear to be that way simply because of the nighttime setting.

The shield mystery does leave enough intrigue to keep the reader engaged, though. It’s especially effective with Bucky Barnes’ last scene, because he seems to know more than he’s letting on. As a whole, Captain America: Sentinel of Liberty #1 captures the true essence of Steve Rogers. It doesn’t highlight the super soldier; it highlights the genuinely good guy who just happens to be a man-out-of-time with enhanced abilities. That’s what makes this first issue a great read for Captain America fans. We aren’t fans because of some title or set of superpowers, we’re fans because of Rogers as a character.