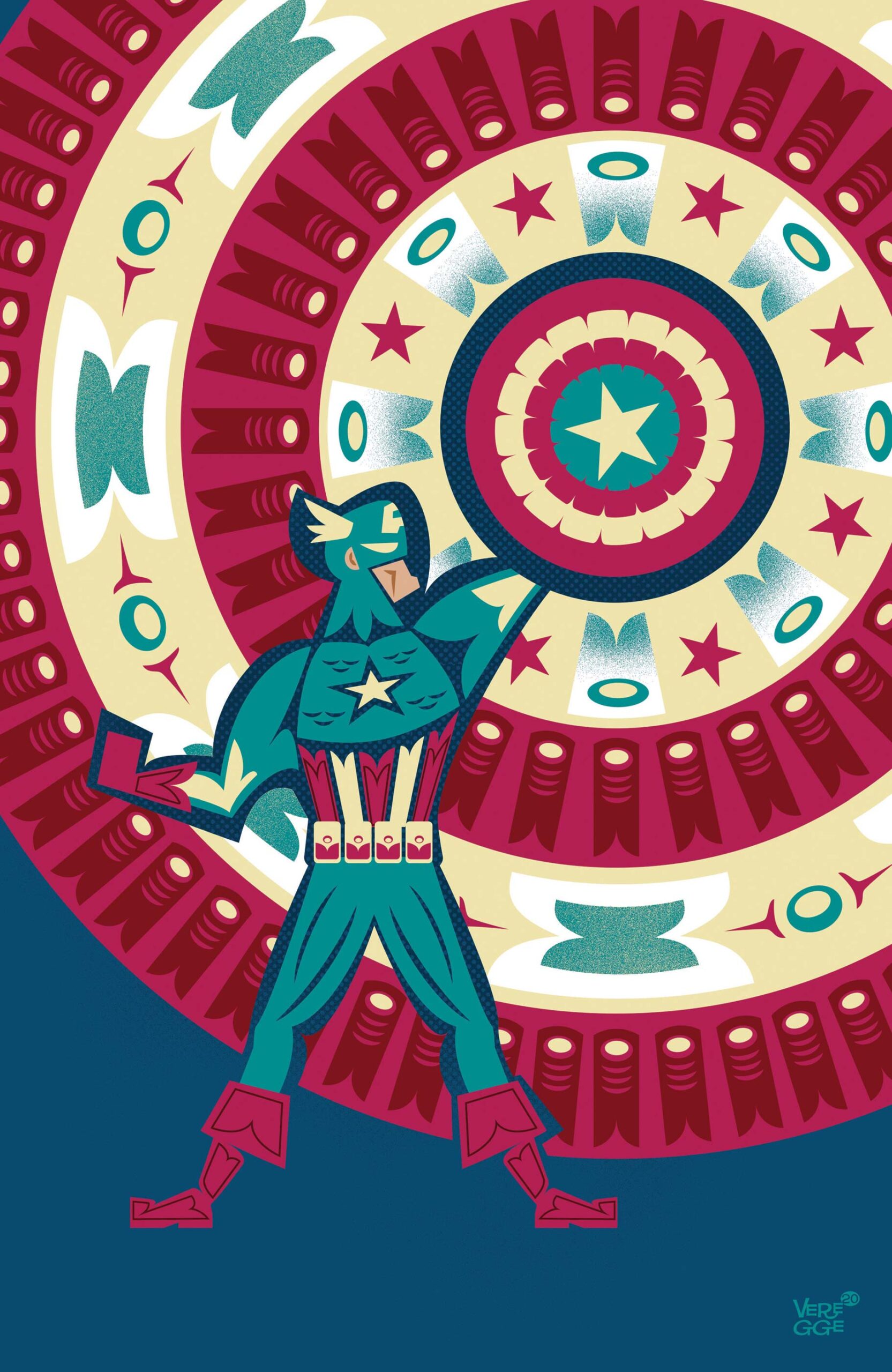 Captain America, Sharon Carter (Agent 13), Bucky and Falcon set off on a rescue mission to save the Daughters of Liberty. This issue felt like a bridge issue, setting up the pieces for the upcoming larger confrontation. Sharon Carter gets the splotight here, with her internal narrative driving the story, and the focus being on her and her aunt Peggy Carter. Writer Ta-Nehisi Coates, who is also writing Black Panther, has had a very strong Captain America run thus far and I don’t know if it’s being talked about enough what a bold move it was by Marvel to have Coates take over this book.

As much as I love Coates’ Cap, the secondary story by Michael Cho and Anthony Falcone is what I will remember from this issue. Cho and Falcone tell a simple immigrant story about Cap’s unlikely friendship with Brooklyn resident Sung Jin Jeong that was so beautifully told and so genuinely American.

To rescue the Daughters of Liberty trapped in Madripoor, Captain America and his closest allies marshal their forces – but waiting in the wings for them is the reborn Red Skull! Plus, the debut of the all-new Agent 13! PLUS: A second celebratory story by Michael Cho!

In “All Die Young, Part VI,” Cap, Sharon Carter, Falcon and Bucky are on a mission to save the Daughters of Liberty from Alexa Lukin, the Red Skull and some other baddies in Madripoor. Told primarily from the perspective of Carter, the story goes back and forth between her aunt Peggy’s history with Alexa and the current rescue mission. Alexa trained Peggy and both served together until Alexa apparently went off rails. The rescue mission is full of action packed art panels depicting Cap and Carter going through the evil Power Elite’s forces and trying to reach their friends in time. In the end, Alexa and the Red Skull board a helicopter to escape, just as Peggy gets free of her restraints and lunges after them, boarding the helicopter. However, Alexa hits Peggy with some blasts from her hand and Peggy falls precariously through the air. Sure seems dire for our dear Peggy, but given that our heroes have the Falcon amongst them, it doesn’t feel like we should be that worried.

In the secondary story, “The Promise,” written and drawn by Michael Cho and Anthony Falcone, Cap makes a surprise appearance at the funeral services of local Brooklyn resident Sung Jin Jeong, who was a Korean immigrant turned immigration attorney and a friend of Cap’s. Rogers tells the story of how they met when Jeong was working the night shift at a 24-hour diner. At first blush you’d think the two couldn’t be more different, but it turned out that the man from another time and the man from another country were kindred spirits with a shared love of the ideals that the United States stands for. Over the years, the two support each other through personal setbacks and encouraged each other through life accomplishments. Rogers’ eulogy is beautifully written, not only to honor the in-universe character, but really to send the clear message of what Captain America stands for, and what the United States should strive for.

The primary story was solid, with good action, fantastic art and some nice moments for each of the heroes involved. I particularly enjoyed Falcon taking out the goons early on in the issue. It was also nice to get the story from Sharon Carter’s perspective with Peggy’s history being the center of the story.

The show stealer of the issue though was easily the secondary story by Michael Cho and Anthony Falcone. The retro style art was perfect for the tone, and the story of immigrant Sung Jin Jeong’s friendship with Steve Rogers was beautiful and heartfelt. It was idealistic but not naive. It explicitly showed both Rogers and Jeong wrestling with what this country is supposed to stand for and what it actually is. Both recognized its failings and, most importantly, committed to making this country better in their own ways.

The primary story was heavy on action, with eye catching art, but light on actual plot development. Perhaps to leave ample room for Cho and Falcone to tell their secondary story, a worthwhile goal, but in the end, not a lot happens in the primary story. Maybe I’m jaded, but the “cliff hanger” with Peggy Carter being dropped off the helicopter didn’t move me because someone falling in the sky in a world full of flying superheroes doesn’t exactly seem to be the most terminal situation. I’m going to eat these words if Peggy actually dies but who’s putting money on that?

At one point, Rogers and Jeong are discouraged and are discussing the frustrating state of the country. Jeong makes the pointed comment, “You think that just because I love this country, I don’t see the flaws? Immigrants see the best and worst of America every day.” The page where Rogers finishes his eulogy, we see a panel from behind his back with a wonderful view of all the wonderful diverse attendees as Rogers says that Jeong’s story is his story, and “our story.” Captain America indeed.