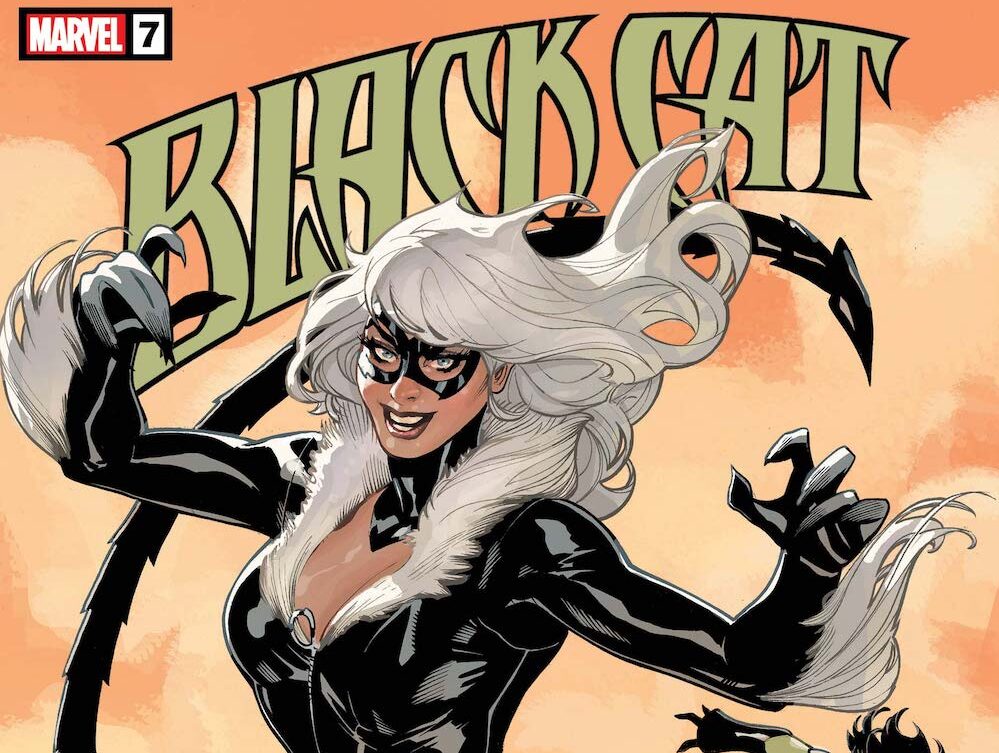 The tale of “The Gilded City” continues in Marvel Comics’ Black Cat #7. With Fox’s bargain with the Gilded Saint causing havoc in Manhattan, Felicia Hardy a.k.a. Black Cat, knows that she has to do something – but what? Is there even any way to put a stop to the madness? Well, you’ll just have to read the comic and see just what kind of heist Black Cat had planned.

Black Cat #7 is available now at your local comic book shop! Spoilers below!

Writer: Jed Mackay
Penciler: Michael Dowling
Cover Artist: Pepe Larraz
Black Cat’s actions of the last few years make her rethink who she is. The price of all the things Felicia and the Black Fox have stolen is finally tallied and the bill is due. And when a bill involves items from the Fantastic Four, Iron Man, Dr. Strange, Iron Fist and Wolverine, you can’t exactly take out a loan.

When Felicia Hardy began a new adventure with her father figure, Fox, she believed it would be a new chapter of excitement for the both of them. While she was partially right, the majority of fun to be had was by Fox, who tricked her and fated Manhattan to an unexpected demise. Now, while Felicia doesn’t consider herself to be a hero, she also knows she would never stand idly by and allow something like that to happen to her city. Despite her love for Fox, she cannot allow him to destroy the lives of over 1.6 million people; all for Fox to gain immortality.

Jed MacKay has been consistently knocking it out of the park in Black Cat thus far and the conclusion for “The Gilded City” is no different. With the loose ends between Felicia and Fox tied up (for now), it was interesting to see where this storyline would leave both of them. And while it was clearly a bittersweet ending for Felicia, she did what was necessary, used what Fox had taught her for years and bested him. MacKay did an amazing job at displaying the myriad of emotions that Felicia experienced in rapid succession, as well as Felicia’s prowess to set up her next big heist – even if it involves turning the tables on one of her oldest companions.

Witnessing Felicia’s inner turmoil throughout “The Gilded City” storyline proved to make her character relatable. It is likely that we’ve been faced with choices at some point or another where we had to think of the greater good instead of making the selfish choice. This is something that Felicia meets head-on. There is not much thought given to whether Fox is right in what he’s doing; Felicia just makes the executive decision herself, despite Fox being like a father to her. So, although she might not see herself as a hero, Felicia most definitely made the heroic choice and she did it with ease. Perhaps more of this Felicia will be seen in the future. Regardless of what happens, being able to witness the moment in the comic pages was great.

Paired with superb artwork by Michael Dowling with colours by Brian Reber, Black Cat #7 is a thrilling conclusion to the “The Gilded City” story arc. I find myself wondering just how MacKay is going to top himself once issue #8 comes around. It truly makes me wonder what’s next in store for Black Cat.