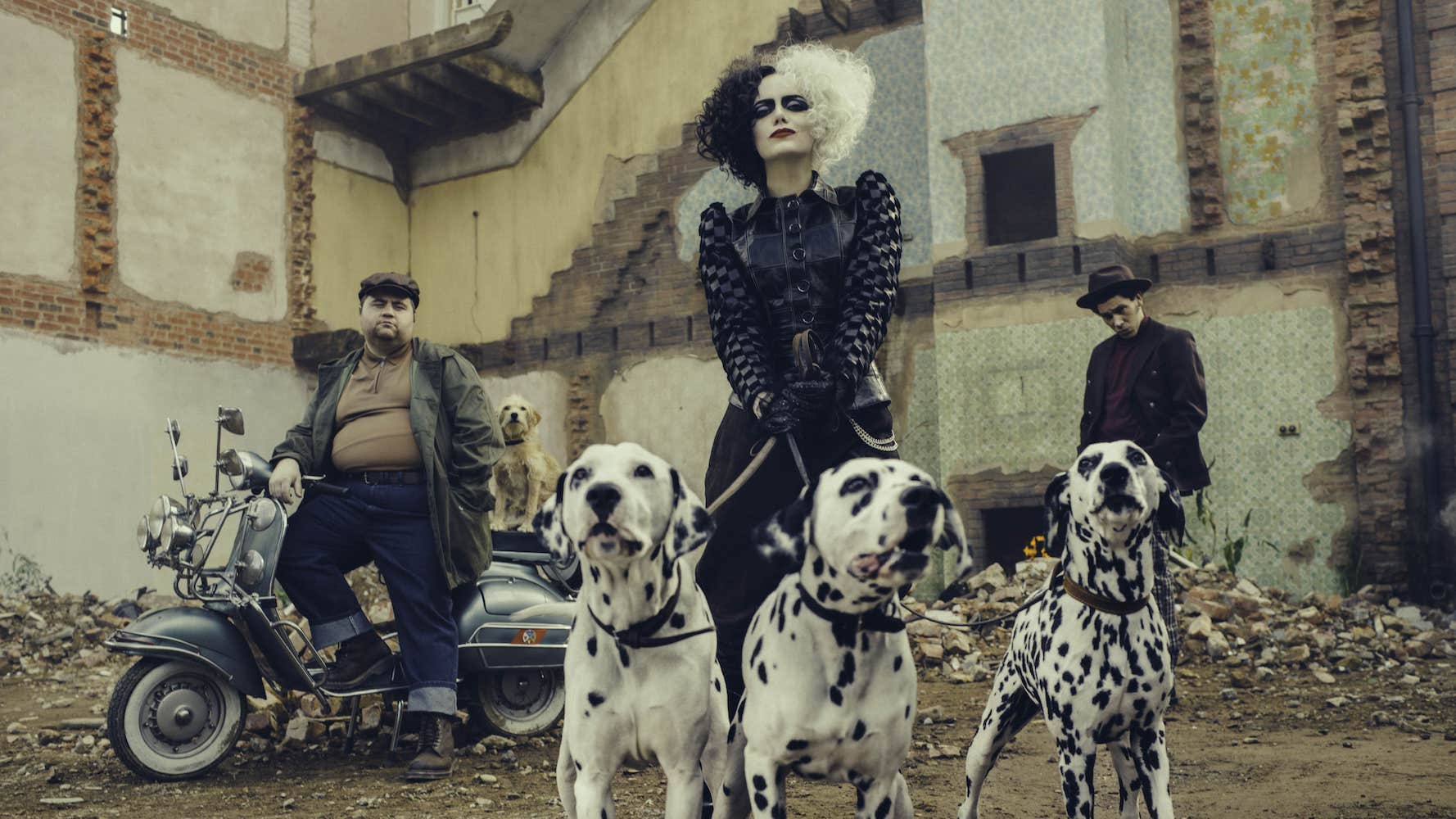 At first blush, the concept of Disney’s Cruella, a live-action film with Cruella de Vil as the protagonist, seems absurd. Cruella is one of Disney’s most notoriously vile characters, and my appetite for a story that humanizes the One Hundred and One Dalmatians villain was nonexistent. Still, if there’s a studio that has the creative cache to take some risks with its existing IP, it’s Disney, and what’s the point of having a roster full of iconic characters if you can’t play around with them a bit and mix things up?

When this film was first announced, I was skeptical. But the casting of Emma Stone in the titular role and Emma Thompson as her chief rival, reflected how strong the film’s concept was. You don’t get one of these Emmas, let alone both of them, with a shaky vision. Next, the marketing for the film was bold and exciting. Leaning fully into Cruella’s unique fashion aesthetics and born to be bad attitude, the trailers, music and art celebrated its main character’s dark and edgy persona.

Of course, casting and marketing don’t mean anything if the actual film doesn’t deliver. Cruella does deliver in many ways – its stars give predictably fabulous performances, it sets a new standard for eye-popping costumes and magnificent set design, and it boasts a pitch perfect soundtrack that carries the story from beginning to end. However, as much as Stone and Thompson shine, the supporting roles around them are undercooked. The plot, while mostly entertaining, is fantastical and in the end, strains the boundaries of credulity.

Disney’s Cruella premieres in theaters and on Disney+ on May 28th! Spoilers below!

Estella, a spirited young girl, struggles to conform to the restricting social boundaries imposed upon her at school. Her mother plans to move her to London, when she’s killed by a wealthy woman and her three vicious Dalmatians (!). Ten years pass and Estella (Emma Stone) is now a young woman, who made it to London, but survives on the streets with the help of two friends, Jasper (Joel Fry) and Horace (Paul Walter Hauser).

Thanks to Jasper and Horace, Estella lands a legitimate job at one of the biggest department stores in London, where she hopes to pursue her dream of working in fashion. She starts instead as a janitor, but through some serendipitous boldness and drunkenness, catches the eye of fashion icon, The Baroness (Emma Thompson).

The Baroness does her best The Devil Wears Prada impression, as a cruel and unforgiving boss, who fires her subordinates on a whim and strikes fear into everyone she works with. Estella, however, thrives through her tenacity and genius fashion talent, soon becoming The Baroness’ favored designer.

Later, Estella discovers that it was The Baroness who mercilessly murdered her mother all those years ago, and she is determined to get revenge and usurp The Baroness’ throne. Like Luke Skywalker, Estella struggles to find the balance between defeating her enemy, and becoming her enemy.

Ultimately, Jasper and Horace save Estella once again, reminding her of her humanity while still helping her exact revenge. As the film ends, Estella takes on the self-created identity of Cruella de Vil in tongue in cheek fashion, leaving open ended how she ultimately loses herself fully to her evil creation.

Emma Stone and Emma Thompson are both incredibly accomplished and beloved actors, and Cruella does a wonderful job of ensuring that both are given plenty of runway to exhibit their considerable talents. Both individually and together, Stone and Thompson are wonderful to watch and Cruella is worth the price of admission (or streaming) on their respective performances alone.

With a wry smirk on her face seemingly throughout the film, Stone genuinely looks to be having a great time being bad. It feels like the role was written with Stone specifically in mind and you can’t help but cheer for her, even while knowing the evil character she becomes.

After Stone and Thompson, the third and fourth stars of the film are easily the glamorous costumes, of which there are many, and the stunning set designs. Production designer Fiona Crombie and costume designer Jenny Beavan deserve all the praise, as the film’s aesthetics set a new standard for innovative style and presentation. The set pieces are bold and beautiful, somehow making the live-action film seem even more magical than its animated counterpart. Estella wears numerous dresses to publicly outshine and embarrass The Baroness, and each one is so creative and unique that most films would only dare to try one of those designs. There’s a scene where Estella stands on top of The Baroness’ car and completely envelopes her with her dress that I can’t get out of my mind. In another scene, Estella makes a grand entrance on a garbage truck and somehow makes it seem like the most glamorous carriage ever created.

I’d be remiss if I didn’t mention the film’s excellent soundtrack, which perfectly complements the film. With songs like “Feeling Good” by Nina Simone, “One Way or Another” by Blondie and “Come Together” by Ike and Tina Turner, Cruella perfectly integrates well known pop culture music into its story that really enhances the overall tone of the film.

Stone and Thompson shine so bright that there isn’t not much room for anyone else to stand out. Joel Fry and Paul Walter Hauser play the largest supporting roles, but their characters do little more than provide some moments of campy levity and help make Estella more sympathetic. Stone’s Estella is such an alpha in the group though that they never feel like a genuine found family. Of course, as we know, Jasper and Horace are in fact Cruella’s henchmen, but the film tries unsuccessfully to cast the trio’s relationship in a different light.

Kirby Howell-Baptiste plays Anita Darling, an old friend of Estella’s. Darling’s story is slightly different from the animated film (where the character is Anita Radcliffe), but while the history between she and Estella/Cruella remains intact, Darling is given so little to do that she barely impacts the story. She only appears in a handful of scenes and is awkwardly placed as a journalist who shows up and takes pictures. I definitely would have appreciated seeing more of Howell-Baptiste.

Cruella is about Emma Stone and Emma Thompson. And maybe that’s how it should be.

Another area of weakness is the overly fantastical plot, particularly towards the second half of the film and the climax. The first half, as Estella struggles to find her place and rises up the ranks of The Baroness’ business, is solid. However, while Estella’s plot for ultimate revenge looks great on screen (there’s a truly exceptional scene where all of the guests at The Baroness’ major gala are dressed in half black/half white and turn to stare at The Baroness in unison), it’s also unnecessarily absurd and not as clever as they hoped it would be.

Curiously, the film also ends without a clear bridge to the animated villain that we all know, which makes me wonder if a sequel is planned.

Cruella is not the most diverse film. While there are definitely diverse actors cast in background and supporting roles, of the characters that get significant screen time, Joel Fry’s Jasper and Kirby Howell-Baptiste’s Anita Darling are the only characters who are clearly people of color. I appreciate the intentional race-bending of Jasper and Darling, both of whom are white characters in the animated classic. I might have preferred if they went all the way and made Horace a character of color as well.

Of course, race-bending itself is not enough, and without some other structural adjustments, having Emma Stone as a white woman bossing around two people of color wouldn’t look so great either.

Another ambiguously diverse character is fashion designer Artie, played by British theater actor John McCrea. Artie is an ally of Estella’s and is coded LGBTQ+, but that is never made explicit in the film.

Films need to intentionally include fully fleshed out diverse characters with genuine arcs and stories. Having a race bent or coded character just show up on screen isn’t enough.

The things that Cruella does well, like spotlight its stars and complement them with fantastic visuals, it does extremely well. In other areas, it stumbles a bit, with lukewarm supporting roles and a overly fantastical plot. But because the highs are so high, Cruella is worth watching, especially if you enjoy Emma Stone and Emma Thompson.