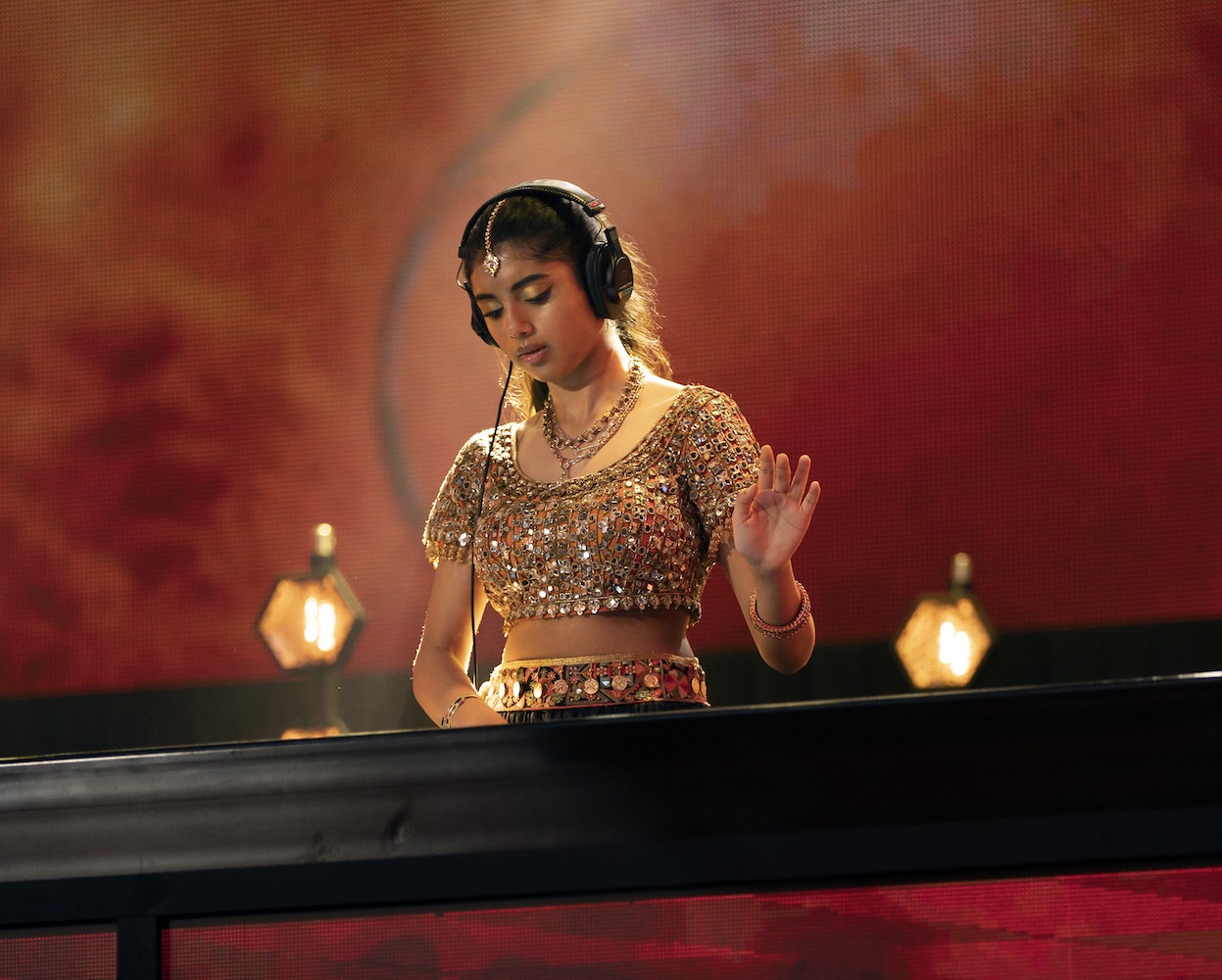 I thought I knew exactly what kind of movie Spin was going to be, but director Manjari Makijany, who is Indian, and writers Carley Steiner and Josh Cagan, took the film in a pleasantly surprising direction that truly strengthens the story and overall message.

Being that this is a Disney Channel film that stars an Indian American girl and is directed by an Indian woman, its mere existence is a win for diversity. To be sure, the plot is a little too neat and the central conflict a bit undercooked, but the fact that Spin is a film that young girls and their families can experience and appreciate together makes it worth celebrating.

Spin premieres on the Disney Channel on Friday, August 13th at 8 PM! Spoilers below!

“Spin” follows Rhea, a relatable Indian American teen who discovers her passion for creating DJ mixes that blend the rich textures of her South Asian culture and the world around her. Her life revolves around her eclectic group of friends, Molly, Watson and Ginger; her after-school coding club; her family’s Indian restaurant; and her tight-knit, multigenerational family, which includes her father, Arvind, younger brother Rohan and her grandmother, Asha. Everything changes when she falls for aspiring DJ Max, and her long-lost fervor for music is re-ignited. Rhea discovers that she has a natural gift for creating beats and producing music but must find the courage to follow her true inner talent.

The Disney Channel is a reliable and trustworthy source of enjoyable programming that families and young viewers can enjoy. As a parent, that’s no small thing. Lately I find it challenging to find shows and films that both my daughter and I can watch together. Thankfully, Spin is a family friendly film that has a strongly positive message both for young women and women of color.

At first it feels like Spin is going to be a teen romance between Rhea and Max aka DJ Union Max (Michael Bishop), who is a British transfer student. The two quickly connect over their mutual love of music and Max’s appreciation of Rhea’s Indian family and culture. Their relationship is cute, but a little too cute.

Rhea helps Max land a big gig to DJ an event hosted by her influencer friend Ginger (Kerri Medders), and the two work together to create the right music for the occasion. Everything seems perfect for their budding relationship. That’s when the film takes a surprising turn, and a very welcome one.

Max celebrates a successful performance at the Festival of Color by taking all the credit and completely ignoring Rhea’s contributions. Women of color will likely see that moment coming from a mile away. That’s when it becomes clear that Spin isn’t a rom-com at all. Instead, it’s a film that celebrates independent young girls. Rhea confronts Max, who quickly claims that she’s “being dramatic.” Rhea’s friends, Ginger, Molly (Anna Cathcart) and Watson (Jahbril Cook), aren’t having that. “What does it mean when a man says a woman is being dramatic? He’s a filthy liar,” they say collectively.

Faced with the reality that people like Max will happily take credit for her hard work, Rhea is determined to take control and learn to be a DJ on her own. However, she knows she can’t do it alone and fortunately doesn’t need to. Rhea has encouragement, affirmation and support all around her in the form of her three best friends and her grandmother (Meera Sya).

Predictably, the film culminates in a DJ battle at an event called the Battle of the Beatmasters. There, Max makes a half-hearted effort to apologize, to which Rhea responds, “There isn’t about you. It’s about me.” When Max says “I respect that,” Rhea answers, “I don’t care.”

It may sound overly harsh, but Avantika manages to deliver the line perfectly and without unnecessary pettiness. I was so pleased to see that moment play out, and I can only hope that all the young girls watching this film remember that scene and take it to heart.

Often the downside to “family friendly” is that the stories are a little too neat; too convenient. Spin suffers from some of those issues. The characterizations of Rhea, her friends and her family are simplistic and one note. Rhea is essentially every immigrant family’s dream daughter; she has a substantial sense of responsibility, she never complains about those burdens, and she always has a bright and shiny attitude. Her friends and family are essentially the same, with very few additional layers.

In particular, Rhea’s family is incredibly supportive of her desire to pursue DJing, which is hardly a conventional hobby. Not that I disapprove of a message that families should encourage young girls to pursue their passions, but I would have liked to see the potential conflict within her family explored more. Rhea misses a shift at her family restaurant because she got caught up DJing and her father’s only response is to ask if she’s happy working for him. There is no mention of the consequences of her actions and her father isn’t even angry. That moment is too idyllic even for the Disney Channel.

Many children of immigrants struggle with managing family obligations beyond those of their white American friends and the inevitable resentment that brews. While Spin didn’t necessarily have the time to delve deeply into that element of immigrant families, it would have felt more authentic if those tensions were represented more.

Spin is a wonderful celebration of diversity. The cast is full of diverse characters and the film makes it a point to center and celebrate Indian culture. Rhea and her music represent a blend of traditional immigrant and American cultures and it’s the kind of balance that every child of immigrants wrestles with. How do we keep our culture alive while embracing what it means to be American? Spin encourages people to embrace their family traditions and it’s the kind of message that many children (and adults) need to hear. Watching Rhea put on her mother’s Indian jewelry and integrate Indian music into her performance was predictable, yet powerful.