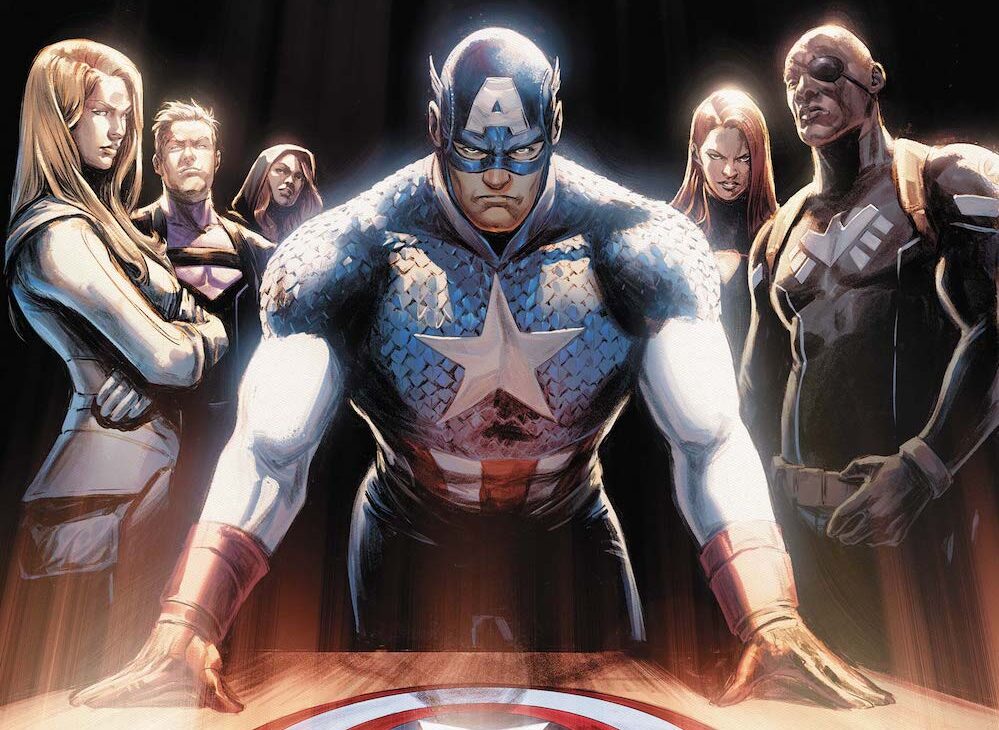 Steve Rogers may be a super soldier, but that doesn’t mean he can’t get injured. And right now, he’s hurt badly, emotionally and physically. Even though his best friend has betrayed him, Steve is reminded of his support system and the heroic friends he’s fortunate to have — as well as their shared willingness to stop evil.

Captain America: Sentinel of Liberty #7 is available now at your local comic book shop! Spoilers ahead!

Writer: Collin Kelly, Jackson Lanzing
Penciler: Carmen Carnero
Color Artist: Nolan Woodard
Just when Captain America is ready to quit his pursuit of the Outer Circle, he receives intel on their next move – and a reminder that Steve Rogers is never without friends. Sharon Carter returns to help Steve assemble his allies for a new mission – but some shadows reach farther than even the world’s best spies can predict.

REVIEW – A Super Soldier and His Super Support System

Flip to just the first page of Captain America: Sentinel of Liberty #7, and you’ll instantly be in awe of the phenomenal artwork and spectacular coloring by Carmen Carnero and Nolan Woodard, respectively.

The writing duo of Collin Kelly and Jackson Lanzing continue to do a tremendous job with this series. How do you not cry over a line like, “My body can mend a broken bone in two weeks. But the bullet still hurts.”? It’s a short but straightforward set of statements that carries such an intense weight and captures Steve’s introspection spot-on.

From start to finish, the art is the standout of this issue. This isn’t to say that it hasn’t been excellent throughout this run (it has), but there’s something about the featured settings and array of emotions in this issue that let the artwork shine even more. From despair at the waterfront to the shift toward hope in Steve’s Lower East Side home, the drawings and coloring work in tandem to bring sentiment to life while utilizing a style that perfectly befits a story centered around a man out of time from the 1940s.

While the focus of this issue is on Steve and his allies, the decision to open the narrative with Namor is interesting and intelligent. Namor has been on both the supporting and opposing sides of Captain America in the past and his perspective on the situation with the super soldier and Bucky Barnes provides a necessary outside look for both the titular character and the reader. It’s also a good segue into introducing, in this series, his other friends—starting with his love, Sharon Carter.

The way she’s introduced is perfect. It’s a great way to show off their dynamic as a couple. Sharon lifts Steve’s mood and gives him someone he can be completely honest with — in a way he can’t be with the everyday people he befriended from his art class. Sharon being there doesn’t solve everything, and it shouldn’t, but she does mark that shift toward hope and doing the work to end the evil ahead of them.

When Steve asks for some of his allies to assemble, they all show up—to his surprise—putting him back in that familiar and natural leadership role.

Once the group gathers, the story slows down, which is understandable, but it starts to drag a tad. Fortunately, the slowdown turns out to just be the quiet yet serious calm before the storm that is the plot twist conclusion of this issue!