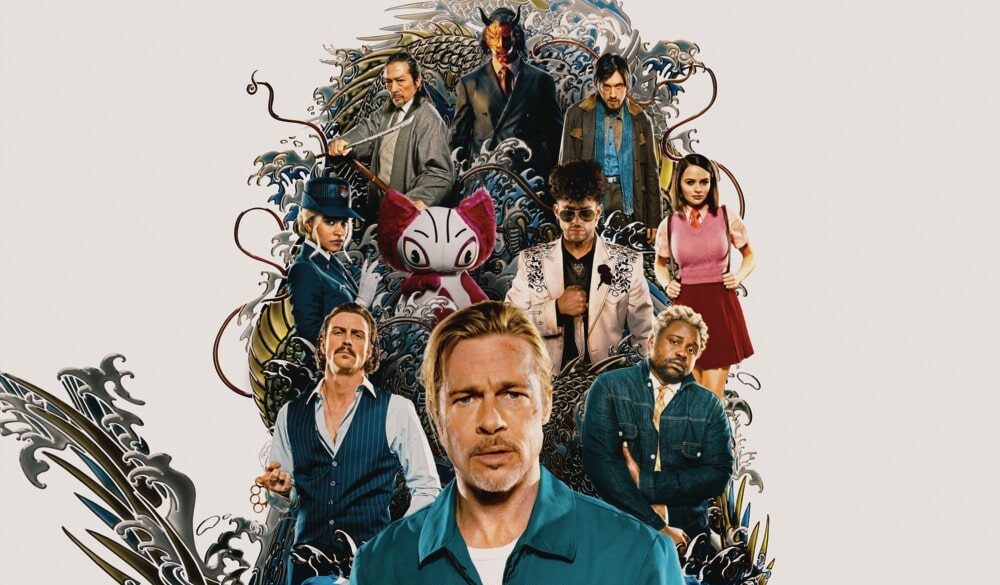 In the current landscape of movies, there are countless prequels, sequels, spin-offs and every other way to expand an existing franchise for the foreseeable future. David Leitch and Antoine Fuqua’s Bullet Train looks to break up that trend. Adapted from Kōtarō Isaka’s Japanese thriller novel MariaBeetle, the film is given an impressive big-screen treatment, featuring some of the biggest stars in the industry and epic, hyper-violent action sequences.

REVIEW – A Gripping Tale of Revenge Under Neon Lights

Starring Brad Pitt as the somewhat-reformed hitman “Ladybug,” and featuring a bevy of Hollywood’s freshest and favorite faces, Bullet Train starts at a rapid pace and stays there until the end—but speed through the movements this ride does not. The frenetic pacing is balanced out by glimpses and flashes of each character’s backstory: We get a supercut of The Wolf’s life just as the character appears on screen; we get glimpses of Lemon and Tangerine’s chaotic missions across the world (Joburg especially), and similar backstory flashes for all the key players. It’s artistic touches like these that keep the viewers both constantly engaged and also informed.

As deaths pile up across the train tracks, Bullet Train doesn’t play out like your run-of-the-mill whodunnit. Instead, it blends a gripping tale of revenge with a swaggering, grandiose, and aggressively neon aesthetic that takes cues from great action directors from both the Eastern and Western hemispheres (think Chad Stahelski meets John Woo).

The chemistry between the cast members is what gives the film so much of its life. Aaron Taylor Johnson and Bryan Tyree Henry’s comedic timing are stellar and complement their exaggerated characters; Hiroyuki Sanada and Andrew Koji portray a father and son’s strained relationship with both gravity and sensitivity. With performances this good, it’s hard to pick a favorite.

That said, the movie does make some marked alterations from Isaka’s original novel upon which it’s based. While the original cast members of the book are exclusively Japanese, the Hollywood adaptation features a much more ethnically diverse lot. With Brad Pitt, Bad Bunny, Joey King, Bryan Tyree Henry and many others in the film, the goal behind the casting was obviously big box office draw. Understandably, this could cause some concern, but as Hiroyuki Sanada himself pointed out, the changes make it a more international movie.

Fortunately, there is a lot of sensitivity and care given to not just Japanese culture, but with respect to the Japanese characters throughout the film (in addition to Sanada and Koji, the film includes other notable actors of Japanese descent, including Masi Oka, Karen Fukuhara, and Yoshi Sudarso.). It doesn’t lean on racist caricatures, and it doesn’t use the culture to prop up the white savior trope like one might fear from a blockbuster race-swap. Bullet Train plays out like a very specific set of events that happen to occur in Japan, as opposed to fetishizing the location and its people.

Having said that, the reality remains that a movie based on a Japanese novel, that takes place in Japan should still have had, at a minimum, a Japanese or Japanese-American lead. Sanada and Koji are definitely given weight and substance with their characters, including genuinely well developed backstories. And while it’s no surprise that any studio would want to highlight a mega-star like Brad Pitt to help sell its film, the source material warranted stronger representation of Japanese actors.

Overall, Bullet Train hits a bullseye of action, comedy, ample amounts of drama and a mostly heartfelt message, in its two-hour visual feast of a runtime. Probably, it won’t be a perfect strike for everyone, but this is a story that I would love to see live on in at least one or two more films.