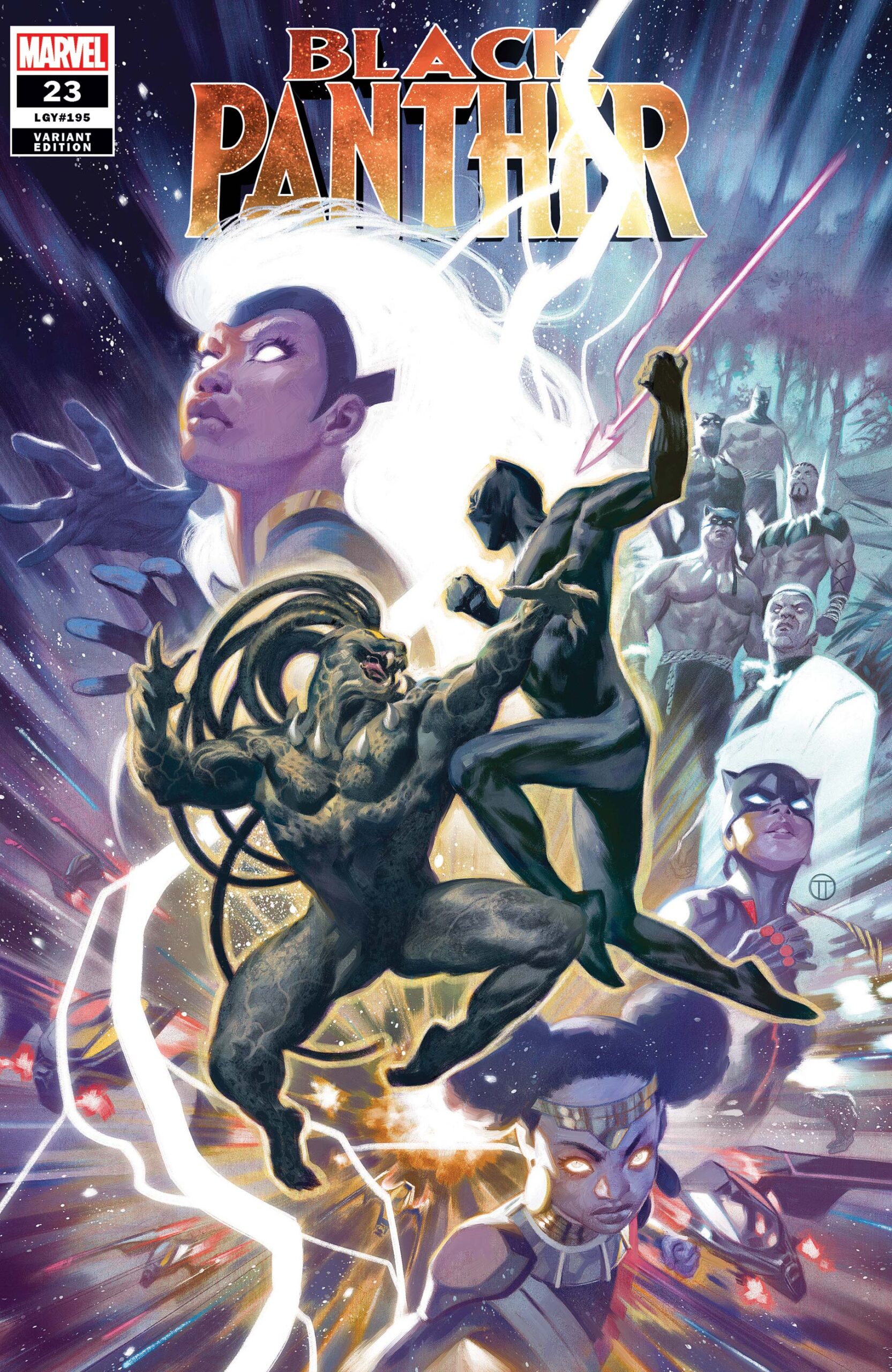 It’s almost hard to believe that Black Panther #22 by Ta-Nehisi Coates and Daniel Acuna released on March 25, 2020. Now, nearly a full year later, we’re finally getting issue #23, The book is worth the wait though, as the battle between the Wakanda that we know, called Wakanda Prime, and the Intergalactic Empire of Wakanda, heads quickly towards its climax.

This run by Coates, who is also writing Captain America, has had some mixed reactions from Black Panther fans. However, as we near the end of his time on the book with issue #25, I’m really appreciating the ambitious and innovative story that Coates and Acuna have been telling.

Black Panther #23 is available now at your local comic book shop! Spoilers below!

Writer: Ta-Nehisi Coates
Penciler: Ryan Bodenheim, Daniel Acuna
Cover Artist: Daniel Acuna
THE INTERGALACTIC EMPIRE OF WAKANDA – “WAKANDA UNBOUND” part 5: THE POWER OF THE NAMELESS! The Intergalactic Empire of Wakanda turned their legendary king into a slave. Now the king is restored — and after years of effort, the gates of the Empire will swing wide open as the Black Panther makes one final attempt to free the ranks of the Nameless across the five galaxies.

There’s a brief moment of respite in the battle between Wakanda Prime and the Intergalactic Empire of Wakanda. Emperor N’Jadaka, now inhabiting the newly resurrected body of Erik Killmonger, is struggling internally with the symbiote that gives him his powers and consequently fighting to maintain control of his forces. Meanwhile, T’Challa is consolidating his own forces, both from his Wakandan fighters, as well as with reinforcements from the superhero community. Everyone from Storm, to Riri Williams, to Miles Morales have joined the cause, and T’Challa gives a stirring speech inspired by the sacrifice of the galactic version of Nakia from the previous issue.

Meanwhile, Queen Ramonda heads to a mystical prison below Lake Nyanza. where what apparently are magical indigenous Wakandan beings have been held captive for eons. She appeals to them to join T’Challa’s fight against the Empire and offers reparations for their crimes of the past.

Finally, the four Orisha gods have mysteriously appeared just above Wakanda’s skyline with no explanation. As T’Challa, Ororo, Jericho and Shuri consult to determine the intent of the gods, Bast in human form suddenly shows up, opening a magical gate through which the Intergalactic Empire’s forces have invaded Wakanda.

It was great to reconnect with this story again. With only 3 issues left in Coates’ run, this issue was a moment of rest and preparation before what I expect to be two final issues of intense action. Watching both T’Challa and N’Jadaka prepare their respective allies and forces felt like two chess masters mentally preparing for a final match. What was also fascinating was seeing how the uncontrollable elements, the gods, were factoring into their respective plans. T’Challa is known in the Marvel universe as a master strategist, but even he struggles with the unknown of whimsical gods who could completely shift the tide of any battle.

Possibly the single most fascinating scenes were with Queen Ramonda and the imprisoned mystical indigenous beings. Their conversation about how the Wakandans stole their lands and Ramonda’s offer of reparations was so layered and weighty that only a writer like Ta-Nehisi Coates could navigate it. I’m going to miss Coates on this book for those moments.

There’s very little action in this issue. The standout moments are conversations between various characters, and T’Challa does little more than give an inspirational speech. That’s not necessarily what comic fans are used to.

This issue is the calm before the storm. And while Coates has to stay true to the way his story was laid out, it’s the unfair reality that the COVID induced one-year layoff between issues puts a lot of pressure on this issue to be amazing.

Coming back to this story at this point will be challenging for most readers. Not only do they have to refresh their memory with the issue immediately before it, but many may need to re-read the whole 22 issue run to make sense of everything. That’s a substantial burden on any comic fan.

Black Panther of course is the standard bearer of excellent diverse superhero storytelling. This issue is great on another level because it incorporates not only the Wakandan heroes that we know and love, but also brings in nearly every major Black superhero in Marvel Comics. They don’t do anything this issue, but it’s just exciting to see them all together, unified in their goal of defending Wakanda.