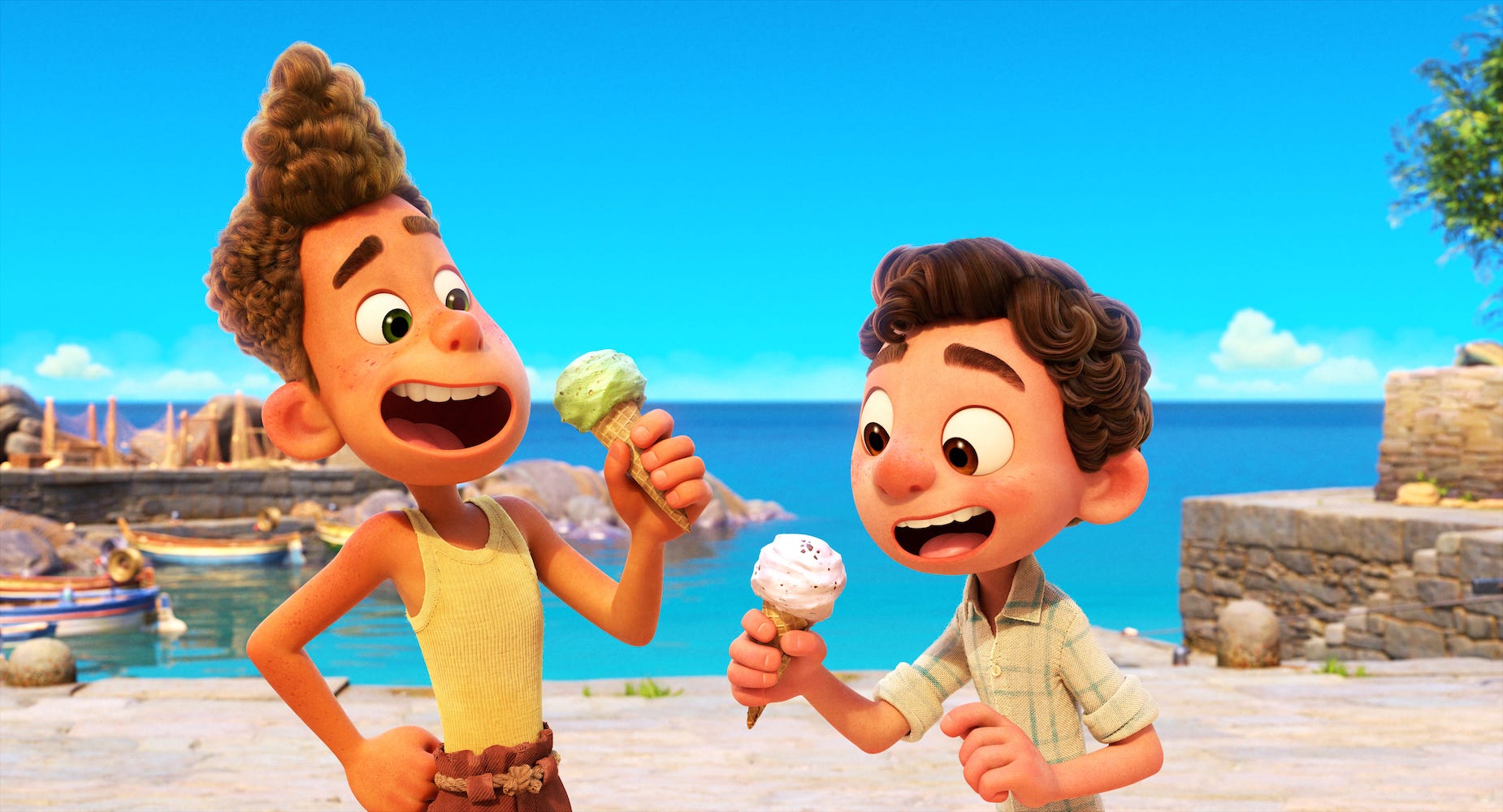 Pixar’s latest film, Luca might just be the perfect summer movie. It’s bright, joyful film about friendship and discovery. It also takes place in a fictional seaside town on the Italian Riviera that would be an ideal place to spend summer vacation.

In my review for the film, I wrote that Luca felt like a beautiful children’s picture book come to life, and if so, the author if that picture book would be director Enrico Casarosa.

It was readily apparent from everyone involved that the joyfulness on screen was an extension of the joy that the cast and crew felt in creating the film and helping to realize Casarosa’s vision. Luca was inspired in part by Casarosa’s own childhood growing up in the Italian Riviera, where he also had a friend like Alberto.

I was born in Genoa, which is this poor town right on the riviera. And I was a shy kid, a little bit sheltered by my family. And when I met my best friend at 11, kind of my world opened up. He was a bit of a troublemaker; he didn’t have a whole lot of supervision. [Laughs] And so, in those special kind of summers when you’re growing up and kind of finding yourself, I was kind of following him and getting dragged into, uh, troubles. And it really made me really think about how much we find ourselves with our friendships, or how much friendships help us find a bit who we wanna be.

Because the film is such a personal story for Casarosa, the cast felt that they were living his story and bringing it to life. When asked by journalist Nicky Fowler what their favorite part of making the film was, Maya Rudolph, who voiced Luca’s mother, talked about how much she enjoyed working with Casarosa.

“[M]y favorite part was getting to work with Enrico. I felt like that was when everything just kinda was like joyful and fun and funny….And, hearing you know, and getting to see Enrico’s vision, I did feel those feelings of, sort of, this sweet story, timeless, there’s-there’s something very personal here,” Rudolph said.

Rudolph’s on screen husband, Jim Gaffigan, echoed her statements, saying that the personal nature of Luca made the project that much more enjoyable for the cast. “I think that, you know, to Maya’s point, it did feel like we were working on something very personal to Enrico. So, that was kind of exciting,” Gaffigan said. “It didn’t feel like a job. It felt like capturing someone’s vision, and tone, which is always something funner than just trying to land a joke.”

Journalist Kaitlyn Hogancamp asked about the main themes that the cast hoped to take from the film, and Jack Tremblay, who voiced Luca, talked about embracing the fearlessness that his character learned. “I think we all can learn a lot from this movie, but for me, that ‘Silencio Bruno’ part, I really like how it’s…I guess it’s a good way of, like, using your words to kind of, you know, silence your, I guess your anxiety about certain things,” Tremblay said.

For Jack Dylan Grazer, who voiced Alberto, the main idea he took away was authenticity. “[T]he overarching message in this film is being comfortable in your skin and not dressing the part for anybody but yourself, and just being at peace with your authentic self,” Grazer said. “Not having to hide, or be ashamed of who you truly were born to be, born to shine as. And also finding the right friend who can lift you up and help you evolve in that way.”

Finally, Emma Berman, who made her feature film debut as the voice of Giulia, strongly connected to the resilience of her character. “I think one thing that we can all learn from Giulia is how she just, like, she just keeps trying. She joins the Portorosso cup every single year, and she doesn’t win, she just keeps pushing, and for me that relates, like keep auditioning for acting…And I think that we can all take that into our personal lives no matter how old we are or what our careers are,” Berman said.

With the various themes about growing up, self discovery and identity, Luca is the quintessential summer movie. It’s a story that almost everyone can relate to, and also reflects how important summers are to the growth and development of children. Gaffigan talked about how this film made him realize the enduring impact that childhood summers have to so many.

[W]hat’s so interesting about this movie and the notion of summer is it made me realize we have such, as adults, we have such an expectation of, or a pressure, surrounding summer; like enjoying summer. And I think some of that’s established as kids, really, you know, having this idealized summer. And I feel like in this movie there is capturing that truly romantic notion of summer being about freedom. And, you know, as adults we kind of chase it. We’re kind of like, all right, we chase it in these two-week windows of vacation or a long weekend. And so I thought that was really moving how it kind of stirred up that memory and how, you know, being a kid was really fun.