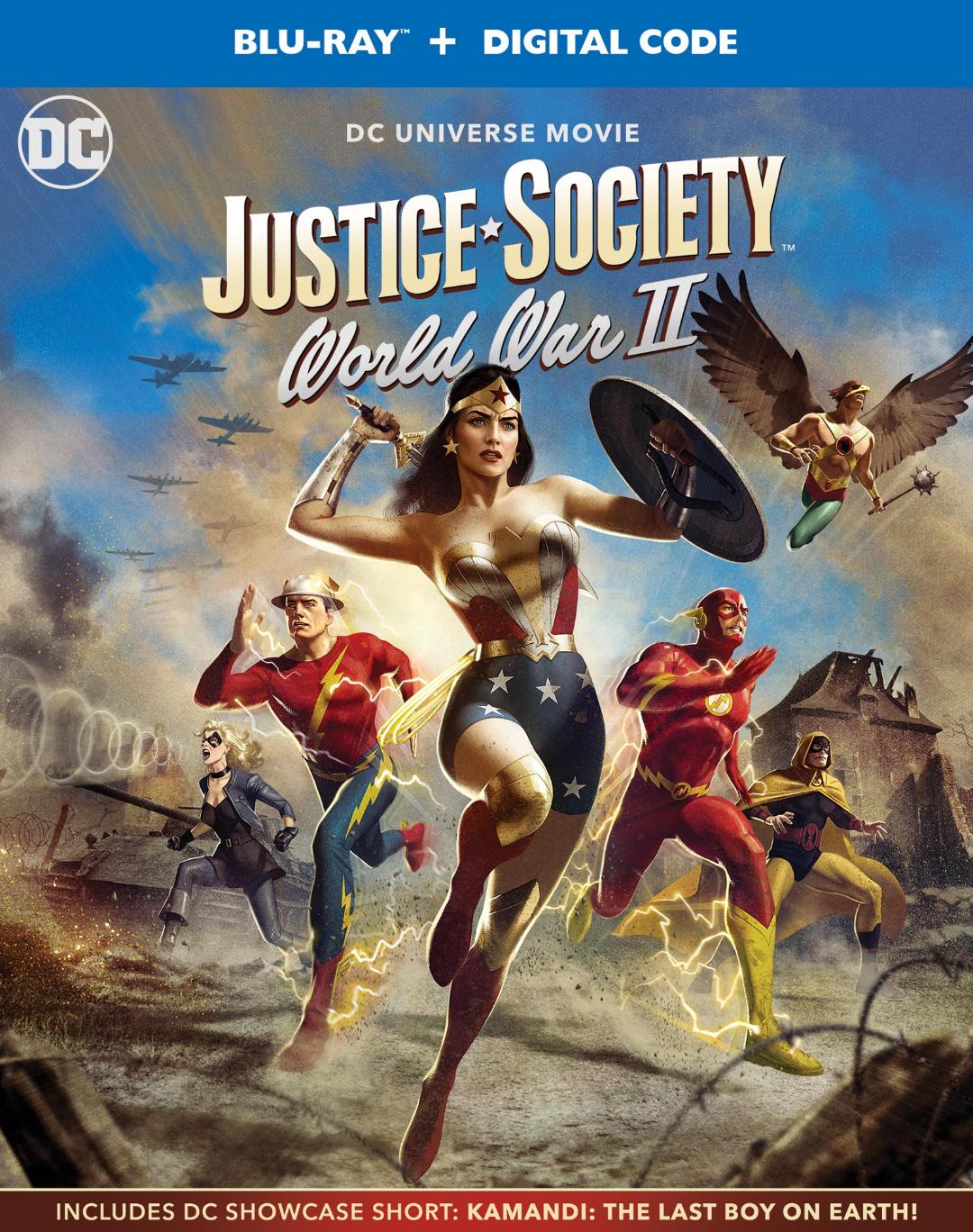 The next DC animated film from Warner Bros. Animation and DC is Justice Society: WWII! Wonder Woman, Flash and the rest of the Justice Society are taken back in time to fight the Nazis during World War II!

Check out images from the film, the official trailer, and all the details below!

Produced by Warner Bros. Animation and DC, the feature-length animated film will be distributed by Warner Bros. Home Entertainment on Digital starting April 27, 2021, and on 4K Ultra HD Blu-ray Combo Pack and Blu-ray on May 11, 2021.

THE FLASH SPEEDS ACROSS TIME TO HELP A

FOR FIRST JUSTICE SOCIETY of AMERICA STORY IN

BURBANK, CA (February 4, 2020) – The Flash speeds into the middle of an epic battle between Golden Age DC Super Heroes and Nazis in Justice Society: World War II, the next entry in the popular series of the DC Universe Movies. Produced by Warner Bros. Animation, DC and Warner Bros. Home Entertainment, the feature-length animated film will be released on Digital starting April 27, 2021, and on 4K Ultra HD Blu-ray Combo Pack and Blu-ray on May 11, 2021. The film is rated PG-13 for violence and some bloody images.

Justice Society: World War II finds modern-day Barry Allen – prior to the formation of the Justice League – discovering he can run even faster than he imagined, and that milestone results in his first encounter with the Speed Force. The Flash is promptly launched into the midst of a raging battle – primarily between Nazis and a team of Golden Age DC Super Heroes known as The Justice Society of America. Led by Wonder Woman, the group includes Hourman, Black Canary, Hawkman, Steve Trevor and the Golden Age Flash, Jay Garrick. The Flash quickly volunteers to assist his fellow heroes in tipping the scales of war in their favor, while the team tries to figure out how to send him home. But it won’t be easy as complications and emotions run deep in this time-skipping World War II thriller.

DC Showcase – Kamandi: The Last Boy on Earth! (New Animated Short) – Jack Kirby’s beloved DC comic creation features the last civilized teenage boy on a post-apocalyptic Earth ruled by talking animals. In this short, Kamandi and his friends Prince Tuftan of the Tiger Kingdom and humanoid mutant Ben Boxer are kidnapped by a gorilla cult dedicated to finding the reincarnation of their god, The Mighty One. Golgan, the cult’s leader, puts Kamandi’s team through a series of deadly tests to find if any of them know the secret of … The Mighty One.

Look Back – Wonder Woman: Bloodlines (Featurette) – An intriguing glance into the production behind 2019’s Wonder Woman: Bloodlines, which finds Amazon Princess Diana helping a troubled young girl enlisted by a deadly organization known as Villainy, Inc., whose criminal members have their sights set on invading Themyscira. The expansive adventure is packed with brutal battles, mysterious mythology, and endless wonder!

From the DC Vault: Justice League: “Legends, Part One”

Justice Society: World War II will also be available on Movies Anywhere. Using the free Movies Anywhere app and website, consumers can access all their eligible movies by connecting their Movies Anywhere account with their participating digital retailer accounts.

Movies Anywhere is a digital movie platform that enables movie fans to discover, access, and watch their favorite digital movies in one place. Movies Anywhere brings together a library of nearly 7,500 digital movies from Sony Pictures, Twentieth Century Fox Film, The Walt Disney Studios (including Disney, Pixar, Marvel Studios and Lucasfilm), Universal Pictures (including DreamWorks and Illumination Entertainment) and Warner Bros., and will continue to expand the consumer experience as more content providers, digital retailers and platforms are added. By connecting participating digital retailers that include Amazon Prime Video,  the Apple TV app, FandangoNOW, Google Play, and Vudu, movie fans can now bring together their digital movie collections (whether purchased or redeemed) in one place and enjoy them from the comfort of their living rooms, and across multiple devices and platforms, including Amazon Fire devices; Android devices and Android TV; Apple TV, iPhone, iPad and iPod touch; Chromecast; Roku® devices and popular browsers. Movie fans can also redeem digital codes found in eligible Blu-ray and DVD disc packages from participating studios and enjoy them through Movies Anywhere. Movies Anywhere – your movies, together at last.

Digital movies or TV episodes allow fans to watch a digital version of their movie or TV show anywhere, on their favorite devices. Digital movies or TV episodes are included with the purchase of specially marked Blu-ray discs. With digital, consumers are able to instantly stream and download movies and TV shows to TVs, computers, tablets and smartphones through retail services. For more information on compatible devices and services go to wb.com/digitalmoviefaq. Consult a digital retailer for details and requirements and for a list of digital-compatible devices.

Warner Bros. Home Entertainment (WBHE) brings together Warner Bros. Entertainment’s physical and digital distribution businesses in order to maximize current and next-generation distribution scenarios. An industry leader since its inception, WBHE oversees the global distribution of content through packaged goods (Blu-ray Disc™ and DVD) and digital media in the form of electronic sell-through and video-on-demand via cable, satellite, online and mobile channels. WBHE distributes its product through third party retail partners and licensees.

DC, a WarnerMedia Company, creates iconic characters, enduring stories, and immersive experiences that inspire and entertain audiences of every generation around the world and is one of the world’s largest publishers of comics and graphic novels. As a creative division, DC is charged with strategically integrating its stories and characters across film, television, consumer products, home entertainment, interactive games, DC UNIVERSE INFINITE digital subscription service and community engagement portal. For more information visit dccomics.com and dcuniverseinfinite.com.